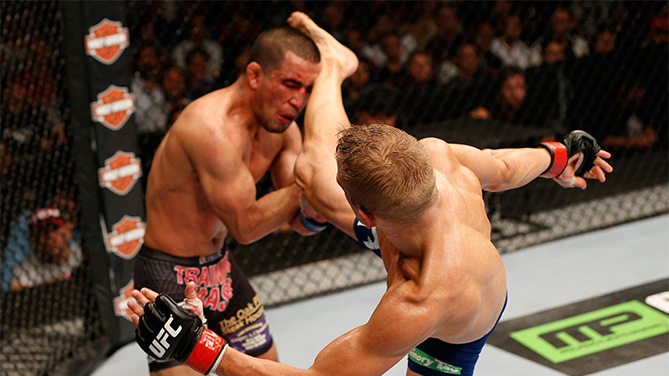 After scoring the biggest upset of 2014 by beating Renan Barao in May, TJ Dillashaw could have been the victim of the biggest upset of all-time Saturday night at Sleep Train Arena in Sacramento, but the UFC bantamweight champion made the best of an awkward situation as he retained his crown with a fifth-round knockout of late replacement Joe Soto.

How awkward and how late? The veteran Soto, who was scheduled to make his UFC debut Saturday against Anthony Birchak, was called into action Friday afternoon when Barao was pulled from the fight after collapsing during his weight cut. It wasn’t the easiest task for either fighter, but they both showed up and fought, thrilling the fans in attendance.

And even though Dillashaw spoiled Soto’s Rocky story, he also got his championship reign off to a solid start.

Dillashaw kicked off the bout by switching stances and using angles to keep Soto guessing. A leg kick knocked an off-balance Soto to the deck briefly, and as Soto subsequently caught a kick, the champion used his fists to get the bout to the mat. Dillashaw immediately took Soto’s back, but the challenger got to his feet and broke loose. Soto showed no nerves, and though he was coming up just short of landing a fight-changing right hand, he made up for it in the closing seconds with solid work in an exciting back-and-forth exchange.

The late-round slugfest from round one continued into the second stanza, and at close range, Soto was winning the exchanges. But as soon as Dillashaw got some punching room, his speed and angles gave the challenger trouble, and his ‘death by a thousand cuts’ punching strategy was yielding dividends.

Soto drew blood from Dillashaw’s cheek in the third, but the champion returned the favor by 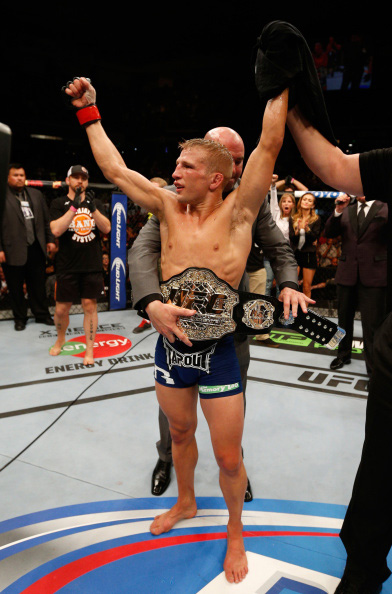 bloodying Soto’s nose, and the Sacramento product was still in control of the bout with his volume striking attack. In the third minute, Dillashaw scored the first takedown of the fight, but the two got up almost immediately. And while Soto rallied briefly in the final minute, it was Dillashaw getting the final word with a series of flurries.

There was more of the same in the fourth round, with the exception of some ground and pound work in the final minute by Dillashaw, and the result was the same, as the champion put another round in the bank.

Soto sought a takedown to begin round five but was turned back, and Dillashaw punished his foe in response with a multi-shot combination. From there, it was a matter of maintaining what he had done over the previous four rounds, but Dillashaw wanted more and he got it, rocking and dropping Soto with a right kick to the head. His follow-up shot on his grounded foe ended the bout, with referee John McCarthy stepping in at the 2:20 mark.

With the win, the 28-year-old Dillashaw improves to 12-2; Porterville’s Soto, 27, falls to 15-3. At the time of the finish, Dillashaw led 40-36 on all three scorecards.
> Watch: T.J. Dillashaw and Joe Soto Octagon Interviews