Daniel Cormier has had a lot of good years in his athletic career.

“I think that was probably the greatest athletic year I’ve ever had,” said Cormier. “Not only from the success I had, but just everything – my life, my body holding up, my ability to train, my team in order – everything was good from top to bottom. It was a really, really good year for me.”

Perhaps what made it so special is that it could have gone drastically wrong as soon as it started.

In action in January, Cormier risked his light heavyweight crown against top contender Volkan Oezdemir, a fighter with the kind of power to remove crowns from heads with one swing of his fist. Yet as soon as the two locked horns at UFC 220, Cormier was firing on all cylinders, and it took him less than two rounds to halt Oezdemir.

It was a nice start to 2018, but a July matchup with heavyweight champion Stipe Miocic was going to determine more than how the year would end. For Cormier, a win over Miocic would change the narrative on his career. Was he the fighter who beat everyone but Jon Jones, an elite light heavyweight but not the best of his era? Or was he going to be a champ-champ, an all-time great who ruled two weight classes? That’s a lot to put on 25 minutes in the Octagon and Cormier knew it. But he didn’t run away from such pressure. He never has.

“I let myself think of that,” Cormier said. “I let myself think of how my career will be viewed if I get this done tonight. If I do what I know I’m capable of doing, my career will be viewed through a completely different lens. It’s not the same. You’re looking at a guy who now stands among the greatest fighters to ever do it. It’s hard to really list a group of fighters as the best and leave me off if you’re being objective. To lose two fights to one guy and that’s it in your whole career and blaze through everybody else. Outside of those Jones fights, the toughest fight I ever had was (Alexander) Gustafsson. Everyone else I kind of buzzed right through.” 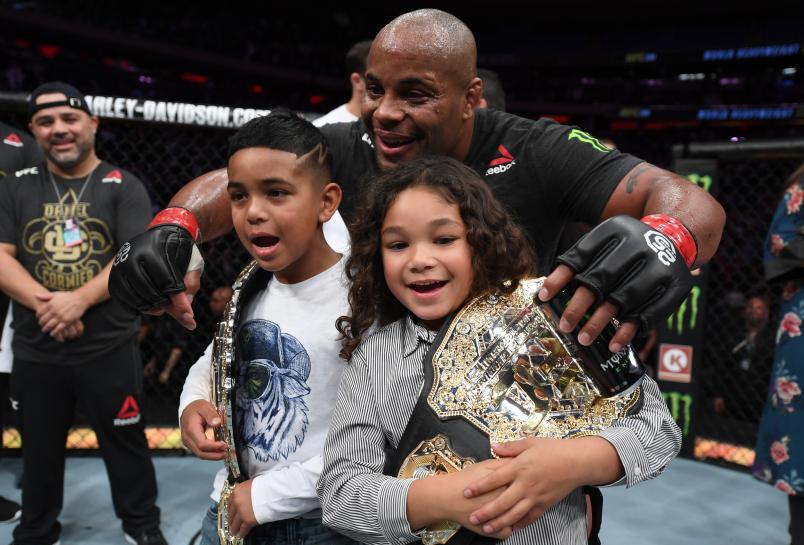 He buzzed through Miocic, shocking the MMA world with a first-round knockout of the longest-reigning heavyweight champion in UFC history. Mission accomplished. Cormier was a double-champ. It would have been the perfect way for the 39-year-old to walk away from the sport.

“You can’t help but think about that as you start to get older, but then you also think, ‘Obviously I haven’t slowed down; I just became heavyweight champion of the world six months ago,’” he laughs. “So it’s finding a balance in terms of when to be done, as opposed to when to keep going. And I think as competitors, you have to really, truly find that right time.”

That time is not now, as Cormier has no intention of closing up shop just yet. And why would he? He closed out 2018 by defending his heavyweight title with a second-round submission of Derrick Lewis, and while he initially wanted to retire by the time his 40th birthday on March 20, the Louisiana native is nursing some injuries that will see him moving past that date. But again, why continue if there’s nothing left to prove?

“There’s nothing left to prove,” he said. “But I’m not a guy that has been fighting just to prove things. I fight because I love to compete. It’s never been that I have to prove that I’m the best. That was never the reason why I fought to begin with. So if the desire is there to compete, then I’ll go and I’ll fight. But if it’s not, then I won’t. If I get ready to start getting into a training camp and I just don’t feel it, I won’t do it. That’s the beauty of being where I am today and being so at ease with my career and with my place and my standing in the history of the sport. If I get into a training camp and I just don’t have this in me no more, I don’t have the desire to train as hard as I want to train, I’ll just stop. I fight because I still love to compete, and I still want to compete, that’s why I’m gonna fight.”

So who’s next for Cormier? The possibilities are intriguing. A rematch with Miocic. A battle with former champion Brock Lesnar. And then there’s Mr. Jones, who took the light heavyweight title Cormier relinquished at UFC 232 in December.

The history between the two has been well documented, with Jones defeating Cormier via decision at UFC 182 in 2015, then stopping him at UFC 214 in 2017. The latter victory was overturned when Jones failed his drug test, igniting the heated rivalry all over again. Yet a funny thing happened when Cormier beat Miocic and Jones regained the 205-pound title, and all of a sudden the ball appears to be in Cormier’s court.

“For what I’ve done, winning the heavyweight title, everything was so tied to him (Jones) initially that me getting the heavyweight title was something so completely separate, especially being that I was undefeated in the weight class prior,” Cormier said. “Going up into a weight that was always thought to be my weight class, winning the UFC title, it helped me. I think for Jones to truly get back everything that he’s lost, it would be good for him and I to fight again. For me, I’ve established my career outside of him. He’s done things outside of me, too, but for him, it would be good if he got to fight me again.”

It is perhaps the greatest rivalry in UFC history, one with new wrinkles seemingly every time it’s brought up. The newest? DC owning the top spot on the pound-for-pound list. And he’s loving it.