Challenges And Cheesecake: Moras Wants To Show Her New Skills In Moncton 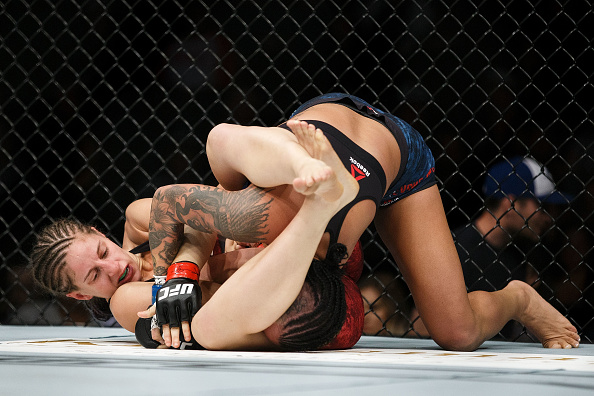 Nicknames are as much a part of combat sports as fighting styles or cornermen. Some can hint at a fighter’s personality, whether it’s “The Notorious” or “Violent Bob Ross.” Others bring an added flow to the mix like Jon “Bones” Jones and “Rowdy” Ronda Rousey. Some even replace actual names such as Cris “Cyborg,” “Rampage” Jackson, and Mirko “Cro Cop.”
A good nickname carves out its own space in people’s minds, and in the case of fighters, that nickname is almost always sounds tough – unless you’re Sarah “Cheesecake” Moras.
Dessert-related nicknames aren’t entirely foreign. There are probably hundreds of “Sugar”-labeled fighters in the world, but rarely does a fully-baked concoction find itself attached to an athlete.
So how on earth did Moras get stuck such a sweet and dairy-heavy label? A dare, of course.
Before her first MMA fight, a friend dared Moras to walk out to the cheesecake song by Muppets character Dr. Teeth. In return, that friend presented her with an entire cheesecake after she won.
“It kind of just stuck,” Moras told UFC.com.

Talkin' Cheesecake! @SarahCheesecake describes the origin of her nickname, and her favorite type of delicious dessert ahead of #UFCMoncton https://t.co/oru6QZ60bp pic.twitter.com/izBYEt8nUx
— UFC (@ufc) October 24, 2018

Now, Moras says she has a cheesecake party after her fights. The rules are pretty simple. If you’re invited, you must bring a cheesecake – B.Y.O.C., if you will.
“There’s like 30 cheesecakes there,” Moras said. “It’s way too much, but it’s awesome.”
As far as what makes a good cheesecake, Moras says the crust is essential, and it can’t be too sweet “you want to be able to eat a lot of it.”
With a memorable nickname in tow, Moras has her sights set on finding her feet in the UFC, where she is 2-2 since making her debut in 2014. Most recently, she was on the wrong end of a unanimous decision at Fight Night Austin in February.

“I’m a well-rounded fighter, and I want to show that.” - @SarahCheesecake on her upcoming fight against Talita Bernardo at #UFCMoncton. pic.twitter.com/ixpqebV97l
— UFC News (@UFCNews) October 22, 2018

Moras takes on Talita Bernardo at Fight Night Moncton, and to prepare, she moved to Las Vegas and is training at Xtreme Couture.
“Almost every class, I’m learning something new,” Moras said. “I’m seeing different things, and I just love my coaching. I love my environment. I love how encouraging everyone is there, so I’m a lot more positive in this camp.”

The bantamweight fighter is also utilizing the UFC Performance Institute and reaping the benefits of the team there.
“Having the PI here has been amazing,” she said. “Having nutritionists … pre-ordering my meals every day so I don’t have to think about what I have to eat. It’s just there for me, so it’s making the weight cut easier. Just everything is easier here, so I’m just loving it.”
Having access to those resources is part of the reason why Moras chose to train in Las Vegas for this fight. She admitted that she doesn’t really have a desire to do much else besides training and resting to train some more.
Although Vegas famously has plenty to do on the weekends, Moras isn’t exactly your typical tourist.
“On the weekends, I find it so boring because there’s not as many classes, so I’m waiting for Monday to come around,” Moras said. “I love Mondays. I love getting back to work, and I’m just learning every day here.”

When she steps into the Octagon on October 26, Moras expects Bernardo to come out strong on the ground, but that’s OK with her as she holds two submission wins in her career. Even though Moras feels like her stand-up game is her biggest advantage, she says she loves the challenge and is “super excited to show her new skills.”
And should she find her hand raised, it’ll make her post-fight cheesecake taste that much sweeter (but not too sweet) before she looks for her next fight.
“I’m an idiot with that. I like the matchups where I think it would be a hard fight rather than an easy fight,” she said. “I’m not looking for an easy fight. I’m looking to fight the best people. That’s why I’m here.”
Zac Pacleb is a writer and producer for UFC.com. You can follow him on Twitter @ZacPacleb.