"This is a fight I have wanted for a long time. In order to be the best, you’ve got to beat the best. This guy is one of the best, and that’s what I’m looking to do." - Brian Stann 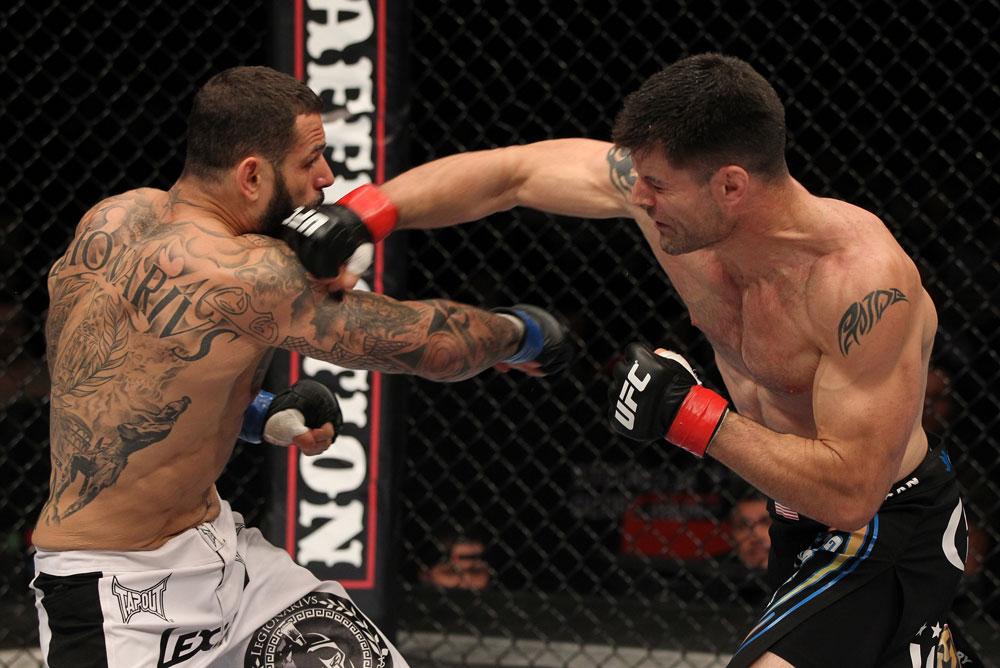 Brian Stann was supposed to be the one to welcome Hector Lombard to the UFC. Fresh off an impressive first-round stoppage win over Alessio Sakara in April, the hard-hitting middleweight was tabbed to be the first to step into the Octagon with the organization’s latest acquisition.

Lombard stood as another “How good is he really?” mystery; a fighter carrying a 25-fight unbeaten streak into this debut on the biggest stage in the sport. With a great deal of intrigue in the pairing and a strong likelihood that it would produce an explosive encounter, the 185-pound competitors were tabbed to headline UFC on FOX 4 at the Staples Center in Los Angeles on August 4.

It was a quality opponent and opportunity for the 31-year-old Stann, but it wasn’t meant to be. A shoulder injury forced him to withdraw from the contest, and Lombard was eventually selected to replace Michael Bisping opposite Tim Boetsch at UFC 149 in Calgary, Alberta. Having lined up their opponents to square off while they recovered, it only made sense for the UFC to have Bisping and Stann meet once they were fully healed and ready to return to action.

“I was very excited; I didn’t expect it,” says Stann of the opportunity to face Bisping this weekend at UFC 152. “I thought I missed out on a major opportunity getting injured. I thought I was going to have to fight somebody who was more of an up-and-comer or a lower ranked opponent, and work towards getting a fight with some real significance.

“I got lucky – I got lucky with the timing, and now I’m fighting a guy who is ranked above me. This is a fight I have wanted for a long time. In order to be the best, you’ve got to beat the best. This guy is one of the best, and that’s what I’m looking to do.”

The last year has brought a great deal of change to how and where Stann prepares for his bouts. After making routine trips to work with Greg Jackson, Mike Winkeljohn and the tremendous collection of fighters assembled in Albuquerque, New Mexico, the 31-year-old Marine made the decision last December to prepare at home in Atlanta instead.

In a sport where egos and opportunities can drive a wedge between teammates, and fracture working relationships, drama didn’t prompt Stann to relocate; tragedy did. After the sudden death of his brother-in-law two days before Christmas, the decision to leave his family to prepare no longer made sense for the 12-4 former WEC light heavyweight champion.

“For me, this is born more out of tragedy and circumstance, and I had to do it. At the same time that this has happened, my kids are also getting older; my kids are in school full-time. Daddy can’t spend six months of the year in a completely different city across the country; that’s just not feasible. There’s a lot of great talent here in Atlanta that used to exit to do their training camps, and we’d train in between fights together – a lot of guys went to ATT, I went to Jackson’s, some guys would go up to New York, other guys would go to California. Now everybody is training together, and we’ve brought together some coaches, and it’s been a pretty incredible environment.

“The shift has gone great. When I’m here in Atlanta, I’ve got an extremely great group of guys – I brought in a great group of guys. There’s a lot of focus, there’s a lot of eyes on every single round I’m putting in. There’s a tremendous focus on drilling and practicing technique every day; it’s an environment that I found where I’m improving in every area faster than I was previously.”

After a stretch where it seemed like all the top fighters in each division were migrating to a small number of “super camps” around the country, Stann believes we’ll see more elite athletes choosing to downsize in the future, opting to receive more focused, individualized training, rather than competing for attention and coaching alongside other title hopefuls and titleholders.

“Fighters, when they get to certain levels, it’s difficult to train for a big fight when you’re in a gym where there are 15 other guys training for a big fight. Sometimes you can get lost in there, and there’s not enough individual attention on what you need to accomplish technically in order to prepare for your fight.

“It’s impossible for someone to decide to train somewhere else unless there is some big drama,” Stann laughs, crediting reality TV with our craving for changes to be born out of scandal, not real life circumstances. “Your life changes as you get older, you get in a different situation – some guys start building around home, some guys still travel to train. I just choose not to (travel) as I get closer to my fight, and focus more here – bring people in to here so I can be with my family more often. It has nothing to do with any drama or anything I wasn’t getting.”

While this will be Stann’s tenth appearance inside the Octagon – and 17th fight overall – there isn’t a great deal of tape for his opponents to dissect. Just three of his previous 16 contests have gone to the scorecards, with all five of his middleweight matches to date ending inside the distance.

What complicates things even more for his opponents is that the majority of his wins all look the same. They showcase the athletic ability that made him a standout linebacker at Navy long before he stepped into the cage, and the punching power that has produced nine stoppages, eight of which have come in the first round. His most recent setbacks look alike as well, all three of his UFC defeats coming as a result of opponents attacking with takedowns, nullifying his power by putting him on his back.

Still developing as a fighter, Stann knows that the relatively short amount of time he’s spent inside the Octagon plays to his advantage, and that the fighter who steps into the cage Saturday night in Toronto will be better than the one who stopped Sakara five months ago in Sweden.

“It’s difficult for people to only evaluate me on tape because they’re not seeing my entire skill set, and so you can still surprise people at times. I’m still getting better every day. For this camp, a gentleman by the name of Raymond Jordan moved in with me; he’s been training with me every day, and he’s an elite level wrestler.

“I’ve been focusing on different areas of my game for a long time now, and improving on them, like heading up to train with Chael (Sonnen), training with different elite level black belts to refine my technique and build on my skill set. Everything I do is deliberate. I don’t just show up to the gym everyday and whatever the coaches feel like teaching I do it – for me, there is always a deliberate plan in place. For these next three weeks, I’m focusing on these techniques because this is where I need to get better. For these weeks, I’m focusing on these techniques. There is always a plan in place for me.”

Heading into this weekend’s meeting with Bisping, Stann’s plan can be summed up in a single word: win.

“Of course you’re always thinking about finishing the fight, but for me, I’m just focused on winning; I’m focused on going out there, fighting hard, and winning. If you go into the Octagon just looking for the knockout, you can sometimes find yourself very far behind on the scorecards, and that’s a mistake someone can make.

“You’ve got to go in there and fight; you’ve got to attack, you’ve got to execute your game, and the knockout will come. It’s like hitting a home run – if you try to hit the home run, you’re going to strike out. Just let it happen – that’s what I do when I strike. I’m very powerful even when I don’t throw my hardest punches.”

While some fighters use their pre-fight interviews to make bold predictions about quick victories or diminish their opponent’s chances, Stann keeps things pretty realistic. Where Bisping has been his talkative, boisterous self in the build-up to Saturday night’s contest, “The All-American” offers a far more level assessment of what fans should expect at the Air Canada Centre this weekend.

“It’s who executes better, and there is always some degree of chance. Either one of us, at any given time, you get clipped and the fight could be over, and that’s one of the beauties of MMA, but whoever executes better is going to win.