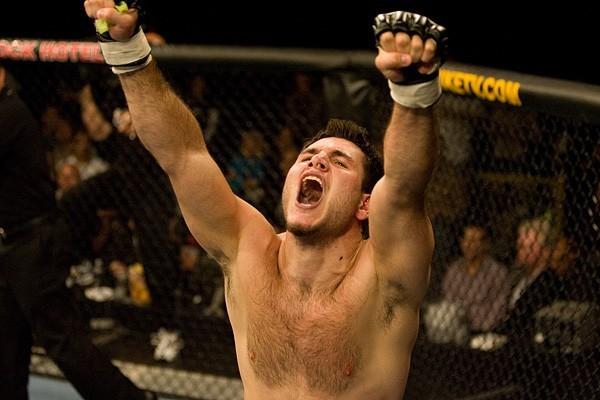 Charles McCarthy only had three UFC fights, but over the course of that time, he submitted Gideon Ray, was a memorable member of the Ultimate Fighter season four cast, made David Loiseau’s highlight reel, and held his own in a trash talking battle with Michael Bisping before the two fought in 2008.

That’s a pretty impressive impact for three fights, but today, McCarthy’s work in the fight game may be even more important as a manager.

“The experience that I bring to the table is that I walked that road that they’re walking, and I’ve been through it with countless guys at the highest levels and I recognize all the good things, and the bad things that can come with it too. And I try to avoid those bad things for those guys.”

The President of Guardian Sports Group, the 35-year-old McCarthy has a unique view on the fight business, one that can only be understood by those who have experienced it from all angles. For “Chainsaw” Charles, that first angle was a fighter.

Owner of a 10-5 record during a career that lasted from 2003 to 2008, the New York native and longtime Florida resident was a skilled groundfighter who began training in 2001. By 2003, he was fighting professionally, building an 8-2 slate that earned him a call from the UFC.

He lost that debut fight to David Loiseau at UFC 53 in June of 2005, and the spinning back kick from the Canadian that spelled the beginning of the end made its way onto UFC highlight reels for a long, long time.

“It’s a weird thing because I’ve been through so many emotions with that fight,” he said. “When it first happened, it was the most awful thing in the whole world for me. I was in a fight I felt like I was winning pretty handily, and all of a sudden it was over and I’m on the receiving end of one of the worst body shots in the history of the sport. I was very embarrassed at first, then it’s on all the highlight reels and getting replayed everywhere. So at first it was a tough pill to swallow. That said, having it be gone (from the UFC’s pre-main card highlight reel) is not the worst thing in the world.”

McCarthy laughs, having put that fight in his rearview mirror permanently. It didn’t hurt that after the Loiseau fight he put together two submission wins and then returned to the UFC through TUF 4, submitting Ray in the first round in November of 2006. By that time, he was sidelined by knee surgery, and beginning to become aware of his limitations in the sport.

“I always felt like I was just visiting when I was fighting,” he admits. “I just recognized it. I trained with Denis Kang every day, and the guy was just a way better athlete than me. There was nothing I was gonna do that didn’t involve him carrying me through to the end of training, like, ‘Come on, Charles, you can do it.’ (Laughs) So for me, it was more like I wanted to leave MMA with all my faculties. I wanted to do everything I knew I was capable of doing, but I didn’t want to hang on too long.”

The middleweight veteran still wanted to go out in style though, so he called up UFC matchmaker Joe Silva and asked for a fight. And not just any fight.

“I wanted a big fight,” McCarthy said. “I wanted all my fights to be big fights. Whoever it was at the very top, that was the fight I wanted. And if you’re not gonna give me that fight, then give me the fight that will get me there.”

He got Michael Bisping. Yet as the UFC 83 bout in Montreal approached, McCarthy was finding out that fans weren’t too happy with the matchup. He decided to change that.

“I thought, ‘How do I get people interested in this fight?’ Playing the good guy isn’t really getting me any attention.”

So McCarthy went on the verbal offensive against one of the best trash talkers in the game. Not surprisingly, Bisping responded in kind, and, “All of a sudden,” McCarthy said, “People were interested in the fight.”

Stopped at the end of the first round, McCarthy called it quits after the fight. And though he was still training fighters, he referred back to his own career and found another passion.

Today, McCarthy works with several athletes, including a host of UFC fighters like Alex White, Rob Font, Alex Milstead, Walt Harris and Charles Rosa. All are talented up and comers, and all have great stories that they’re not shy about telling. Add in Guardian’s Director of Communications, Ed Kapp, who has resurrected the art of pitching stories to the media, and McCarthy has a group that can not only win fights, but make an impact beyond the fight game.

But at the same time, having been a fighter himself, McCarthy has a different compassion for his athletes than others might. So he will have that talk with them if necessary.

“It’s not worth it for me to make money that way to see a guy fight longer than he should,” he said. “You can manage a guy up to that level and pick the right fights, avoid the wrong fights and make a guy look unbeatable based on what he’s able to do in the cage. But once you get to a certain level, everybody’s really good. So once a guy gets to that level, you give him the opportunity to show if he can do it or not.”

And if not, he’ll tell them. It’s probably the toughest part of being a manager. He disagrees.

“Sometimes I think it’s the easiest part,” McCarthy said. “You’re saving the guy. Most guys aren’t going to listen to you in that situation, but at the same time, for my conscience, I couldn’t operate any other way. This is a real serious business.”

It is, but it’s also one made easier if a fighter has a fighter in his corner. And Charles McCarthy is still a fighter.

“I was never meant to be a professional athlete,” he laughs. “We’re all attorneys in my family. If I did things differently when I was coming up, I could have effectively changed a couple fights in my career that were crossroads for me. But at the end of the day, I felt like everything really worked out for me the way it was supposed to. I’m really happy with where I’m at in life right now.”