Chael Sonnen Looks Back On A Moment During The Ultimate Fighter Brazil That Became A Highlight Of The Season
By Walker Van Wey • Jun. 29, 2021

Tucked in a season of The Ultimate Fighter largely slept on by the masses was a moment that the internet dubbed too funny, too intense, too Wanderlei and too Chael to escape.

About five years after TUF Brazil 3 wrapped, winners Warlley Alves and Antonio Carlos Junior were almost forgotten as TUF fighters and more identifiable simply as UFC athletes. The season had few memorable moments until all of a sudden, a Wanderlei Silva meltdown thanks to Chael Sonnen was placed in MMA social media laps seemingly from heaven.

Unseen by most previously, a pre-weigh-in dust up caught fire.

“I kept looking at the cameramen and the director, and I was like open the door and let the guys come in,” Sonnen laughed. “This is getting heated. I wasn’t smart enough to understand that yeah that’s what they wanted. They kind of wanted some of those moments. You got to understand from my perspective this is not the first time he put hands on me, so I was very cautious.”

Slowly but surely pushing the thorn further and further in the side of the already agitated Silva, chirping turned to what appeared to be mocking pleas for tranquility which turned to shoving and finally a full-on brawl.

As it would turn out, the famous phrase blurted by Sonnen just before pushing Silva away, “I can’t let you get close” that now litters Twitter and YouTube comments on an hourly basis wasn’t in jest. Sonnen wasn’t mocking Silva (at that moment); he was instinctively acting on advice he had heard many years ago.

“A lot of people will say let the other guy throw the first punch; my dad did not believe in that at all,” Sonnen explained. “He said the fight begins as soon as they’re within arms’ reach. There’s a confrontation and they get within arms’ reach, they just started the fight. You don’t have to wait for anything.” 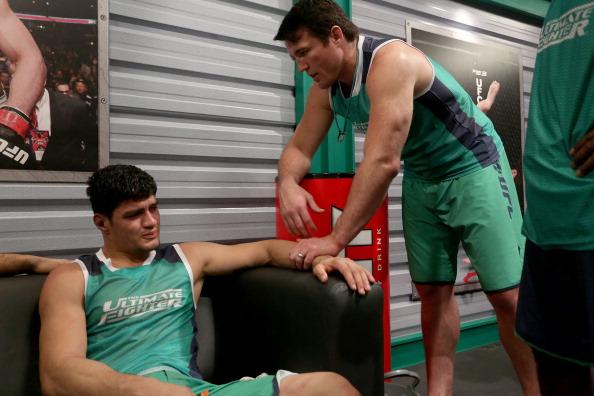 After shoving Silva to make enough space to push forward with as much confidence as somebody could have with an angry Wanderlei in front of them, Sonnen, sporting jeans and flip flops, slipped a punch and shot in for a double leg that would also go on to live in TUF folklore.

“I got to tell you, I got more street cred for winning that fight in flip flops and I never really understood it because I’m used to getting in fights barefoot,” Sonnen said. “Flip flops was a step up from what I’m used to.”

Why the moment appeared and appeared so strongly is anybody’s guess. As strange as it is to imagine a YouTube comment thread without the words “I can’t let you get close,” it was very close to being reality.

“One of the producers told me, ‘You know, I watched what happened and we thought about editing it out just making it go away because it’s such a black eye moment.’” Chael said. “He said, ‘Chael, there’s just something very compelling about two fighters fighting when they’re not supposed to fight.’”

Sonnen is a wholehearted subscriber to the theory that no press is bad press, but had the viral moment not seen the light of day, “The American Gangster” would have had a world of soundbites to fall back on.

Catch the wildest Chael Sonnen moments from WEC, TUF and the UFC NOW, ONLY on UFC FIGHT PASS!