"The problem that I run into is that there are so many guys that need to get beat up." - Chael Sonnen 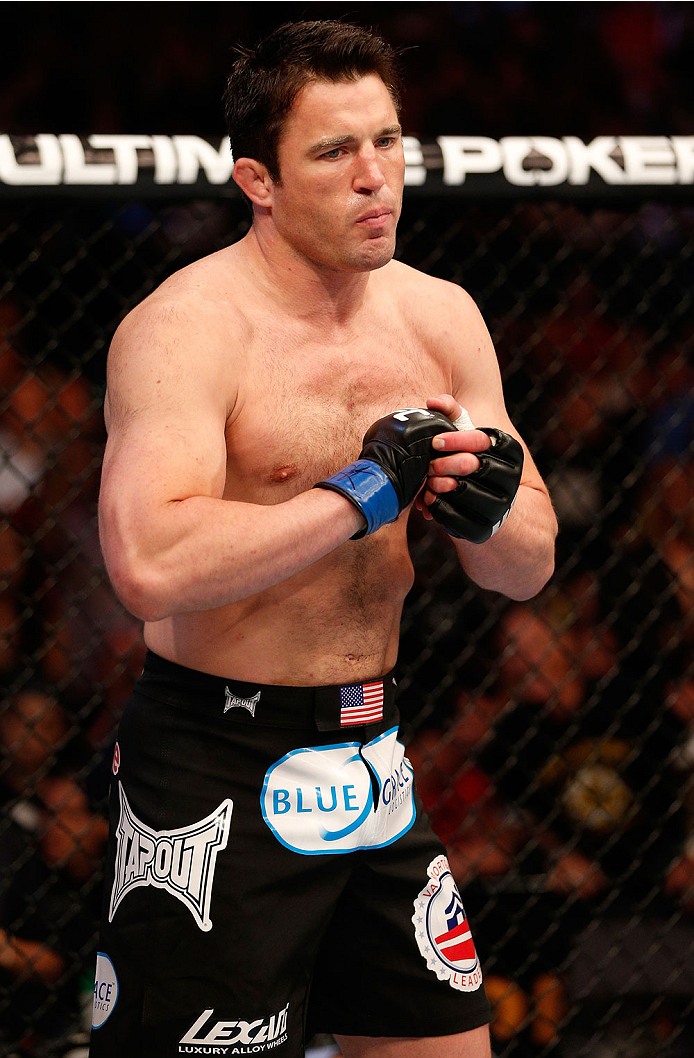 The nails were out, the proverbial coffin open and awaiting its victim. Despite the possibility that he could get a fight with the man he has been calling out for months – Wanderlei Silva – odds are that if Chael Sonnen lost his August bout to Mauricio “Shogun” Rua, his career as a top-flight contender would have been over. And many assumed that was going to be the case in Boston that night.

Yet 4:47 after the opening bell, it was Sonnen walking away with his hand raised after submitting the former light heavyweight champion. It was one of the most impressive victories delivered by the “Gangster from West Linn” and to his detractors, one of his most shocking.

“Our sport is very up and down, and so are opinions,” he said. “I’ve seen guys go in there and get these huge reputations with very light schedules. And I’ve seen some other guys run into some roadblocks with their popularity and their ranking, but they had very hard schedules. This is one of those deals. I don’t sit back and try to plan and manipulate and strategize to protect some kind of a record. That’s much more of a boxing mentality. I come from a competitor’s background and I’ll fight anybody at anytime.”

This has never been in question. For proof, just look at the names: Rua, Jon Jones, Anderson Silva (twice), Michael Bisping, Brian Stann, Nate Marquardt, Yushin Okami, Demian Maia, and so on and so on. Yet the one name he didn’t want to add to that list is the one he’ll be facing in Saturday’s UFC 167 co-main event, Rashad Evans.

“This was a fight that I particularly hoped to avoid, and I don’t like to use words like that,” said Sonnen. “I like to make sure that I keep an open dance card and let somebody else fill it, but here’s the spot that Rashad and I got put in: do we want to fight? No, we weren’t each other’s pick to fight, that’s true. Did we have any kind of a problem or animosity? No. But we’re both veterans of the sport, and there’s a lot of guys that are not only in the UFC, but aspiring to be, that look up to us, and we cannot set a precedent that you pick and choose your opponents or that top guys avoid each other just because they happen to like each other. I would never put myself or my career or my objectives in front of the sport. The sport is bigger than those things. With me, it goes what’s best for the sport, what’s best for the company, and then it goes what’s best for Chael. So it’s best for the company and it’s best for the sport that we do the match, and that’s it.”

And despite their friendship, this is an intriguing matchup simply because what Sonnen does well, so does Evans. Sonnen knows it too, and when you ask him what problems the former light heavyweight champ presents, he’s as blunt as ever in his response.

“I think everything he does is a problem,” said Sonnen. “He’s a little bit short for the weight class and he’s one of the few guys at 205 that’s under six feet tall, so he’s very hard to get in on. He’s very strong and when he takes his shirt off you take one look at him and he’s just a big piece of muscle. He’s a good looking athlete, he’s very quick, he’s very experienced, and he can wrestle every bit as good as I can, and that’s generally my go to skill set. So Rashad’s a big problem all around.”

Yet as Sonnen was always quick to point out, no matter how he feels or what’s going on around him, when they call his name he’ll make that walk, and that’s why the 36-year-old remains one of the most popular fighters in the UFC today. He’s also one of the smartest, so while other fighters approach a bout not knowing what’s next with a win or a loss, Sonnen knows that regardless of Saturday’s outcome, he has a date to coach against the aforementioned Wanderlei Silva on The Ultimate Fighter Brazil 3 and then to fight him. Brilliant. So does this all happen by accident, or has he crafted his career path this well?

“The problem that I run into is that there are so many guys that need to get beat up,” said Sonnen. “There are so many dirtbags in this organization, and they’re particularly the guys that have been here longer. There’s a particular unpleasing mentality I have to deal with on a daily basis with these veterans. And they’re these ungrateful little brats that like to pretend like they carried the heavy water and they moved the needle and they’re the reason why MMA is where it is today and we’re somehow supposed to be appreciative to them. They never comment on the fact of how many other people also struggled, never got a chance to fight in the Octagon, and are never going to live out their dreams. And they also forget to mention the fact that they were paid enormous sums of money and that they did none of it out of the goodness of their heart, they took no risk, and these are the entitled little nuisances that I have to go through one after one and get rid of. I come from a wrestling background where I can dust off ten guys in one day, but in this type of environment I can’t. I’ve got to deal with three of them a year, and it’s just very hard for me to keep my eye on one specific ball when there are so many of them that need a big right hand put in their mouth.”

“It may never be done,” he said. “I do the best that I can to chip away, but they just keep reproducing.”

It’s classic Sonnen, but when you ask him about the upcoming season of TUF Brazil 3, his response may surprise you, as it contains no vitriol whatsoever toward his coaching rival, “The Axe Murderer.”

“TUF is a big commitment and Wanderlei and I will fight, but that’s a separate entity,” he said. “As far as TUF goes, I’m purely there to coach. And if I raise my hand and say I’ll do something, I will do it. And the same goes for coaching; I’m not gonna say I’ll coach and then show up to promote myself or try to market a match with Wanderlei and I. I will show up purely to coach, I will do it to the best of my ability from sun up to sundown until the process is over.”

Sonnen pauses. If it was for dramatic effect, it worked.

“But Wanderlei sucks,” he continues. “Wanderlei has always sucked. He’s one of those guys where you kind of have to scratch your head because he’s likely to end up in the Hall of Fame. Wanderlei has a very significant and meaningful presence in MMA, but the reality is that he’s beyond awful. His record in the UFC right now is five wins and seven losses. It is the worst record in the history of the UFC. When you hear that, you probably go, ‘oh, Chael’s just trying to put him down.’ These are his numbers; this isn’t my opinion. He’s never been in a championship fight, he’s never been in a number one contender’s fight. He’s terrible. He takes easy fights and he still can’t win them. In no universe am I going to try to convince the fans that they should watch me and Wanderlei fight because this is somehow a good fight. It’s not. He’s terrible. I’m challenging him because he’s terrible and because I want an easy fight, and it looks like I finally got one.”

Again, it’s classic Chael Sonnen, and in an MMA world that seemingly changes by the minute, it’s nice to know that what you see is what you get with this fighter out of West Linn, Oregon.

“My goals have never changed,” he said. “I’ve had people come to me and say ‘it must be so great to be the biggest draw in the UFC,’ and I’ve had people come to me and say the opposite, like ‘oh, things must be really hard for you right now.’ I’ve gone through plenty of storms throughout my career too, but I never felt it. I never felt the good or the bad. My day never changes. My dog wakes me up every morning, earlier than I want to get up, I’ve got to take him out, I gotta start coffee, read the paper, wake my wife up, and there’s just stuff I have to do on a daily basis, and it never changes. My life never changes. I’m in the same house now that I was before my UFC career started, I drive the same pickup truck that I had before I was in the UFC, I’m wearing the same sponsor’s t-shirt that I was wearing five years ago. My life hasn’t changed at all. I practice with the same guys, I’m coached by the same coach, and that’s just the way it is and the life that I chose.”