Chael Sonnen - It's Time to Fight

"If he wants to bow and honor and respect and that’s how it was taught to him, then more power to him. But I’m a fighter, and my father told me to win." - Chael Sonnen 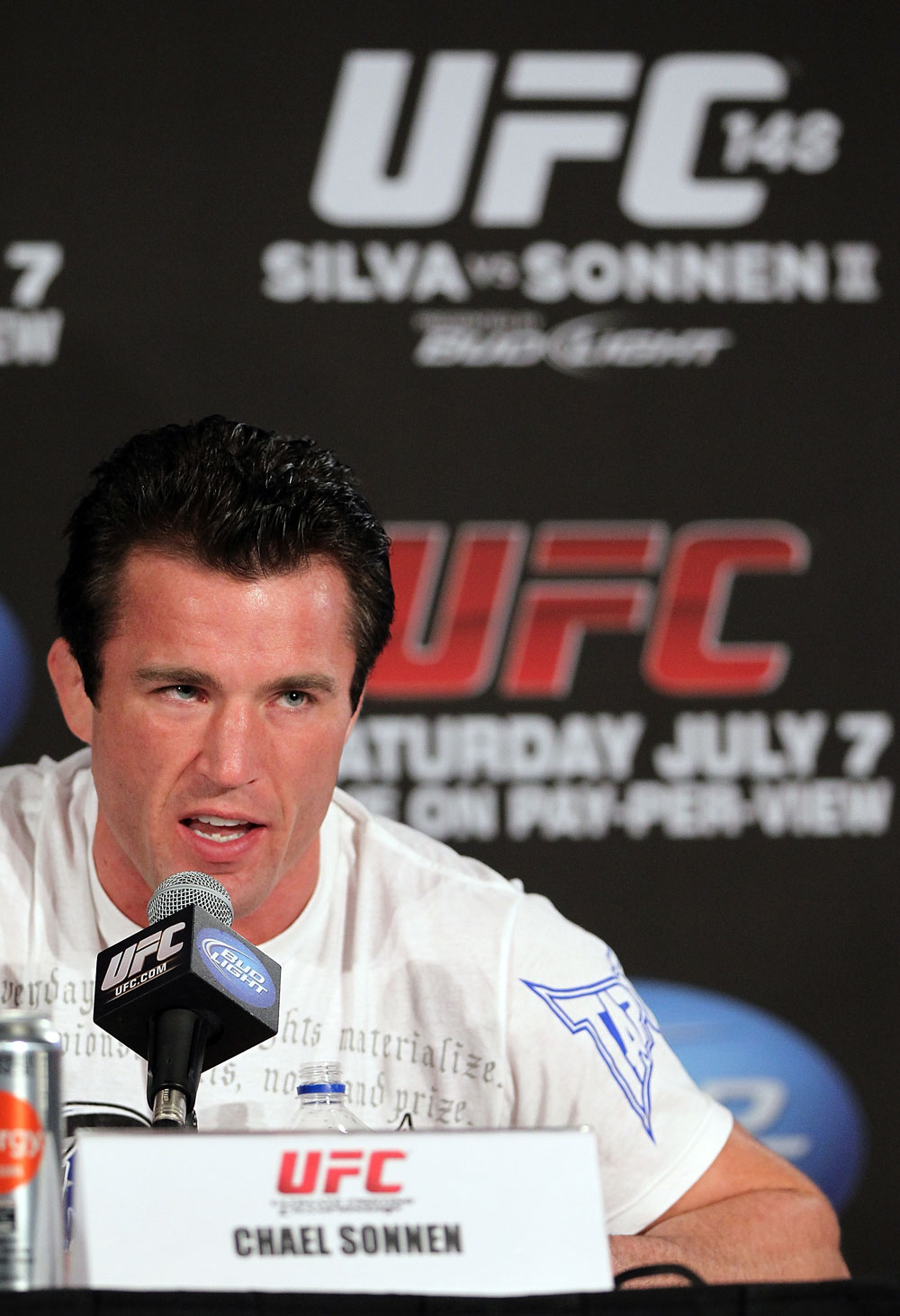 Author, raconteur, salesman, lightning rod for controversy. All are apt titles for Chael Sonnen, the UFC’s number one middleweight contender, and all were probably far from his mind back in 1997, when he was making his pro MMA debut against Ben Hailey, or in 2006, when he lost to Jeremy Horn for the third time, giving him his walking papers from the UFC for nearly three years.

Back then, Sonnen was simply a prizefighter. There’s nothing wrong with that, but when you’re plugging away with the rest of your peers trying to get enough wins to earn a call from the UFC, and then another set of victories to get a title shot, you sometimes need something more, if only for your own sanity as you experience the Groundhog Day existence that can happen in this toughest of sports.

For Sonnen, his honesty and gift of gab was his ticket to the mainstream, a way to separate himself from the pack and make it known that he was not like the rest. Sure, it wouldn’t have gotten him anywhere if he couldn’t fight and compete with the best in the game, but once the rest of the world caught on, nothing would ever be the same.

Now, he’s a day away from one of the most highly-anticipated rematch in mixed martial arts history against 185-pound champion Anderson Silva and he’s the focal point of media coverage from around the globe for his increasingly incendiary statements, and he admits that it feels a lot different leading up to UFC 148 on Saturday then it did when he was first preparing to face Silva at UFC 117 in August of 2010.

“Absolutely, but I couldn’t tell you why,” he said. “And it doesn’t so much have anything to do with the opponent, but things get different with experience, and I’ve had three fights since then, so yeah, it does feel different.”

Not that it’s deterring him from the task at hand, which is, and always has been, to bring a world championship belt back to West Linn, Oregon.

“My job is the same. I say the same things and do the same amount of work. It’s a matter of who picks it up. That has changed. It’s a much larger scale and a lot more attention, not just on our fight, but on the sport as a whole in the past two years.”

That’s the positive part of the whole thing for Sonnen, Silva, and the rest of the fighters in the sport. Years ago, the ESPNs and Yahoos of the world weren’t interested in the sport; today, any sports section worth looking at has UFC and MMA coverage. It’s a development Sonnen admits that he never expected, at least not this soon.

“When (UFC president) Dana (White) used to lay out his vision and make these claims of where the sport would be, I always cheered for him, but I really didn’t think he could get it there, and especially this quickly,” he said. “I didn’t think I would be one of the guys still around when it reached. I thought maybe it would be for my kids or somebody that I was training. So it is a bit of a whirlwind, and it’s great. It’s been a lot of fun, it’s been an awesome ride, but no, we are well ahead as an industry of where I thought we would be five or six years ago.”

At 35, with 40 fights under his belt and 15 years of toil in the bank, Sonnen has truly seen it all in the fight game, and for all the people he’s turned off with the barbs directed at Silva, his teammates, and the country of Brazil for that matter, the real story here is of a fighter getting that rarest of rarities – a second chance.

Nearly two years ago, Sonnen was one minute and 50 seconds away from winning the world championship he has coveted for years. Silva, an all-time great no matter how you slice it, did what all-time greats tend to do in the face of adversity – he found a way to win. It’s a fight Sonnen wouldn’t even look at until he did so recently for FUEL TV’s UFC Ultimate Insider show.

“I was forced to watch it when Jon Anik came out here, and it was painful,” said Sonnen. “It’s so hard for me to watch those things. I fought (Michael) Bisping last, and I’ve tried to watch that fight, and it’s very hard. I really struggle to watch those things and I think it’s a flaw. It’s a weakness of mine. I think it would be better if I did sit down and watch it, or even if I sat and watched it with a coach and hit pause and hit rewind and really studied it. I think I could learn from them. But it’s a weakness and I don’t like to see that stuff.”

Since then, Sonnen has dealt with commission and legal issues, while still finding the focus and time to beat Brian Stann and Bisping in back to back fights. Silva, after delivering a magical comeback against someone who was dominating their fight, was a lot more decisive in his next two bouts, knocking out Vitor Belfort and Sonnen’s training partner Yushin Okami.

“I’ve watched both his fights and I thought he would lose them both, and he won them both dominantly,” said Sonnen. “So in my mind, he’s better than I gave him credit for.”

That’s as far as he will go in terms of complimenting his nemesis, but that’s just Sonnen’s way. When it comes to his day job, it’s a fight, so act accordingly.

“I like to be fair,” he said. “I’m not delusional, he (Silva) is a good little fighter. I am a world-class athlete and there’s a huge difference, and I think Anderson says it best. Anderson said it as an insult, but I took it as a tremendous compliment. He said about himself, ‘I am a martial artist, this guy is a fighter.’ And he’s right. I am not a martial artist; he is. I don’t wear nightgowns and I damn sure don’t bow to people. He can believe in respect and all these other phony things that he says to get himself a paycheck. But at the end of the day, I’m a fist fighter from West Linn, Oregon, and that’s the way it’s gonna be. I’m not bowing to anybody and I’m not after some fake persona like he is or any other of these made up little ‘my father says so and so.’ My father says to win, and if he wants to bow and honor and respect and that’s how it was taught to him, then more power to him. But I’m a fighter, and my father told me to win.”

And whether you agree with Sonnen’s way of pointing out what some would say are little foibles of the fight game, you can’t argue that when it comes down to it, whether you like your opponent or not, and whether you show him respect or not, a fight is still going to take place on the contracted date, and anytime you’re punching someone in the face, there are a lot of different emotions going on there that you may not have had if you were shooting hoops or playing golf.

“I listen to the way guys talk about each other and massage one another back and forth, and it gets really confusing to me if they even understand what we’re out there doing,” said Sonnen. “This isn’t the fight friends, this is the fight business, and I don’t think we should be giving all these apologies. I just don’t get it. I’ve never got it, and I’m not about to. I’m not jumping on board for any of that stuff. I’m not talking about careers and legacies. This stuff’s crap. This is a fist fight, and it’s happening right now.

“I hear the word scared a lot,” he continues. “I hear people say ‘well, so and so is scared.’ And that’s playground talk when you’re a little kid. When you’re a little kid, if two guys have a problem, if one guy can prove the other guy is scared, he then wins. But who cares? People ask me if I’m more confident (for the rematch). I don’t understand the difference if you’re confident or unconfident, if you’re scared, or you’re happy or you’re sad. It doesn’t make a bit of difference. Eventually, they’re gonna shut that door. Eventually, that guy in the shark suit is gonna get out of the way. And eventually you’re gonna be in a fist fight inside of a steel cage. And whether you’re happy, sad, scared, or indifferent, you’re gonna have to fight. So if I were to look at something and it gave me some kind of promise or hope, that doesn’t help me land a left cross; it doesn’t help me to land a right elbow or a front kick. Whether I’m confident or unconfident, my skills are my skills and I’m gonna show them on 7/7 at 7pm, 10 in the east, and only on Pay-Per-View.”

Chael Sonnen - author, raconteur, salesman, lightning rod for controversy. All true titles, all ones that he will probably own up to without hesitation. But he’ll also be the first one to say that it was all for naught if he doesn’t leave Las Vegas on Sunday morning with another title: champion.