"I will punch my way through the system, and if it fails me, then I shouldn’t be there in the first place." - Chael Sonnen 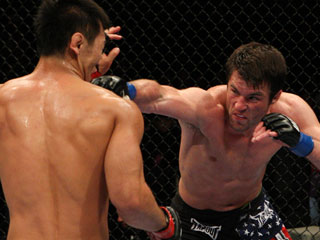 In mixed martial arts, variety is often the spice of life. But not to Chael Sonnen, the middleweight contender who has never strayed from his native Oregon and the gifts that familiarity breeds, even after enduring the struggle to get them.

“It’s one of the bigger challenges of this sport – the monotony,” he said. “The same drive, the same gym, the same smells, the same sounds, the same awful track playing in the CD player, the same voices, the same drills. It’s very monotonous, and it’s very difficult mentally, aside from the physical work. I’m always looking for some way to add a little excitement back to it, or to freshen things up, but I don’t have the answer for that. I’m stuck more in the rat race end of it.”

Surviving that rat race has paid off though, if you consider that Sonnen has won four of his last five UFC bouts, came within 1:50 of winning the middleweight title, and in the process established himself as one of the mixed martial arts’ most compelling stars. So don’t expect him to be switching up from his familiar haunts at Team Quest anytime soon.

“I don’t do well on the road, I don’t do well away from home,” he said. “I’m not ever gonna leave. I was born in West Linn, Oregon, I will die in West Linn, Oregon, and I don’t like to go far. I eat here, sleep here, train here, I don’t like to have to go anywhere, and that’s okay, I’m not complaining about it. There is something to be said for doing the same thing over and over each day with the same people in the same place, and you can’t get around it.”

And while it’s Sonnen’s outlandish quotes that are the ones lighting up Twitter and message boards around the sporting world in the last couple years, when it comes to his craft, Sonnen is at his best, revealing the parts of the game few prizefighters will, simply because it would make them appear to be less than supermen. Sonnen has never subscribed to that notion, readily admitting that when all is said and done, a fist fight with another well-trained athlete isn’t the ideal night out many of his peers make it out to be. But the 34-year old has never shied away from that walk to the Octagon, even when the situation is less than ideal.

“Those are mental skills that I’ve worked on and I’m not gonna share the secret to success because a lot of people do struggle with it, and those athletes can find their own journey,” he said. “But it’s just part of it. The event’s going to take place whether we want to do it or not, whether we feel good or not, whether we’re happy or sad – the event is going to happen. So the question is, how are you going to deal with it when it does?”

Since his return to the UFC in 2009, Sonnen has dealt with his second lease on life in the Octagon with wins and brutal honesty, a deadly combination that is also a highly marketable one. But while it’s the soundbites that have made him a star, it’s his fights that have made him arguably the best 185-pound fighter in the world not named Anderson Silva. And should he defeat Michael Bisping this Saturday night in the UFC on FOX co-main event in Chicago, he will get another shot at the champion later this year. Yet Sonnen isn’t concerned with the shot, per se.

“I’m not after a title shot, and this is the big thing that separates me from everyone else,” he explains. “I’ve never asked for a title shot and it’s not about a title shot – it’s about the title. And for so many guys, they want that title shot and they sit and they argue and they go to the media and they politick for these opportunities, and I’ll fight my way through. And if somebody can beat me, then I don’t deserve it; if somebody can beat me, then they should go have it. I don’t need politics or the media or anything else to propel me. If my skills and my ability won’t do it, then I don’t want it. It’s not about the shot and these fake opportunities because you politicked your way through the system. I will punch my way through the system, and if it fails me, then I shouldn’t be there in the first place.”

So evening the score with Silva isn’t an issue?

“That rematch is never gonna happen,” said Sonnen. “Don’t get caught up in that. Anderson and I will never cross paths again.”

And Sonnen is okay with that?

But even if he won the title, would never getting another shot at Silva eat at him?

“I imagine it will, but such is life. You pack up and you move on.”

You guessed it, the Gangster from West Linn is just getting warmed up.

Needless to say, Sonnen’s venom for “The Spider” is still strong, and maybe he’s just laying the promotional groundwork for a rematch that would likely shatter attendance and Pay-Per-View records. But first there’s the business of Bisping, the Brit who isn’t about to let his own opportunity for a shot at Silva fade away without a fight. And Sonnen knows this, so he’s taken his foot off the smack talk pedal a bit leading up to this one, instead showing a grudging respect for the skills of “The Count.”

“These guys are all so tough,” said Sonnen. “They really are. I look at Bisping’s skills and I don’t know that it’s tickling me with a feather, but I look at Bisping’s record, and I go ‘damn, the one thing that guy knows how to do is win.’ And Bisping’s been in a lot of big fights, he’s headlined shows, sold out arenas, and he’s a winner. First and foremost, he wins matches, so it’s not like they dealt to me from the bottom of the deck here – this guy’s a good fighter, his name’s been in title contention, and I’m a supporter for the most part. A lot of people don’t think Bisping’s ready for title shots and big fights, and I’m sitting on my couch going, well, he’s beating everybody they’re putting in front of him. I don’t think we can badmouth him with a straight face for too much longer.”

Whether Bisping is a tougher fight for Sonnen than the man he replaced - the injured Mark Munoz - remains to be seen, but the veteran from Oregon is well aware that whether they talk smack or play nice, when Saturday night comes, they have to fight.