"The Sacramento crowd is one of the best crowds I’ve ever fought in front of – they get behind us, get rowdy, and it pumps me up so much." - Chad Mendes 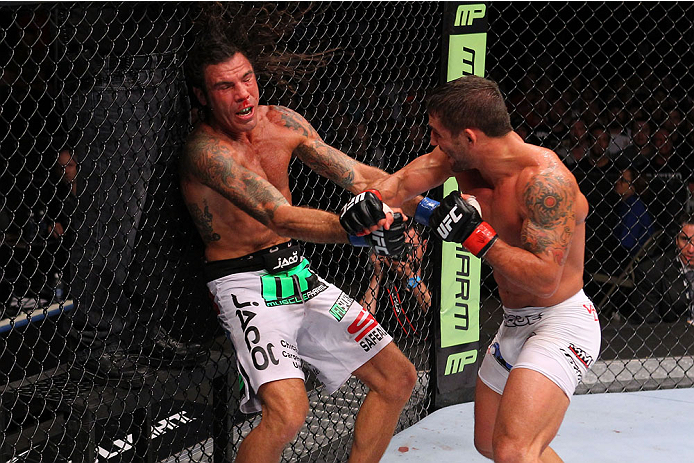 “Fighter” – that’s what Chad Mendes writes in the little box on his tax return forms, and any other government document that inquires about one’s occupation.

Stripped down to its essence, the 28-year-old Hanford, California native makes his living trading punches and kicks with similarly sized, like-minded individuals every three to six months.

Over his last four fights, the Team Alpha Male representative has collected four wins, each one ended inside the distance.

When he began his climb up the featherweight ranks, critics would have listed Mendes’ occupation as “just a wrestler,” as the former NCAA Division I National finalist used his pedigree on the mat and ample athleticism to control opponents on the canvas while accruing decision wins in five of his first six WEC and UFC fights combined. > Watch: Team Alpha Male's Secret Weapon

Over the last two years, however, he has become the greatest example of the impact head coach and striking guru Duane “Bang” Ludwig has had on the Sacramento-based team of fighters. Cody McKenzie, Yaotzin Meza, and Darren Elkins were all felled in the opening round – thunderous punches launched by the increasingly confident contender spelling their demise early.

Last time out, Mendes proved beyond a shadow of a doubt that he could – if he was so inclined – 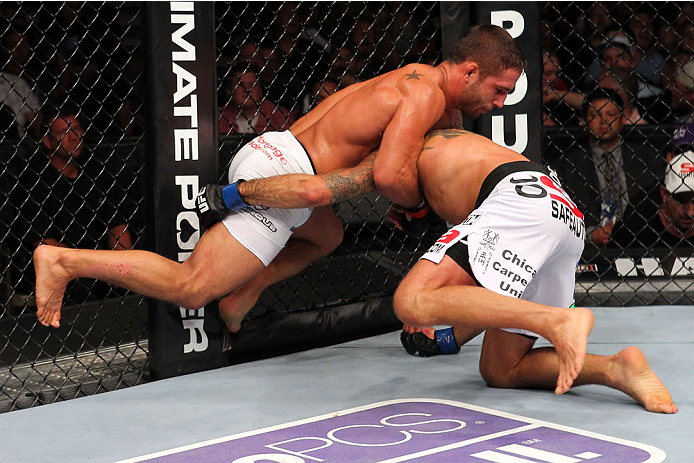 go a little more detailed and list his occupation as “Complete Fighter,” as he ran his winning streak to four by becoming the first man to finish durable veteran Clay Guida with strikes.

“It’s tough because Clay’s my buddy, so it was hard to just turn that off,” admits Mendes, whose record now stands at an impressive 15-1 as a result of his current run of success. “We’re friends and we like to hang out, so it was tough to turn that off and tell myself, `You’ve got to beat this guy up.’

“The goal was to go out there and finish the fight – not just because it was Clay Guida, but because I want to keep racking up those knockouts and those finishes. One thing I was really training for in that fight was the cardio part of it – Clay is known for that, and I focused a lot on that – and in that third round, I still felt great, and I was able to just pinpoint the chin, put one on it, and I was able to put him away.”

While there are numerous basic or detailed ways Mendes could explain his occupation on those government forms or in conversation, he is a fighter. What he is not is a matchmaker.

Just like everyone else on the UFC roster, the surging former title challenger has his own thoughts about which fighter he should be sharing the cage with next. And just like his colleagues, the name at the top of Mendes’ list rarely ends up being the one listed on his next bout agreement.

“As much as I would like it to be, who I fight is not up to me, it’s up to the UFC, so I basically just have to do what I can control – get in there, and keep destroying these guys they put in front of me.” 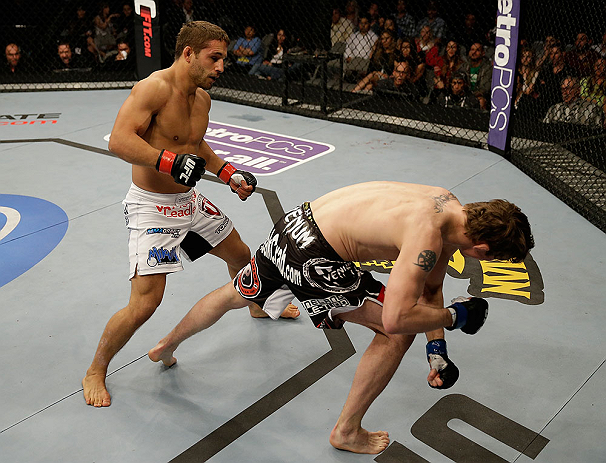 Having racked up four straight wins, Mendes had his sights set on a rematch with featherweight champion Jose Aldo, the lone man to beat him at this stage of his career. While the contest happened nearly two years ago, the bitter taste of defeat still lingers, especially given that Mendes appeared to be in control of the bout right up until the moment the Brazilian titleholder ended things with a perfectly placed knee.

Instead of Aldo, Mendes will next share the cage with Nik Lentz, the former lightweight grinder who has earned a trio of victories since making the move down the scale to compete at featherweight. Though not the opponent he had in mind, the truth is that Mendes would have agreed to fight anyone (save for his teammates, of course) to be a part of this weekend’s UFC on FOX fight card in Sacramento.

“Eventually they’re going to have to give me another shot,” he says confidently. “I really believe everything happens for a reason. Nik Lentz was the person they put in front of me, and I’m just thankful that I get to fight on this Sacramento card – I wanted to be a part of this with the team and with the guys. I control what I can, like my training, trying to stay healthy, and doing all the positive things I can, and now I just have to get in there and do what I do best.” > Watch: Chad Mendes' UFC Breakthrough

While some fighters find competing at home difficult – or wrought with different distractions than a bout in a neutral location – Mendes falls on the opposite end of the spectrum.

Sleeping at home? Competing in front of friends and family? Sign him up.

“Hell no! I don’t see it as a distraction at all. It’s so awesome,” Mendes offers, his excitement about fighting at home abundantly clear. “I got to fight in Sacramento one other time – the only pay-per-view WEC ever did. I took the fight on short notice, so everything was very quick about it, but I remember how convenient everything was. You get to stay comfortable. You’re sleeping in your own bed, you’re not flying anywhere, worried about the time change – I know where all the food is and where I can get it. It makes things so much easier.” > Watch: Mendes submits Anthony Morrison

Not only is this a chance to wake up at home before stepping into the Octagon, but it’s also a chance to prepare alongside three of his teammates – Danny Castillo, Urijah Faber, and Joseph 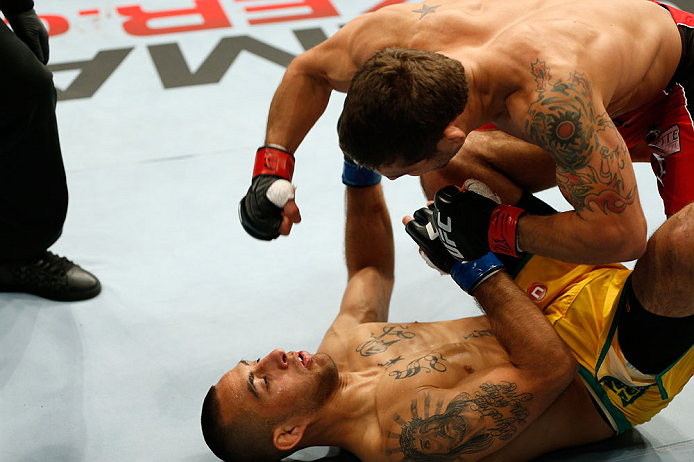 Benavidez, who faces off with Demetrious Johnson in a flyweight championship rematch in Saturday’s main event.

“We’ve talked about it, and this is definitely something that’s very special to us,” Mendes admits. “It’s always awesome being on the same card as your teammates – we’ve done three before where we’ve had a clean sweep, and that’s awesome – but because this one is in Sacramento, this is going to be huge for us.

“The Sacramento crowd is one of the best crowds I’ve ever fought in front of – they get behind us, get rowdy, and it pumps me up so much. I’m super-pumped to get in there, fight for the Sactown crowd, and put on a great show.”

For Mendes, that means continuing the impressive run he’s been on since losing to Aldo – adding another victory to his resume, and hopefully getting one step closer to once again fighting for the UFC featherweight title. > Watch: Google Hangout with Team Alpha Male

“He’s a tough guy, a hard-nosed guy,” he says of Lentz. “He wrestled in college at Minnesota – which is a tough wrestling community – and you can see in his fights that he’s a big guy, cutting down from 155 (pounds). He looks pretty strong – when he gets in there and gets a hold of these guys, he kind of stops them for a second – so I’m expecting him to be a big, strong guy, but he seems slow, he’s not very explosive, and he’s not very dangerous either. 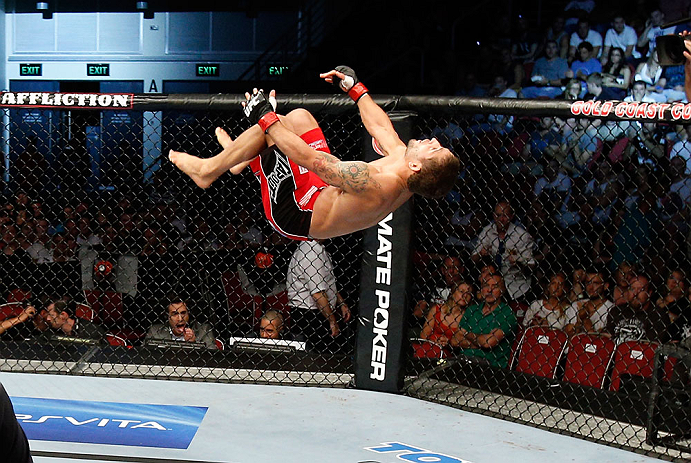 “Basically, the way he wins these fights is just grinding these guys out and wearing them down, out-grappling them. It matches up great for me. I have the higher wrestling pedigree; I’m more explosive, and more of an athlete all around. I just have to go out there and be smart – I know he’s going to be looking to take me down, and hopefully I can land a heavy one on his chin.

“One thing I’ve noticed watching his fights is that he can take a heavy punch – I’ve seen him get hit three or four times in a row with big, heavy punches, and he’s able to come back,” Mendes adds.

“Of course, Guida was able to do that too though, so it’s definitely a possibility. I think that I can knock this guy out.”

After all, that’s what fighters do.