"I know I hit very hard, and if I can get a hold of him, I think I can be the first guy to knock him out." - Chad Mendes 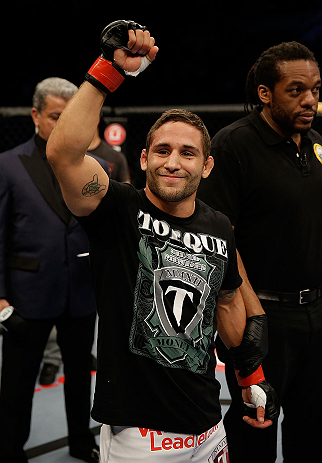 Walking through the bowels of Seattle’s Key Arena back in late July, Team Alpha Male flyweight standout Joseph Benavidez was singing the praises of his teammates.

In town to watch Danny Castillo take on Tim Means and to serve as the featured fighter for another UFC Q&A session prior to Friday’s weigh ins, the conversation made its way to featherweight contender Chad Mendes. The former title challenger was back in Sacramento, preparing to do battle with Clay Guida a month later, in a fight that was originally set to take place this past April on FOX.

The April show turned into a Team Alpha Male showcase, as Mendes, Benavidez, and bantamweight prospect T.J. Dillashaw all collected stoppage victories. With his win over Darren Elkins, Mendes extended his winning streak to three, and continued to show the developing power and striking acumen that produced first round knockout wins in his previous two appearances as well.

“Chad is just,” Benavidez started, shaking his head, searching for the right word to describe his friend and teammate. “He’s the most athletic of all of us, and things just come so naturally to him. Now that he’s getting comfortable…”

His voice trailed off, the look on his face conveyed the message more effectively than words ever could.

Everyone in the featherweight division better watch out.

The idea that Mendes is just now getting comfortable in the cage even though he’s already fought for the UFC featherweight title, and competed against some of the best in the world inside the little blue cage of the WEC and now in the Octagon might seem strange to some. After all, the 28-year-old two-time All-American wrestler raced out to a perfect 11-0 start to his career, with his only loss to date coming against featherweight champ Jose Aldo.

But it has been clear since his fight with Aldo that Mendes is a different fighter, even if the surging contender has only given observers 214 seconds of action over his last three fights to build that 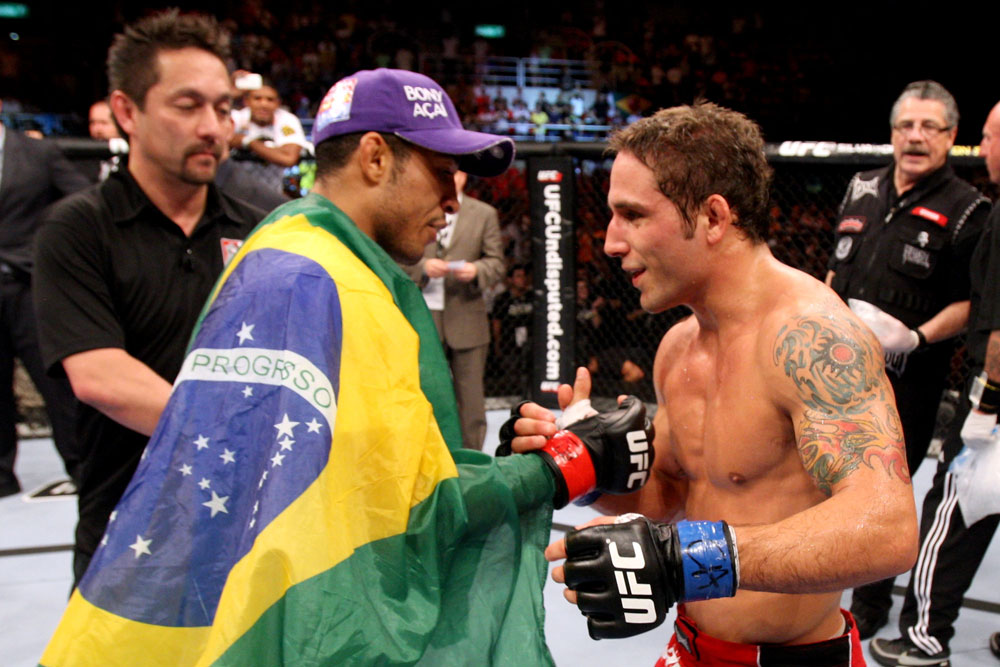 “Being comfortable is huge in this sport,” explains Mendes, days before sharing the cage with Guida at UFC 164 in Milwaukee. “Guys that are completely fearless, they’re the guys that are most aggressive in fights. The guys that can be calm and collected, but aggressive at the same time because they’re fearless, those are the most dangerous guys in the sport. I think I’m finally starting to find that, and it feels great.

“The last few fights, I think I’ve just kind of been finding myself, and growing into myself as a complete mixed martial artist. I’ve always had the wrestling, and coming into the gym, the guys always told me I have the power and I have the speed. Technically, I felt like I could do things like hitting mitts and sparring and stuff, but it’s completely different doing that in the gym with 16-ounce gloves on versus going in there full bore with little MMA gloves on.

“I wasn’t very confident or comfortable with my hands, so I never really let them go. I think the last few fights I’ve just kind of found that. I’m starting to feel really comfortable, and I think that has been showing. It’s just all starting to fall into place for me.”

Things have been “falling into place” for Team Alpha Male as a whole since former UFC competitor Duane “Bang” Ludwig became the group’s head coach.

Like his teammates, Mendes raves about what the man with the fastest knockout in UFC history brings to the table as both a coach and mentor, and how instilling Ludwig as the leader of the talented band of lighter weight fighters has been the missing piece of the puzzle.

“Having Duane here has been huge for us,” says Mendes, echoing sentiments previously shared by Castillo, Benavidez, Dillashaw, and team founder Urijah Faber. “We’ve never had a head coach figure, and his system is unbelievable; it’s like nothing I’ve ever seen before.

“He’s a genius when it comes to techniques, and he’s obsessed with video. He’ll sit down and watch film, and he’s always thinking of new combinations, writing it down. To have a coach that is so obsessed and so passionate about seeing us perform and do well, it means a lot to me, and it makes me want to succeed and make him proud.”

The same goes for seeing his teammates continually getting their hands raised in victory.

“We’re all brothers. If someone goes out there and performs like we know that they can, like they do in the room every day, it’s great for us to see it happen, and I know for me, it’s just like seeing one of my brothers succeed at something.

“It means a lot to me to see one of my teammates – I see the hard work that they put in every single day, so to go out there and kick someone’s butt, and perform well, it’s awesome. Faber just went, now it’s my turn, and then Joe, and then T.J.”

Heading into Saturday’s main card encounter with Guida, Mendes isn’t exactly sure what to expect from the experienced veteran once the cage door closes. Once known for his in-your-face style of fighting, Guida’s last two appearances have landed at the complete opposite end of the spectrum.

In his final lightweight bout, “The Carpenter” employed a stick-and-move approach against Gray Maynard that featured too much “move” and not enough “stick” for the fans, the judges, or Maynard’s liking. In his featherweight debut, the man who gets slapped in the face several times by his brother Jason before stepping into the cage took a cautious approach against Japanese veteran Hatsu Hioki, content to use his wrestling to grind out a decision win from the top position.

It makes setting up a game plan and trying to anticipate what is going to happen this weekend even more difficult.

“Going into a fight like this, I have to expect to have a war,” says Mendes, who holds victories over current featherweight contenders Steven Siler, Erik Koch, and Cub Swanson. “I do with every fight, but I think really with this one, I have to expect it.

“Clay wins by frustrating people. He has incredible cardio and never stops moving around the entire fight, and that can be tough for guys that aren’t fast, that don’t have great footwork. With a guy like Clay, you can’t just go in there expecting to throw one big punch and knock him out; he can take those big punches or big kicks and recover quick.

“I’m definitely expecting a war with this guy, but you kind of don’t know which Clay is going to show up. I feel like the Clay that has been around recently is more of a point fighter – not really looking to finish, more just winning the fight. I remember the “Old Clay” that was in your face, throwing blows, never stops moving, and is all over the place – that’s the Guida that everybody loved, and I’m hoping that’s the Guida that shows up because that would be an awesome fight.”

Though he’s prepared for a battle of attrition, Mendes would much rather keep doing what he’s been doing of late: get in, get the win, and get out, all in less than two minutes time.

“It sucks going a full fight – it’s hard!” he laughs. “If it were up to me, I’d go out there and finish a guy in the first 30 seconds every time, but at this level, the competition is so high that it’s not always going to happen. > Watch: Chad Mendes' UFC Breakout

“There are so many tough guys in this weight class and so many guys that have names or that have either fought for the title at ’55 that are coming down, wanting to make ’45 their home, so the competition is not getting any easier.

“I just have to keep going out there trying to finish guys, knocking them out as quick as I can or putting on completely dominant performances. That’s what’s going to separate me from the rest of these guys.

“I’m expecting a war with this guy, but ultimately, I want to continue what I’ve been doing my last few fights, and that’s finishing it. I know I hit very hard, and if I can get a hold of him, I think I can be the first guy to knock him out. We’ll see Saturday night.”