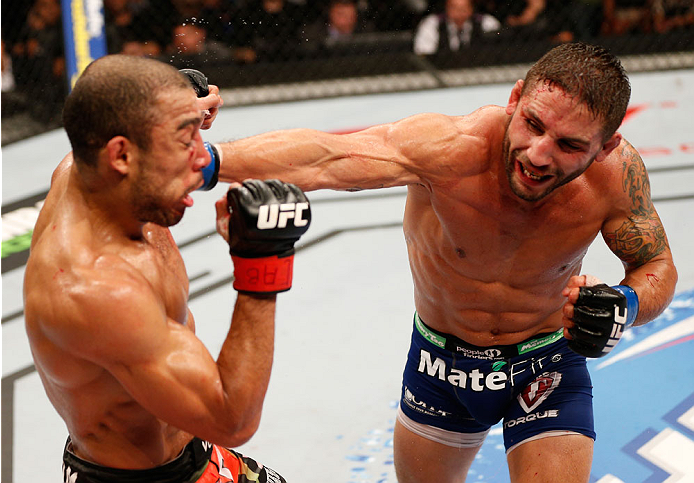 Chad Mendes’ life has been one of competition.

From an early age, the Northern California native forged his will to win on wrestling mats up and down “The Golden State,” honing the skills that would later bring him to a career in mixed martial arts. And while Mendes’ career as an amateur wrestler came with both success and setbacks, it also instilled a certain tenacity to get back into the fray when results didn’t fall his way.

There may be a sense of rinse, wash, repeat in a life spent testing your will against that of another, but there is gold to be mined from that particular grind and Mendes has benefited from that investment. Whether it’s a state tournament in his youth where he had to battle back for a string of consecutive victories just to earn second place or it’s a hard-fought loss in his rematch with Jose Aldo at UFC 179 last October - Mendes knows how to get back after it.

And that is what his upcoming bout with Ricardo Lamas is all about.

“This is the exact same mentality for me,” Mendes said about his competitive spirit. “I am going to get right back in there and get back to another title shot. I’m facing a tough guy in Lamas, and a win in this fight has the potential to put me right back in that number one spot. That’s where I want to be and I’m determined to get there again.”

Both Mendes and Lamas are recent title challengers and are widely regarded as two of the best featherweights in the world. They are set to collide in the main event when the UFC returns to Fairfax, Virginia on April 4, in a bout that could very well launch the winner back into title contention. The Team Alpha Male representative is determined to get back to a championship opportunity and he knows that will all depend on his ability to turn back “The Bully” at Fight Night: Mendes vs. Lamas on Saturday night.
> Watch Face-off: Mendes/Lamas

That said, “Money” also understands derailing Lamas isn’t a task to be taken lightly. The Chicago transplant has become a major player in the featherweight fold since dropping down from the 155-pound ranks in 2011, winning all but one of his seven showings at 145. Since his lone featherweight setback to Aldo at UFC 169 in February of last year, the perennial contender has rebounded strong and collected back-to-back victories over tough competition.
With the featherweight division continuing to heat up, it’s all but guaranteed that the best of the 145-pound collective will meet up. Mendes and Lamas will get their moment on the sport’s biggest stage, and the Sacramento-based fighter has every intention of emerging victorious in Fairfax. 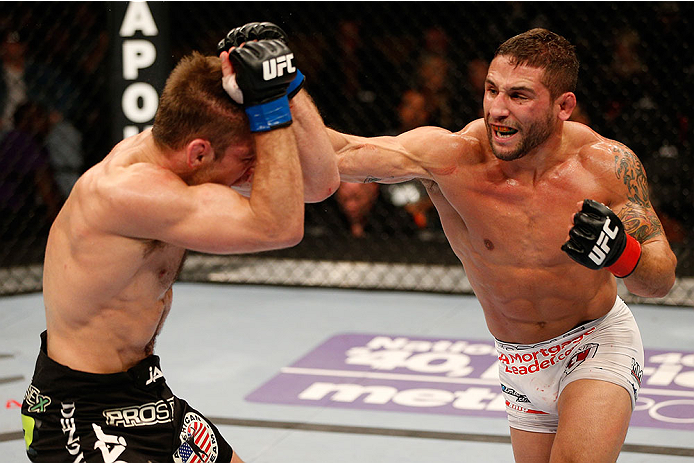 “I’m treating this fight like a title fight because it’s huge for me,” Mendes said. “I came up short in my last fight and I’m hungry to get back to the top. This fight has all the potential to get me there. Lamas comes to fight, just like I do, and we are both top-ranked guys who are sitting close to another title opportunity. This fight means everything to me and I’ve put in all the hard work to prepare for it. I’m ready to go.

“This is a fight I knew would happen eventually. We were both in the WEC and I knew if he decided to drop down to 145 we would cross paths. I’m very familiar with the way he fights and I’m ready to step into that Octagon with him. We are both guys who have strong wrestling and our striking continues to improve with each fight. I showed a lot of progress in my last fight, and he dropped a tough fighter with a jab and then choked him out in his last fight. This has all the makings to be a very exciting fight and could very well be Fight of the Night.”

With Mendes and Lamas set to handle their business on Saturday night, it will be the first bout in a string of high-profile tilts in the featherweight fold. Mendes’ teammate and former WEC featherweight champion Urijah Faber will return to 145 to face resurgent former lightweight champion Frankie Edgar when the UFC debuts in Manila in May and long-standing Brazilian title holder Jose Aldo will look to extinguish the Irish upstart Conor McGregor at UFC 189 on July 11.
Those circumstances set the stage for a torrid run of action in the division, and Mendes plans to maintain his status as a major threat to the 145-pound crown. With that in mind, taking a loss to Lamas simply isn’t an option, and on April 4, Mendes is confident he will put himself right back into the championship mix. 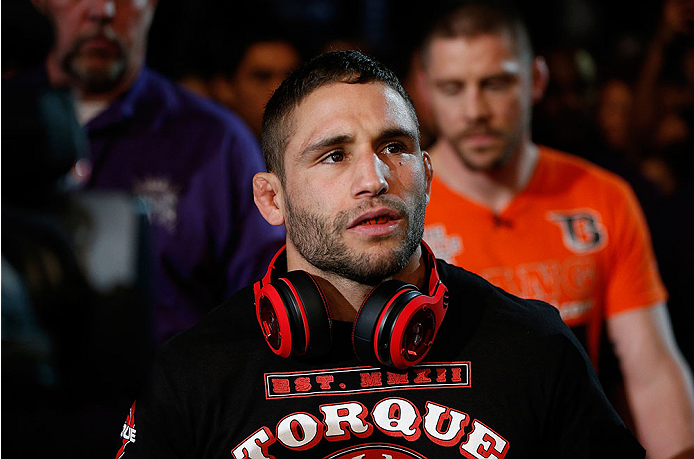 “The featherweight division is full of talent and this fight is going to showcase two of the best guys at 145,” Mendes said. “There are a lot of tough fighters in this division, and with more and more guys dropping down from 155, it’s only going to get more competitive. There are no easy fights at 145 and you have to continue to improve to stay at the top of the division. I’m in the gym improving my skills and working hard every day.

“I’ve trained very hard for this fight,” he added. “I’m feeling good and everything is coming together. My timing, speed, power and strength are all right on point. At this point, it’s about keeping all that intact as you go from breaking your body down in camp to making weight. All in all, I’m feeling great and can’t wait to get in there.”
> Check out the full UFC Fight Night: Mendes vs. Lamas fight card