"Ever since the first day that I started training, I always wanted to be a fighter." - Chad Laprise 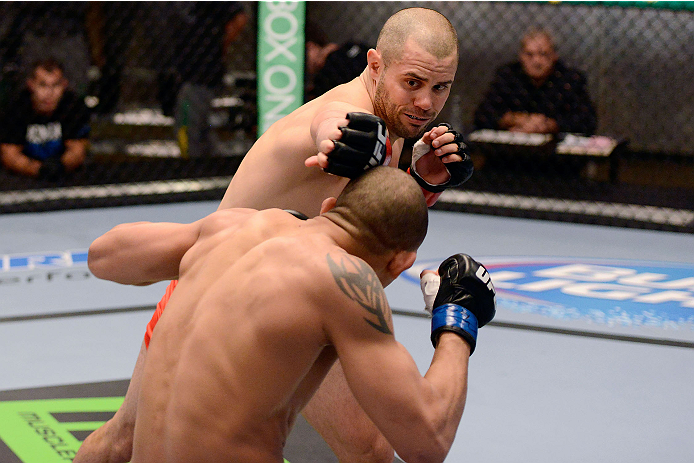 Sometimes it’s the little things that make the difference between winning and losing on The Ultimate Fighter. One of those little things for Chad Laprise was finding out that once he entered the house for the TUF Nations competition, it was going to be about the competition, not he and castmates becoming reality television stars.

“I’m so thankful that we didn’t have any crazy dudes, any Junie Brownings or guys like that in the house,” said Team Canada’s Laprise, referring to the season eight wildman. “Everybody was really nice, really respectful, and it made things a whole lot easier. Being there is tough enough as it is, and I couldn’t imagine dealing with some clowns as well. It would be much harder.”

That was a little thing. A big thing was the right hand that broke the jaw of his teammate Kajan Johnson in their semifinal fight and sent him into Quebec City for the season’s welterweight final against another teammate, Olivier Aubin-Mercier, on Wednesday. And while dealing with the result of the Johnson fight was tough for the 27-year-old, he expects fighting Aubin-Mercier to be a slightly easier event.

“It was definitely much harder fighting a teammate on the show because we were living together every single day and training together,” said Laprise. “Even before the fight I would see him (Johnson) every day, and after the fight I had to see him with his jaw broken and his face messed up. That was super hard. And don’t get me wrong, fighting a teammate now is hard as well, but I didn’t spend any time in Montreal for this training camp so I haven’t seen Olivier since we left the show, and it’s a little easier this time around. It’s not an ideal situation, but it’s what has to be done.”

Just like spending six weeks away from home for TUF Nations was what Laprise had to do to take his career to the next level. 7-0 entering the competition, the Ontario native obviously could fight, but what separates those on the show is how they deal with the stress of the house and of being away from the outside world for a month and a half.

“I’m definitely very grateful and very fortunate for the opportunity that I had to compete on TUF, but it was definitely one of the hardest things that I ever did,” he said. “Six weeks from my wife and my family, no contact with anybody, and I had to fight a teammate on the show – it was definitely mentally challenging.”

It’s often the forgotten part of the TUF experience, how family members deal with such an absence. Laprise’s bride was used to him being away for training camps, but at least then they can talk, email, Skype, and keep in contact. This time, no dice.

“She was kind of on her own when I was gone, and I was hoping and praying that nothing went wrong while I was there and things came out for the good,” said Laprise. “But she had no idea what was going on, when I was fighting, if I was hurt, so I would say it was harder on her than even on me, but I’m thankful that she puts up with it, and I definitely have a great wife. She knows that this is my career, and she supports me all the way.”

And after an eight week camp before TUF and the six weeks on the show, the Laprises definitely earned a nice vacation when he returned.

“When I came home, it was right around Christmas time and we went to Florida for a week,” he said. “I took a week off and didn’t think about fighting or anything and just spent time with my family. But once we got back, it was right back to work for me.”

Part of that work for all the fighters on the show is getting ready for life in the UFC, which amps things up considerably when it comes to pressure and nerves. That’s one area Laprise believes he has covered though, having worked extensively with UFC vets Sam Stout and Mark Hominick over the years.

“I’m actually very fortunate that I’ve cornered my teammates Mark Hominick and Sam Stout four times in the UFC,” he said, “So four times I’ve been in the back and made that walk out to the cage, and that definitely gives me an advantage over guys who have never been there before. Once you get to the UFC, it’s a whole different ballgame. There’s so much more pressure, there’s a whole lot more stress back there, and I feel very comfortable with that. I’ve been there, so there will definitely be no surprises, and I’m just ready to perform and I’m grateful for this opportunity.”

It’s been a long time coming, over ten years to be exact. And Laprise is not about to let the moment pass him by.

“It’s been quite a long journey here and I’m just super excited to get my UFC debut,” he said. “Ever since the first day that I started training, I always wanted to be a fighter. I truly believe that God put me on this Earth to be a fighter, and now I’m finally in the Super Bowl of mixed martial arts, and I’ll be making my official UFC debut.”