"At the moment, I have a single focus, and that is Sarafian. I will go all out to win this fight and then we'll think about the next
step." - Cezar Ferreira 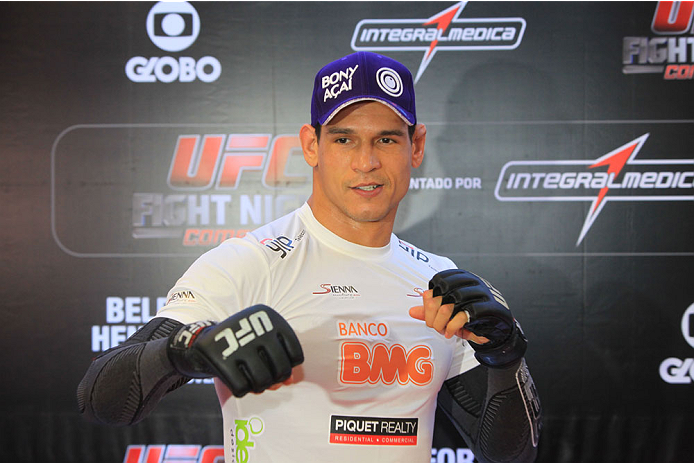 “Yes, I knew we would fight one day,” said Cezar “Mutante” Ferreira about his UFC Fight Night bout with Daniel Sarafian this Saturday in Goiania, Brazil. “I thought that it was a good fight that everyone in Brazil was waiting for. Sarafian is a great fighter and I'm sure we'll put on a show.”

It was a show that should have happened more than a year ago, when the two Team Belfort squadmates on season one of The Ultimate Fighter Brazil closed the brackets and wound up in the middleweight final. But when an injury forced Sarafian out of the UFC 147 match in June of 2012, Ferreira took the season crown with a decision win over replacement foe Sergio Moraes, and Sarafian was forced to sit and watch.

17 months later, the two have moved on, with Ferreira submitting Thiago Santos in August after more than a year off due to injury, and Sarafian splitting a pair of Octagon bouts with CB Dollaway (a Fight of the Night decision loss) and Eddie Mendez (a June submission win). But this weekend, they renew acquaintances in a co-main event bout that may have even more attached to it than the scrapped first fight did. Now both men are legitimate prospects at 185 pounds, and a big victory can do wonders for the winner’s future. It’s a future that the 28-year-old Ferreira isn’t even addressing.

“At the moment, I have a single focus, and that is Sarafian,” he said. “I will go all out to win this fight and then we'll think about the next step.”

What also makes this fight bigger than the original TUF Brazil 1 final is the fact that we’ve seen what both men can do in the Octagon since then. Ferreira can knock you out or submit you, while Sarafian is always looking for the finish. Yet when you ask “Mutante” how his opponent has changed since their time as teammates, he’ll say not much.

“I did not see anything different in his two fights (since the show),” said the Sao Paulo native. “But I know that everyone trains hard and tries to improve. That's why I 'm always prepared and ready.”

And with the impressive August victory over Santos, which took just 47 seconds, Ferreira shook off the rust of his layoff and got his name back on the fight fans’ radar.

“I was very happy to be back and to have made a good fight,” he said. “Despite having been a long time without a fight I had good time to prepare and improve my technique.”

He’s had ample time to get ready for this one, and with his mentor and Blackzilians teammate Vitor Belfort also on the same card, this event holds even more meaning for “Mutante.”

“It will be very cool to fight in the same event that Vitor is,” he said. “I followed his career since I was a child and it's been nine years that we’ve trained together. I'm very happy to be on the same card.”

On Saturday, the co-main event. In the future, maybe Ferreira will join Belfort in the headliners club. That’s the goal, and he’s willing to put the work in to get there.

“I train to improve every day and not just for the next fight,” he said. “You can be sure that every fight I'll introduce myself as a better and different athlete.”