Before Chan Sung Jung and Yair Rodriguez ended their dual absences in Saturday night’s main event, five pairs of competitors — half veterans, half promising newcomers — made the walk to the Octagon inside Pepsi Center.

The collection included a former champion, two former title challengers, and a pair of experienced talents, along with a Contender Series standout, an Ultimate Fighter showdown that never materialized on the show and a 23-year-old Brazilian looking to make an immediate impact in the deepest division in the sport.

And all five bouts delivered.

Here’s a look at what went down on the UFC Denver main card.

The veteran gunslinger and the rambunctious knockout artist clashed in Saturday’s penultimate bout, a welterweight contest that everyone except “Cowboy” wanted to turn into a grudge match and a potential “passing of the torch” situation.

While Perry tried to get Cerrone heated in the preamble to their firefight, the proprietor of the BMF Ranch wanted no part of it, making it clear that his issue was with Perry’s cornerman and his former coach, Mike Winkeljohn, and not that man he was sharing the cage with on Saturday.

Besides, the 35-year-old Cerrone was more focused on putting on a show for the hometown crowd in Denver and breaking up the three-way tie between himself, Georges St-Pierre and Michael Bisping for the most wins in UFC history while also picking up the record for most finishes in the Octagon.

After a surprisingly tactical start to the bout, Perry was the one who took the fight to the canvas and it proved to be costly as Cerrone hit a sweep from side control to take his back before a scramble resulted with “Cowboy” on bottom. As Perry looked to posture up and strike, Cerrone latched onto an armbar.

Though Perry tried to slam his way free, Cerrone held on, landing belly-down and torqueing back to collect the tap and send the partisan crowd inside Pepsi Center into hysterics, celebrating inside the cage with his son Dacson and his family. 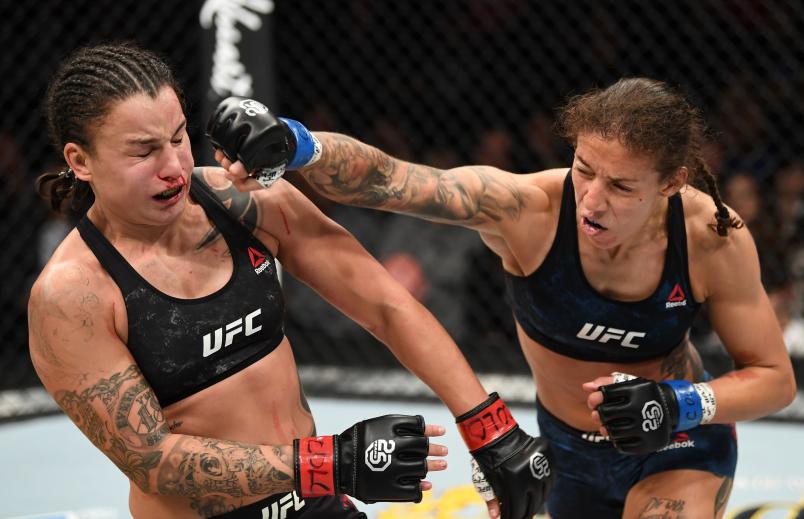 The last time each of these women fought, UFC gold was on the line.

For Colorado Springs’ Pennington, it was this past spring in Rio de Janeiro, when she unsuccessfully challenged Amanda Nunes for the bantamweight title in a one-sided contest..

Holland’s de Randamie last competed at UFC 208 in February 2017, where she scored a unanimous decision win over Holly Holm in a controversial bout that saw her crowned the first UFC women’s featherweight champion. But injuries and a lack of interest in facing Cris Cyborg put “The Iron Lady” on the sidelines, resulting in her being stripped of the belt and returning to the bantamweight ranks for this crucial clash with Pennington on her home turf.

The opening five minutes was dominated by clinch fighting, with de Randamie attacking with knees and Pennington working to control space and force the former featherweight champion to carry her weight. When they were in space, the Dutch veteran dominated, connecting with a handful of power shots that forced “Rocky” to rush in, looking for takedowns.

In the second, de Randamie worked to maintain distance, cracking Pennington with long one-twos that caused her nose to start leaking before the hometown favorite closed the distance and turned the second half of the frame into a grind along the fence, landing some quality short shots inside late in the round.

As the third got underway, de Randamie got back to working in space, connecting with a collection of clean, straight shots and punishing leg kicks. But once again, Pennington responded by closing the distance and looking for the takedown, settling for control position out front against the cage.

Following a brief pause for an inadvertent low blow, Pennington rushed back into the clinch, pushing de Randamie into the fence, absorbing some knees to the body before “The Iron Lady” broke free and tried to unload right before the horn.

With the full 15 minutes off the clock, the results came down to what the judges valued more — de Randamie’s work in space or Pennington’s control and positioning along the fence.

When the nines and tens were tallied, they fell in favor of de Randamie, who pushed her winning streak to four with the victory.

Originally scheduled to face Chris Gruetzemacher, the returning Dariush instead faced off with promotional newcomer Moises on Saturday evening.

Once stationed in the Top 10 in the treacherous lightweight division, a three-fight stretch without a victory dropped Dariush from the rankings and left him searching for answers in Denver. Stepping up on short notice, the 23-year-old Moises looked to earn the biggest win of his career and stamp himself as someone to watch in the 155-pound weight class heading into 2019 by extending the veteran grappler’s slide.

This one started as a chess match along the fence and on the ground, with Dariush initiating the clinch and hunting for takedowns as Moises diligently worked to defend, mixing in some solid counter-wrestling and a pair of unsuccessful guillotine attempts along the way. In the middle stanza, Dariush got the fight to the floor without much trouble, taking Moises to the canvas within 30 seconds and maintaining control throughout the frame, including threatening with a rear-naked choke through the horn.

After eating a clean right hand down the pipe to begin the third, Dariush quickly closed the distance, landing in top position once again after Moises jumped into another unsuccessful guillotine attempt. With three minutes left in the frame, Dariush climbed onto Moises’ back and locked on the body triangle while trying to sink in a fight-ending choke.

The newcomer defended well and the finish didn’t come, but after a close start, the savvy veteran turned this one into a lopsided affair and earned a clean sweep of the scorecards.

While many viewed this as a showcase opportunity for Barber, the 20-year-old Contender Series standout and unbeaten strawweight with championship ambitions, Cifers entered Saturday’s contest on a five-fight winning streak with designs on sending shockwaves through the division by handing “The Future” her first loss.

From the jump, Barber and Cifers kept a torrid pace, battling in space and in the clinch through the opening five minutes, each landing a number of blows, with the 20-year-old connecting on the more telling strikes late in the frame.

Early in the second, Barber split Cifers open with a nasty standing elbow, prompting Cifers to take the fight to the ground. Though she attacked with submission attempts, Barber shrugged them off with little trouble and unleashed hell, bludgeoning Cifers with ground-and-pound that left her sporting a crimson mask and multiple lacerations.

What started as a competitive contest turned into an absolute mauling and highlighted why many view Barber as a potential champion.

Adversaries picked right after each other on Season 27 of The Ultimate Fighter, Team Miocic’s Trizano and Team Cormier’s Pena both won their opening round matchups to set up a semifinal showdown with each other, but it wasn’t meant to be.

A foot injury forced Pena from the competition, however “Violent Bob Ross” was healthy by the finale and while Trizano posted a unanimous decision win over Joe Giannetti to join the fraternity of Ultimate Fighter winners, Pena quickly submitted Richie Smullen to leave everyone wondering what would have happened if these two had met as scheduled in the semis?

That question was answered in the opening bout of Saturday night’s main card.

Right out of the gate, Trizano started landing low, inside kicks, reddening Pena’s lead leg and forcing the AKA representative to alter his approach. While it was Pena who closed the distance and initiated the clinch, Trizano was the one who looked to capitalize, jumping on a guillotine choke to no avail before the opening frame ended in a scramble. 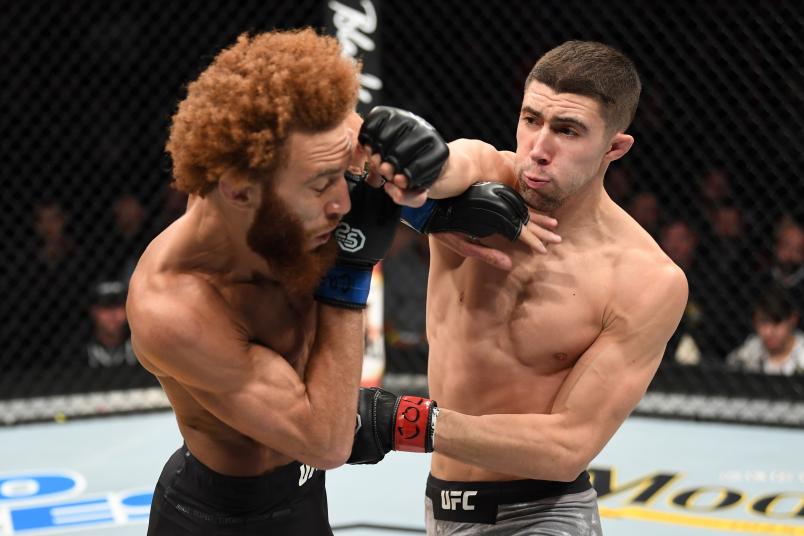 It was more of the same to start the second, but this time, when Pena initiated the clinch, he was able to climb onto Trizano’s back, dragging him to the canvas and attacking with a rear naked choke. But Trizano defended well and reversed position, landing in top position late in the frame, connecting with short hammerfists as Pena looked for submissions and sweeps through the horn.

The third began in familiar fashion, with Trizano scoring with low kicks and forcing Pena to work to get inside. Once they did lock up, Trizano quickly worked back up to his feet and spun Pena to the canvas before two spent the final 45 seconds trading blows on the feet with the TUF winner getting the better of the exchanges.

It may not have been as emphatic as he would have liked, but “The Lone Wolf” validated his TUF 27 triumph and collected his second straight UFC victory in the process.