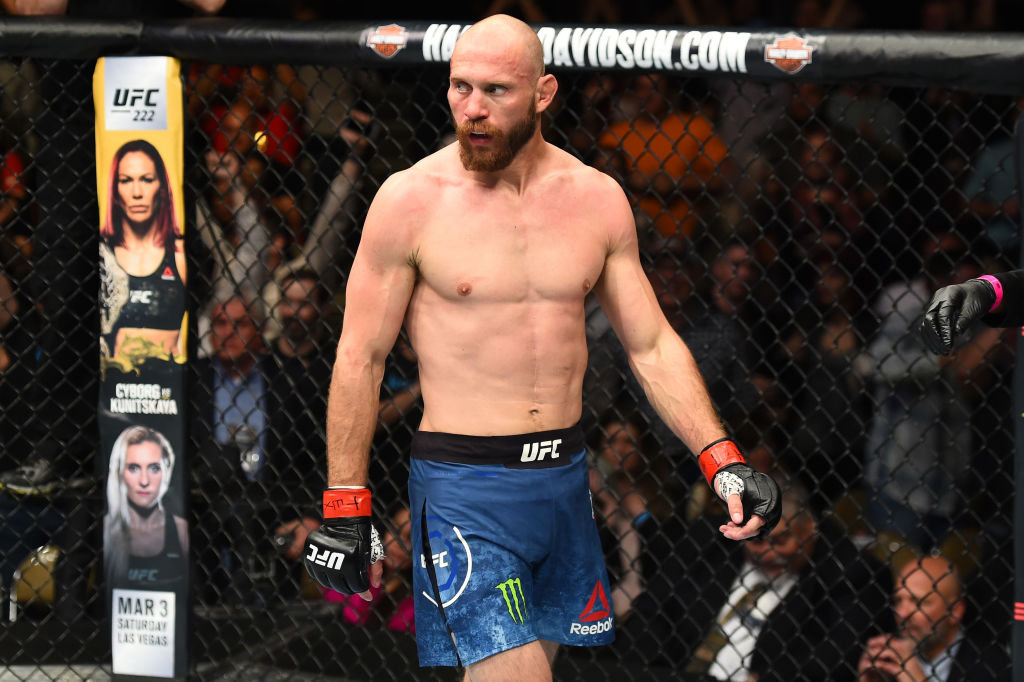 Most fans probably consider Donald Cerrone a UFC lifer – a guy that will swagger into the Octagon into his mid-40s, trading blows with whomever, wherever, whenever at an age when most of his contemporaries are already several years into retirement.

Although that is probably the case and Cerrone does in fact want to keep slinging hands for as long as the UFC will let him, even the ultra-popular “Cowboy” was a little worried about his place on the roster heading into his fight with Yancy Medeiros earlier this year.

“I felt like I was getting pretty close to the chopping block,” said Cerrone, who halted a three-fight losing streak by stopping Medeiros in the first round of their February headliner in Austin, Texas. “I don’t know if four would have done it, but damn it would have been pretty close, so I was more concerned with keeping my job than anything.

“Losing sucks,” added the 35-year-old veteran. “I’m so competitive with anything I do. I do a lot of competition shootings when I’m at home and the night before my shoots, I just get so geeked to compete. Lindsay’s like, ‘How are you so excited to go shooting?’ and it’s because I love the competition of anything.”

Competing in the Octagon is at the top of that list and Saturday in Singapore, Cerrone gets the chance to do it again when he steps in opposite surging British upstart Leon Edwards.

OUT OF NOWHERE! Flash to 2014 when @CowboyCerrone showed why MMA is so exciting. #UFCSingapore pic.twitter.com/DPZdwlRfg8
— UFC (@ufc) June 21, 2018

Riding a five-fight winning streak, the 26-year-old Edwards has quietly started making his way up the welterweight rankings, entering Saturday’s affair stationed at No. 13, two spots behind the man he’ll face this weekend. Brimming with confidence and eager to vault into the Top 10 with a strong showing against Cerrone, the West Midlands man has made it clear that he believes “Cowboy” isn’t on his level and that youth will be served on Saturday.

Even though he’s one of the most ornery competitors in the sport when it gets down to brass tacks, Cerrone has never really been one to talk trash prior to his fights and is generally nonplussed whenever an opponent opts to go that route.

While hearing Edwards call him “old and slow” provided the proprietor of the BMF Ranch with the opportunity for a terrific comeback – “You’re going to have to go home and tell your mama that an old, slow man beat you’re a**” – Cerrone remains unsure why so many of his opponents and other fighters feel the need to bump their gums in the build-up to fight night.

“We were out here for the pre-sale and he was just really arrogant and I was like, ‘Bro, we don’t fight for like another month. You don’t have to be angry right now. I haven’t done anything to you,’” Cerrone said with a laugh.

“This whole idea that ‘You need to act like Colby Covington and be a p***k’ is not the way it needs to be. Be cool. Fans don’t like you to be a d***head; I don’t know why people think that’s cool. Be cordial, man.

“You’re here on vacation, in one of the best destinations in the world, and you want to be angry all week? You’re a f***ing idiot.”

Besides, it’s not like Cerrone isn’t going to turn up Saturday night, so why not save all that energy for the fight itself?

“We’re going to fight,” he laughed. “It’s not like we’re not gonna fight, but it’s whatever.”

While he’s amused by Edwards’ pre-fight aggression, everything else about his return to the cage this weekend is exciting for Cerrone.

After making multiple trips to Asia during his kickboxing days, Saturday’s contest marks the first time in over a decade that he’s had to the chance to compete there and it also provides him with an opportunity to etch his name in the UFC history books as well.

Currently in a three-way tie with Georges St-Pierre and the recently retired Michael Bisping, a victory this weekend would be Cerrone’s 21st inside the Octagon, moving him into top spot on the UFC’s all-time wins list. It’s an incredible achievement, should it happen, and one made only more impressive considering “Cowboy” spent three years plying his trade in the WEC while St-Pierre and Bisping were already stacking up victories inside the UFC Octagon.

“I’m glad to be back in Asia,” said Cerrone. “I love it over here; I used to fight all the time in Asia. It’s cool to come back and fight. I don’t know if the opponent strikes me anymore or not, but I’m excited to go out there and set records this weekend.”

Most of all, he’s just excited to go out there and do what he loves to do one more time.

“This is one of my favorite things on the planet to do – I love it, love it, love it,” he added. “He called me ‘old and slow’ and I might be old and slow, but there are a lot of old, slow years of being in there and that has to count for something.”