For Cerrone, it's still 'Anyone, Anywhere, Any Time'

Donald Cerrone has always lived by the “Anyone, Anywhere, Any Time” mantra, but even the veteran gunslinger admits it’s nice to roll into familiar territory for his showdown with Yancy Medeiros in Sunday night’s main event at the Frank Erwin Center.

“I’ll fight anywhere, I don’t care,” said Cerrone, who has made countless training and recreational trips to Austin in the past, but will be fighting in the Texas capital for the first time this weekend. “But it’s cool to be able to have all my friends down here. We’re real familiar with this area and I love it – love Texas, love Austin – so it’s all good.”

Cerrone heads into his headlining assignment opposite Medeiros in unfamiliar territory. 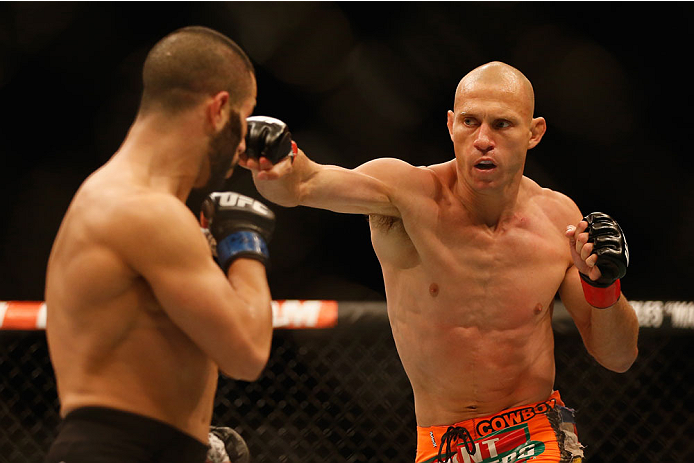 John Makdessi during the UFC 187 event on May 23, 2015 in Las Vegas, NV. (Photo by Christian Petersen/Zuffa LLC)" align="left" />After going 10 years and 40 fights without ever suffering back-to-back losses, the 34-year-old veteran has dropped three straight, making 2017 the first year of his career where Cerrone did not register a victory.

Situations like this can often bring about periods of deep introspection and reflection for fighters – extended layoffs to ponder the future or training camp changes designed to shake things up can often be a part of the mix as well – but the veteran gunslinger has never been one to over-think things.

“Masvidal f***** me up, the fight with Robbie was close and I fought one of the best in the world and then Darren Till whipped my a**; what can I say? “ asked Cerrone while doling out coaching advice to his running mates shooting traps in the Texas back country. “That’s how it goes. This is a hell of a sport to be good at, man.

“It is the hardest sport in the world to be excellent at, I promise you that.”

While competitors in other sports may beg to differ, there is a case to be made for what Cerrone is saying, as the margin of error in mixed martial arts is exceptionally small and each foray into the Octagon can have a dramatic impact on the direction of your career and perception of your ability as a fighter.

Heading into this weekend’s event in Austin, Cerrone has dropped three straight and there are questions about how much longer the former WEC standout can and will continue to be one of the top competitors in his division.

But how different would the conversation be if Cerrone came out on the right side of the results in his close UFC 214 clash with Lawler, the former welterweight champion? How different would his loss to the surging Liverpudlian Till look if it came following a victory, rather than as his third straight setback?

As veteran welterweight Thiago Alves said earlier this week, “Sometimes you have everything right, you do everything right and the result doesn’t come your way; it’s not fair, but it is what it is.”

That’s the way Cerrone sees things as well, though he did admit that getting thumped by the 24-year-old Scouser in Poland last October did lead to him buckling down and dialing in a little more this time around.

“This is probably one of the hardest I’ve trained in a long time, so thank you Darren Till for the a**-whoopin’ and lighting a fire under my a**,” said Cerrone, the long-time Jackson-Wink MMA representative who does the majority of his work at his personal gym on his property outside of Albuquerque. “It was good.

“My coaches are ready, friends are ready and we put a lot into this camp,” he added. “There are no excuses, man. This is it.”

In addition to competing in familiar surroundings and needing to snap the first, only and longest losing streak of his career, Cerrone is also amped up to get back to business on Sunday because of the prospect of sharing the cage with Medeiros.

Following the same trail from lightweight to welterweight that “Cowboy” blazed a year earlier, Medeiros has moved up to the 170-pound ranks and rattled off three straight stoppage victories. Most recently, the 30-year-old Hawaiian went shot-for-shot in a wildly entertaining back-and-forth clash with Alex Oliveira that earned Fight of the Night honors at UFC 218 in Detroit.

Those kinds of shootouts are quickly becoming Medeiros’ trademark, and that’s exactly what Cerrone is hoping for when they step into the cage to spend their “Sunday Funday” together.

“He’s a tough Hawaiian and he’s going to give us the fight everyone wants to see,” Cerrone said of Medeiros. “He’s going to stand in the middle and just throw down and, to me, I love it. It’s going to be a hell of a fight.”

And even if things don’t go his way this weekend, don’t except Cerrone to be hanging up his four-ounce gloves and calling it quits any time soon.

Crazy as it sounds, would you really put it past him?