Cerrone: 'I'm Cowboy and this is what I love to do'

When it’s time for Donald Cerrone to saddle up and ride into the Octagon again, his chief concern isn’t his opponent, it’s when and where. The time and the place are of paramount importance to “Cowboy,” the most active fighter on the UFC roster and one of the few competitors whose resume backs up his willingness to fight anyone, anywhere, at any time. 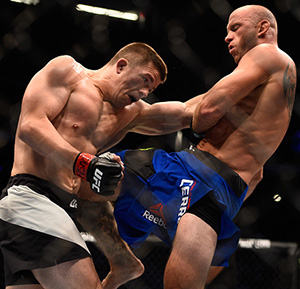 Rick Story in their welterweight bout during the UFC 202 event at T-Mobile Arena on August 20, 2016 in Las Vegas, NV. (Photo by Jeff Bottari/Zuffa LLC/)" align="right" /> “Whenever I call the UFC, I never say who, I ask for a when,” said Cerrone, who squares off with Darren Till in the main event of this weekend’s UFC Fight Night event in Gdansk, Poland. “I need a date so I can structure my world around it, start getting things planned about how I’m going to get there, but I never care about the who; the who never matters.

“In my mind, fighting the No. 2 guy or the No. 200 guy is the same difference,” added the 34-year-old, who currently sits at No. 6 in the welterweight rankings. “I don’t get more pumped up for an opponent. When guys want to run their mouth, I don’t get more excited. It’s a job to me now. I love fighting, so there is nowhere I’d rather be than in the Octagon throwing down. That’s why the opponent never mattered to me.”

On one hand, the “take on all comers” approach is part of what has ingratiated the veteran gunslinger to fight fans who have rode with the proprietor of the BMF Ranch since his days as a top lightweight in the WEC. On the other hand, even Cerrone is able to recognize it’s not necessarily the soundest strategy when it comes to maintaining his place in the pecking order.

Good thing he’s not worried about such trivialities. 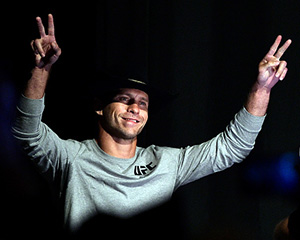 “What am I sitting now, fifth or sixth?” he asked, not particularly worried about getting confirmation of his standing in the 170-pound ranks. “(And) the opponent I’m fighting, he’s not even ranked, so it’s a super-dangerous fight for me, but it’s like, ‘Why would I want to just hold on to this number?’

“You see a whole lot of guys who try to get into the Top 10 and just sit there, but if you’re a fighter, you fight anybody, so what’s it matter what he’s ranked? Who cares?

“If you want to be the best, you’ve got to fight everybody; that’s the mentality we have,” he said of himself and the handful of fighters who live and train with him at his home gym on his property in Edgewood, 30 miles east of Albuquerque. “When they call us coming off a loss to fight Robbie Lawler? Yeah, we take that fight. Big deal.

“Coming off two losses, go fight Darren Till in Poland? Yeah, we take that fight, sure. It’s just do what you gotta do. Get it done. Find a way.”

While he’s never been too concerned with the name he’s given, this weekend’s bout with Till has morphed into something bigger than just a battle between a seasoned veteran and a feisty upstart looking to collect the biggest win of his young career.

Shortly after the bout was announced, Cerrone admitted that he was completely unfamiliar with the man he’ll face this weekend at Ergo Arena, a statement that didn’t sit too well with Till, who has since made numerous comments about how he sees Saturday night’s main event playing out.

“It was no disrespect to him or the skills that he has; I just I don’t know every fighter in the 170-pound division, the new division I just started in,” explained Cerrone, who is looking to get back into the win column and snap the first two-fight losing streak of his career in Gdansk.

RELATED: Cerrone vs Till Preview | Free Fight: Cerrone vs Story | Cerrone - Till Needs A Reality Check

“I hear all these comments people keep telling me about him and it’s like I have more Fight of the Night, performance bonuses than you have fights. You want to come at me with crazy talk, talk s*** – you’re undefeated, good, name a Top 10 fighter you’ve fought? Look at my roster – all I fight are Top 10 guys.” 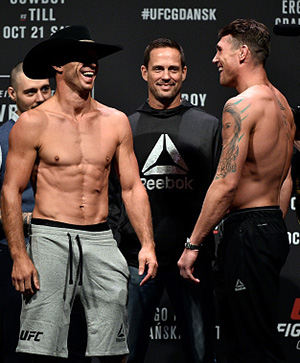 Quick as he may be on offering up a quick retort to an opponent who has gotten under his skin, Cerrone’s preference has always been to smile and shake hands at every faceoff and then sling leather once the lights come on, eschewing the trash talk in favor of actually settling things inside the cage.

And although he finds Till’s bold proclamations and social media presence in the preamble to their meeting this weekend more amusing than insulting, it’s clear that the ornery contender is fired up and looking forward to sharing the cage with the brash Liverpool native on Saturday.

“Does he hit hard? Probably. Does he have great striking? Probably. Is he a great wrestler or have great jiu-jitsu? Good, that’s what you’re supposed to be to be at this level and fight in the UFC,” he said. “I’ve seen it all, man. I’ve been there and I’ve done it and this is what I f***** love to do. Bring it on. Smash my face in.

“He’s never been past the third round,” he added in regards to Till. “He’s never fought anyone the caliber I am, so come the second round, we’ll see how he’s sucking wind. Come the third round, if he’s not already finished, it’s going to be bad news.

“I suggest you come fast and you come hard,” he said, offering his opponent some friendly advice. “Because otherwise it’s going to be a long, long night for you.