Cerrone Decides It's Time For The Belt

“Before I was fighting to fight and because I loved it — loved the adventure, the danger, the legacy, the journey — but now it’s time to go and get this belt,” said Cerrone.
By E. Spencer Kyte • Jun. 5, 2019

For the longest time, Donald Cerrone didn’t care about winning streaks, rankings or championship belts. He was the standard-bearer of the “anyone, anywhere, anytime” ethos that so many competitors claim to live by but fail to put into practice, accepting quick turnarounds, tough assignments, and unranked replacements without batting an eye.

If the phone rang and he wasn’t already otherwise engaged, Cerrone was down to scrap and the circumstances surrounding the bout or the ramifications of the bout’s outcome were of no concern to the all-action fighter.

For instance, take the start of Cerrone’s 2015 campaign.

Entering the year on a five-fight winning streak that included finishes over Edson Barboza and Jim Miller and a unanimous decision victory over Eddie Alvarez in his promotional debut, “Cowboy” made the September to January turnaround to square off with Myles Jury, then an unbeaten rising star in the lightweight division.

Two days after handing Jury his first loss and pushing his winning streak to six, Cerrone agreed to replace Alvarez in a co-main event assignment against former WEC and UFC lightweight champion Benson Henderson 10 days later in Boston. It didn’t matter that he’d just earned a victory, was already on the short list of potential title contenders or that Henderson had beaten him once before.

The phone rang, he didn’t have anything else lined up, and so he accepted. After beating Henderson, he was paired off with undefeated standout Khabib Nurmagomedov in what many viewed as a title eliminator on the undercard of UFC 187. When Nurmagomedov was sidelined with an injury, Cerrone didn’t give any thought to not fighting, quickly accepting a bout against Canadian John Makdessi, whom he went out and dominated to extend his winning streak to eight.

Few fighters on a similar run would have stepped in against Jury. Even fewer would have turned right around and taken on Henderson, and when Nurmagomedov went down, most would have opted against risking their place in the pecking order, but not Cerrone. He’s like the UFC version of an improv troop member, except instead of saying, “Yes, and…” he just says, “Yes” and goes about his business.

Four years later, a lot of those things still hold true about the 36-year-old gunslinger, with one distinct difference: while he’s still making quick turnarounds and accepting fights regardless of opponent, date or location, now it’s all with the goal of capturing the UFC lightweight title in mind.

“Before I was fighting to fight and because I loved it — loved the adventure, the danger, the legacy, the journey — but now it’s time to go and get this belt,” said Cerrone, who returns this weekend against Tony Ferguson a little over a month after earning a unanimous decision victory over Al Iaquinta in Ottawa, Ontario, Canada. “This is what I do and I love it, man.”

Cerrone’s shift in focus came with the arrival of his son, Dacson Danger Cerrone, who was born just a handful of days after the veteran landed on the wrong side of a unanimous decision result against Leon Edwards in Singapore last summer. 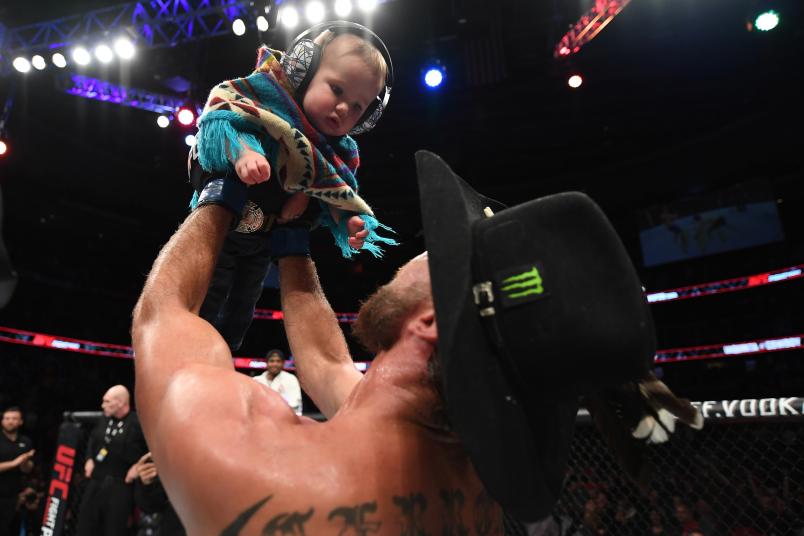 OTTAWA, ON - MAY 04: Donald Cerrone celebrates with his son Dacson Danger Cerrone after his victory over Al Iaquinta during the UFC Fight Night event at Canadian Tire Centre on May 4, 2019 in Ottawa, Ontario, Canada. (Photo by Jeff Bottari/Zuffa LLC/Zuffa LLC via Getty Images)

OTTAWA, ON - MAY 04: Donald Cerrone celebrates with his son Dacson Danger Cerrone after his victory over Al Iaquinta during the UFC Fight Night event at Canadian Tire Centre on May 4, 2019 in Ottawa, Ontario, Canada. (Photo by Jeff Bottari/Zuffa LLC/Zuffa

After years of chasing paydays and records without any consideration of the title, the birth of his son made the proprietor of the BMF Ranch recalibrate his way of thinking.

Following his win over Mike Perry at home in Denver, Colorado, Cerrone declared that his time as a welterweight was over, explaining that he was headed back to ’55 with his sights set on capturing championship gold.

He won that fight by second-round technical knockout, finding his range and his rhythm before felling the aggressive youngster with a head kick. Last month, he ventured to Canada and dispatched Iaquinta, dominating the tough-as-nails New Yorker in one of the most impressive all-around efforts of his 13-year, 48-fight career.

And when the phone rang a couple days later, Cerrone answered like he always does, saying “yes” without hesitation to sharing the cage with the Ferguson on Saturday night at UFC 238.

“I said ‘yes’ right away; it took him three or four days of me baiting him to do it and I don’t blame him because I’m a scary dude to fight,” he said regarding the quick turnaround. “He was sitting as the No. 1 contender already, (so I understand him being hesitant). It makes sense for him to be like, ‘F*** this — I’ve already got the spot,’ but here we are.

Not only does Ferguson enter as the consensus top contender in the lightweight division, but he also arrives in “Second City” on an 11-fight winning streak that includes victories over former champions Rafael Dos Anjos and Anthony Pettis and an interim title win over Kevin Lee.

While injuries and personal issues have limited him to just two appearances since November 2016, Ferguson has always returned to the cage showing no signs of rust and found a way to keep things moving in the right direction.

With champions Khabib Nurmagomedov and Dustin Poirier officially signed up for a title unification bout this September in Abu Dhabi, many see this as a bout to determine who will face the winner of the UFC 242 “Champion vs. Champion” clash for the undisputed lightweight title.

“(The name) didn’t matter,” Cerrone said regarding the quick turnaround to compete this weekend at the United Center. “They called me and asked me to fight and I was like, ‘Yes.’ It could have been anybody, to be honest with you, but this one puts me in the No. 1 contender spot, so it sure makes sense, don’t it?

“I didn’t even think about stopping his winning streak because I don’t think about the s*** he’s got going on,” he added. “Our fight is being called ‘The People’s Main Event’ and that’s pretty cool. I like the hype. It’s awesome.”

He also likes the idea of sharing the cage with a fellow all-action fighter with a penchant for collecting bonuses, but not because it brings a higher likelihood of being pushed or anything like that.

“Another bonus would be good to me because I want to buy a new RV, so it’d be great if he could help me out,” said Cerrone, who holds the record for the most wins, finishes and post-fight bonuses in UFC history.

In many ways, Cerrone’s bout with Ferguson feels like déjà vu all again, to borrow a phrase from Yankees great Yogi Berra — a rapid turnaround into a tough fight against a dangerous opponent, all while things are moving in the right direction for the Top 10 mainstay.

But unlike previous instances, the ornery “Cowboy” has a clear focus and a completely new motivation propelling him into the cage and has no intention of letting Tony Ferguson slow him down this weekend in Chicago.

“It feels good to finally be mentally ready for it,” Cerrone said of Saturday’s crucial lightweight contest. “That’s the biggest thing. I’m older and more mature now, so days I feel sore, I’ll just take off and go to the lake and play.

“But my body feels good, I feel strong and I’m mentally strong. (Competing like this) is what I love more than anything and it’s hard to stop crazy, you know?

“(Saturday night), I’m going to go in there, finish this fight, get my hand raised and then go on and get this belt.”

Doubt him at your own peril.