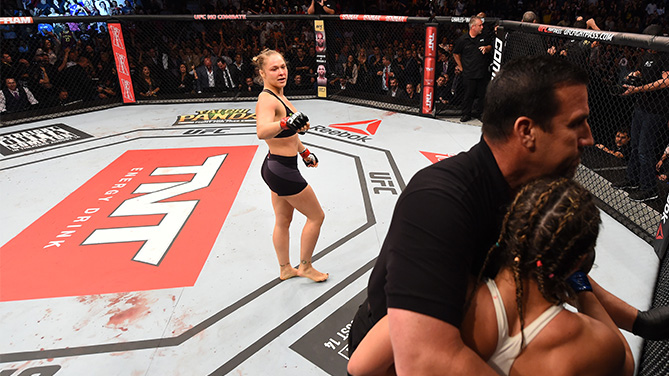 Bethe Correia did everything she could to get a rise out of Ronda Rousey ahead of their showdown at UFC 190.

From the verbal warfare she waged on the road to UFC 190, to the angry tirade she spewed in the face of Rousey during their final stare down at the weigh-ins - Correia knew that the consequences of a loss would be epic.

Just moments after Correia's head bounced off the canvas 34 seconds after the bell rang for the first round of the women's bantamweight title fight Saturday night, Rousey, the always cerebral champion, needed only a two-word rebuttal as she walked back to her corner to celebrate yet another dominant victory: "Don't cry."

Returning the advice she gave me at weigh-ins #DontCry #UFC190 #andSTILL
A video posted by rondarousey (@rondarousey) on Aug 3, 2015 at 3:24pm PDT

Those two words, Rousey's advice to the brash Brazilian, were the exclamation point to a rivalry that's lasted 15 months.

The rivalry began when Correia raised four fingers and then dropped one, to symbolize her quest to knock off each member of the four horsewomen.

Correia got Rousey's full attention when she knocked off Shayna Baszler, the second member of the foursome, and claimed that it was she that would retire undefeated - not Rousey. 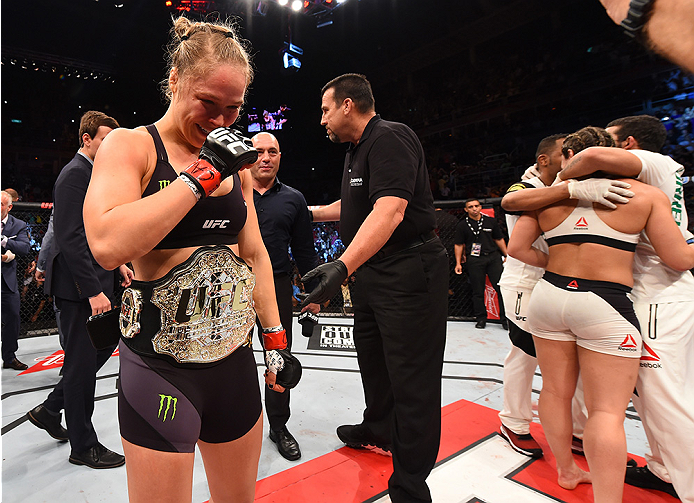 In the lead up to the fight, Correia mocked the champion, going so far as to implore Rousey not to commit suicide after Correia wins and takes the title. Rousey took those words personally, as her father committed suicide when she was only 8 years old.

Little did the challenger know that she was providing arguably the most dangerous woman on the planet with even more motivation than the usual amount that had produced a perfect 11-0 record, including five UFC title defenses. 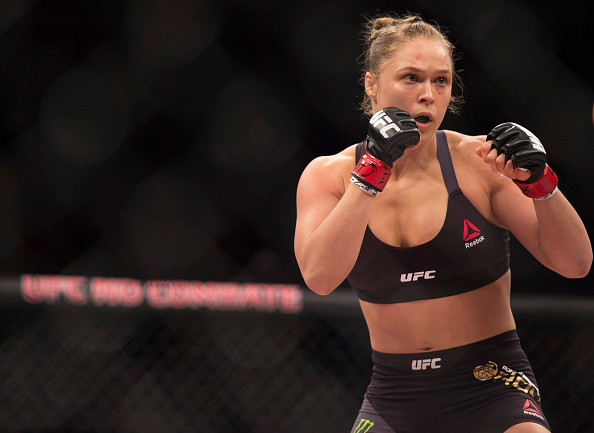 Rousey's facial expression never changed. In fact, every time the two fighters came face-to-face, Rousey maintained an icy focus. Looking back, she was happy to let Correia do the talking. Because, in the end, like all of Rousey's historic victories, she was the one still standing.

The main question mark when it comes to Rousey's game has always been about her standup. On Saturday night, she showcased how far she's come as a striker, clinching only for a few seconds before unloading a technically brilliant barrage that ended with a lethal straight right and a left hook for good measure to put Correia out cold.

As the Brazilian landed, Rousey took a moment to collect herself before turning back to utter those same words that Correia said the night before, "Don't cry." She probably had planned it that way, seething with anger throughout the week with each additional Correia insult.
We shouldn't have been surprised how this fight ended. Rousey said she wanted to beat Correia in the most embarrasing way possible. With the world watching, and in front of a sold-out HSBC Arena in Correia's home country, Rousey succeeded.