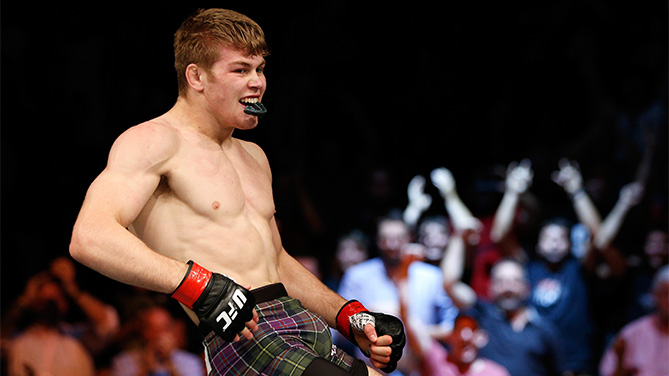 The victory upped the perfect record of Victoria’s Matthews to 9-0; Florida’s Rocha falls to 11-4.

Matthews’ aggressive pressure served him well in the first five minutes as he stalked Rocha around the Octagon. A late takedown by Matthews almost cost him as Rocha tried to sink in a kimura, but the bell intervened before the Aussie was in any serious trouble.

In the second, the physically imposing Matthews continued to dominate, and after landing a Superman punch that rocked Rocha, the Aussie smothered his foe with strikes before sinking in a rear naked choke that put the Brazilian Jiu-Jitsu black belt to sleep. Referee John Sharp halted the fight officially at 1:52 of round two. 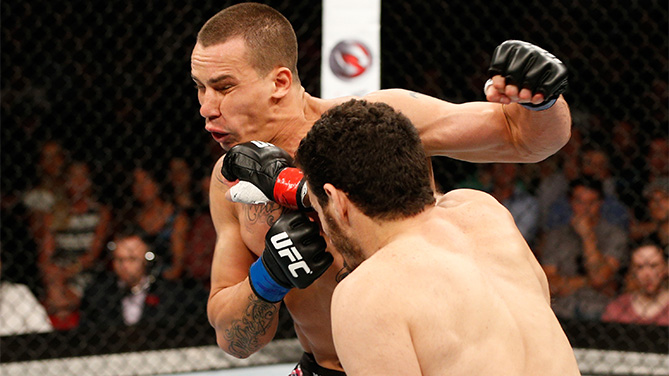 The seemingly ageless Anthony Perosh did it again, as the 42-year-old Australian submitted Guto Inocente in the first round of their light heavyweight bout.

“I want it, and I want to be here,” Perosh said when asked what keeps him going in his 40s.

After a strong right hand in the second minute, Sydney’s Perosh dragged Inocente to the mat and began dropping ground strikes on the Brazilian. With two minutes gone, Perosh got the mount briefly, and though Inocente escaped, Perosh kept the pressure on, pounding away with both hands while continuing to shift position, and eventually he got his foe’s back and sunk in the rear naked choke, forcing a tap out at 3:46 of the first. 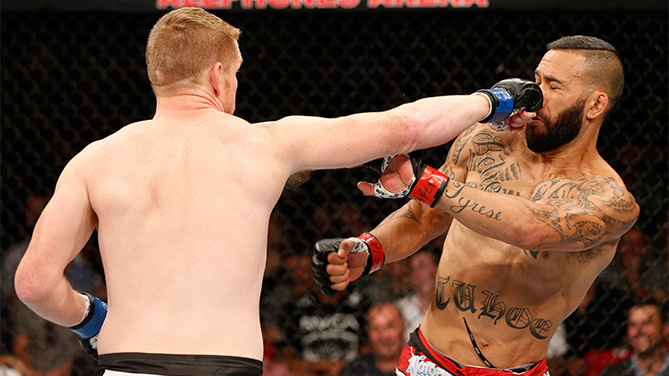 TUF 16 alumnus Sam Alvey earned his first UFC victory and he did it by first round knockout, halting Queensland’s Dylan Andrews in middleweight action.

Andrews got the significant scoring started late in the first minute with a takedown, and though Alvey got back to his feet twice, it was Andrews taking him right back down. But suddenly, after the third takedown by Andrews, Alvey landed on his foe’s head, sprung into action, spun out of trouble and after a quick barrage of punches, Andrews was out and referee Leon Roberts was stepping in to stop the fight at the 2:16 mark.
"I tried that suplex and he came down right on me and I guess I went out," Andrews said. "It was unfortunate." 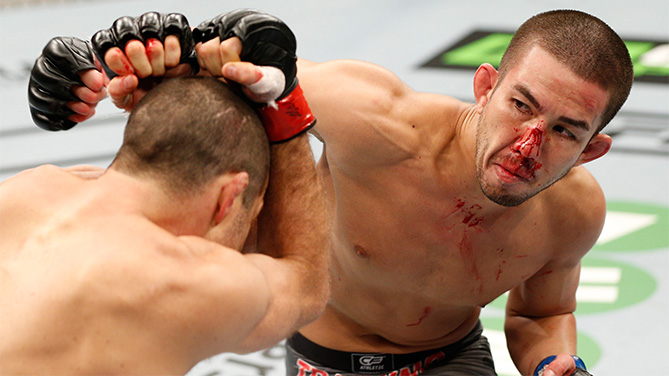 Late injury replacement Louis Smolka made the most of his opportunity down under, finishing off an exciting flyweight bout with Richie Vaculik with a third-round knockout.

Vaculik (10-4) rocked Smolka with a combination in the opening minute, and buoyed by his good fortune, he kept his work rate high. Smolka cleared his head and began tagging the Sydney native with his own punches, and all of a sudden a fight broke out. Bloodied on the bridge of the nose, Smolka began taking the lead in the second half of the round, only to see Vaculik roar back and get the takedown in the closing minute, with the exchanges continuing on the mat.

Smolka (8-1) took control early in the second, but Vaculik’s resilience was once again on display as he took the Hawaiian down and went for a rear naked choke. Smolka escaped and reversed position, eventually scrambling back to his feet with less than two minutes to go, the two battling on even terms until the horn.

Smolka broke things open and ended it early in the third though, with a step-in side kick to the chin dropping Vaculik to the canvas. Smolka pounced with ground strikes, referee John Sharp calling the fight off 18 seconds into the final stanza. 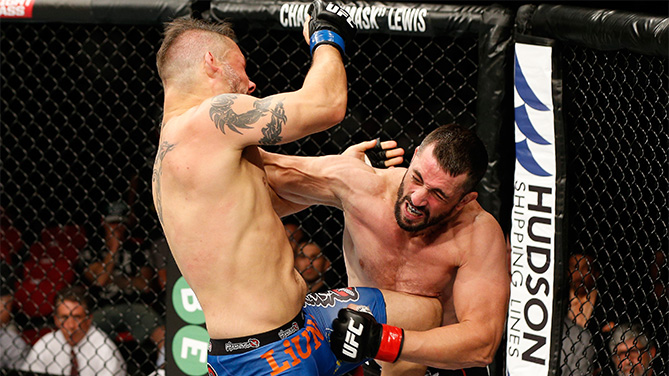 Back in action for the first time since September of 2013, Ontario welterweight Chris Clements made a triumphant return with a first-round TKO of former TUF Nations competitor Vik Grujic.

Grujic (7-5) had some success on the ground and against the fence as the fight began, but a right knee to the head by Clements (12-5, 1 NC) while the two were locked up rocked Grujic. As the Melbourne native staggered across the Octagon, Clements was relentless in this follow-up attack, and after a series of unanswered strikes, referee Herb Dean halted the fight at 3:06 of the first. 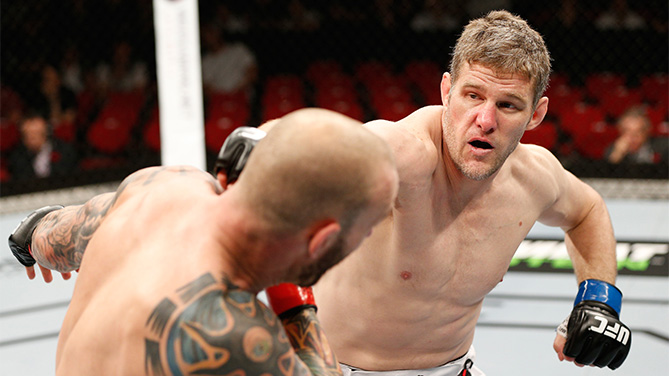 Zachrich boxed beautifully for the first half of the opening frame, sticking and moving while keeping Kelly at bay. When Kelly, did land though, he was marking up Zachrich’s face, and when he did get close with a little over a minute to go, the Team Australia member from TUF Nations tripped Zachrich to the mat and from there it was just a matter of time, as Melbourne’s Kelly locked in a kimura that produced a tap out at the 4:27 mark. 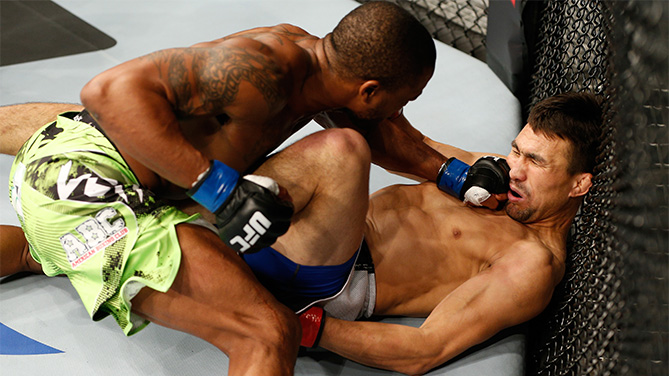 BRIMAGE vs. TUERXUN
Marcus Brimage snapped a two-fight losing streak in impressive style in the bantamweight opener, knocking out Jumabieke Tuerxun in the first round.

Brimage (7-3) was sharp from the start, determined to get back in the win column, and his movement, quick strikes and fakes left Tuerxun (17-3) unable to get anything done offensively. After yet another fake, Brimage threw a left kick to the head and clipped Tuerxun on the chin. The Xi’an, China product hit the deck hard and the follow-up strikes weren’t even necessary, as referee John Sharp intervened at the 2:58 mark.