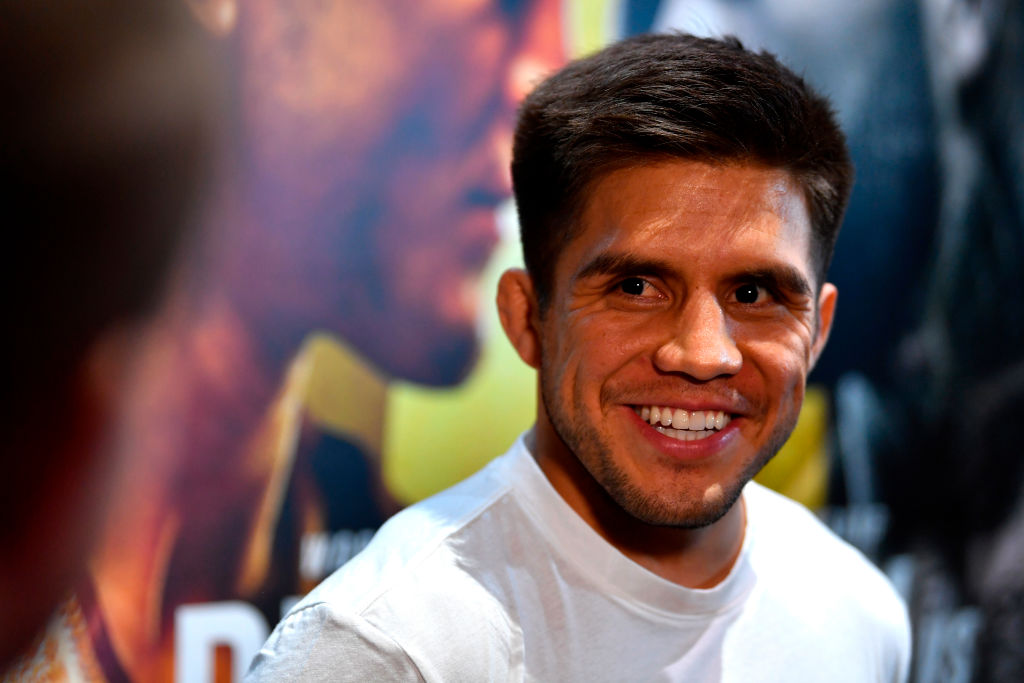 On August 4th, Henry Cejudo will get a second chance to do what no man thus far has been able to do: dethrone Demetrious Johnson for the UFC featherweight title. The two first met at UFC 197 in a bout that needed less than three minutes for Mighty Mouse to work his magic. In his quest to turn the tables, Cejudo has traveled the world to meet with the best training partners, and taken a philosophical approach to besting his opponent. We caught up with him in Los Angeles just ahead of his co-main appearance at UFC 227.
UFC: How’s fight week going for you so far?
HC: So far, so good! I’m excited to be back in my hometown, I was born here and lived here until I was five years old. Our house was about ten minutes away from the Staples Center. It was a little two bedroom apartment with me, my brothers, my sisters. At that time we were all united with my dad and my mom. Sometimes my uncle would come. There was maybe ten people in a two bedroom apartment. So to go from there to fighting at the Staples Center where I watched De La Hoya and people like that, it’s amazing, man. Not only that but I’m fighting the pound-for-pound best fighter in the world and I accept that. I embrace that. It’s truly surreal.
UFC: You’ve got six siblings, it must be a big party when you fight.
HC: It is, but my family gets nervous. We’re a very tight knit family. They go to all my fights, they’ll travel, they’ll miss work, they’ll get fired. But they do whatever they have to do to support their brother. That’s a motivator for me.

UFC: I hear you’ve been traveling a lot to get the best help for this fight.
HC: Yeah, I traveled the world. I was in Singapore, Thailand, Holland, several trips to Brazil, just learning from the best. I’m the type of guy who travels the world, but I don’t like leaving my house anymore. I don’t. But it’s not about what you want, it’s about what you need. And that comes with being a world class athlete.
UFC: And you’re putting yourself through all this so you can become the champ.
HC: Absolutely. I tell people “you don’t fake it until you make it, you face it until you make it.” I’m facing the guy that knocked me out. I’m facing the guy that will probably be the best MMA fighter in history. But I’m special too, and I can do some incredible things. I respect this man, he’s the real deal. But it motivates me. I’m not gonna shy away from it. Give it to me. Give it to Henry.
RELATED: Cejudo “Anything Can Happen” | Johnson vs Cejudo 2
UFC: How are you a different fighter than you were at UFC 197?
HC: Cuter [laughs]. Expereince. It was a time thing for me. I know DJ has gotten better too, I’ve watched all his fights. But it was a time thing for me: three years into fighting MMA I was fighting for the UFC title. Less than a year in the UFC, I was already offered the belt. Maybe it was a little too soon. But August 4th I’m looking to really fight this man.
UFC: Johnson has been the only champ this division. When you’re the champ, how do you envision the story changing?
HC: It’s a comeback story. I lasted two minutes and 37 seconds [in the first DJ fight]. Damn. To go from that to being the champ? I see it as a story where people will say “Damn, I didn’t believe in that kid after the way he got put out the first fight,” to then say “Who is that kid?” A story you can talk to your kids about. A story you can talk to your kid’s kids about.
To me, it’s not even necessarily about the belt anymore. It really isn’t. It’s about beating the guy that beat me, that’s reigned in the flyweight division for years. Before I ever fought, or even fathomed fighting, Demetrious was already the champion. He’s got his time in this sport, and he’s really the only guy I’ve had to play catch-up with. But it’s been two years since we’ve fought, and I’m looking forward to displaying my art with Demetrious Johnson.
UFC: What would it mean to get the title in the town you were born? Would it complete the circle?
HC: Yeah, it would mean the world to me. It’s no easy task, but it could be done. He bleeds just like me. Everybody bleeds. All you guys bleed. Jon Jones bleeds. Don’t count me out, man, that’s all I’m saying. I’m coming out viscious, smart, and sharp.
UFC: What would your message be to someone who thinks you can’t get this done?

"Everybody has a breaking point." @HenryCejudo has a message for the folks who doubt he can beat @MightyMouseUFC at #UFC 227.https://t.co/utwg6cqbPk pic.twitter.com/RQPtVkILBN
— UFC News (@UFCNews) August 3, 2018

HC: Everybody has a breaking point, man. Everybody’s human. I don’t care if you’ve defended the belt 120 times. It doesn’t change the outcome. You’re a human being just like me.