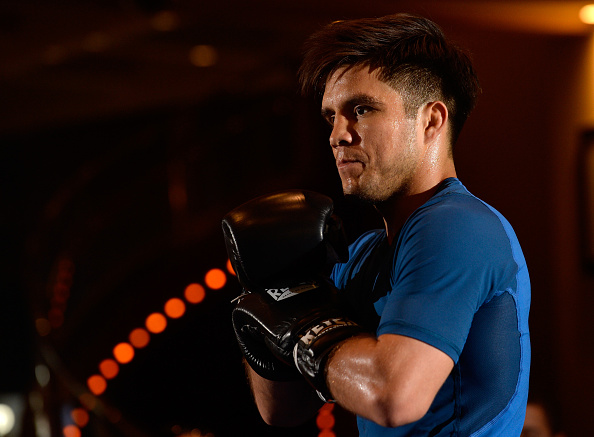 When the fire alarms ringing throughout the Mayacama Golf Club in Santa Rosa, California woke Henry Cejudo in the early morning hours on Monday, October 9, the UFC flyweight contender believed it was just a malfunction; that someone had accidentally tripped the alarm.

He looked out his window and saw no signs of commotion. Glancing into the hallway, everything looked calm, leading Cejudo to believe his initial assessment to be correct. Somewhere along the way, the alarms stopped, but by the time he was awoken for the second time, he knew something was terribly wrong.

“I woke up because I smelled something weird – the smell of something burning,” recalled Cejudo, one of several high profile celebrities and athletes who were staying at the hotel as part of a charity event. “I went to turn on the light in my hotel room and it wasn’t turning on. I started flicking the light back and forth and nothing happened.”

Pulling back the curtains to get some light into the room and survey the situation, the 30-year-old Olympian saw the full extent of the trouble he was in as everything in his view was engulfed in flames.

“This whole place was on fire around me.”

What he didn’t know at the time was that everyone else in the hotel was evacuated when the alarms that first rang out in the wee hours of the morning jostled him from his sleep. While there was no visible commotion in the hallways or area outside his window, everyone on site was vacating the premises as the wildfires that have engulfed Northern California continued to creep closer to the resort.

Struggling to breathe and looking out at a fiery landscape, Cejudo quickly put on the slacks he left on the ironing board the night before, grabbed his cell phone off the charger and opened the window, looking for a way out.

He jumped from his second floor window, landing on a branch that was filled with fire, the tremendous heat causing the bottom of his right foot to blister.

“My adrenaline was running and I was thinking, ‘It’s time to survive,’” said Cejudo. “As I’m walking, I’m dodging the smoke and bits and pieces of fire and I’m looking at houses that were on fire and cars that were on fire. It was me against the world. I was in a ring of fire and I felt deserted because everyone had evacuated. There wasn’t one dog, one cat or one human that I could see that I could ask for help.

Everywhere around me was lit on fire. I thought, ‘This is a horrible way to die

“Everywhere around me was lit on fire. I thought, ‘This is a horrible way to die.’”

Fortunately, it wasn’t Cejudo’s time. He eventually made his way to the freeway where he was able to flag down a fire engine.

“They picked me up, put me in the fire truck and kept asking me questions,” he recalled. “They saw the smoke all over my body – I was covered in black – and my hair smelled like a burnt marshmallow.

“They took me 10 minutes from where the hotel was and they dropped me off at a Safeway supermarket and from there, I called my friends, they came, picked me up and that was it.”

The blaze consumed the resort and the area around it. For Cejudo, that included his gold medal, his Olympic ring and several other items that carry great personal significance and cannot be replaced. But losing those keepsakes is the furthest thing from his mind.

“A lot of people ask me, ‘Are you sad that you lost your gold medal, your ring?’ and I’m just like, ‘No, man – I’m just grateful to be alive to tell this story.’

“It gives you a different perspective on life, on family, on friends and about where you’re going to give your time and things like that,” he added. “I got a second shot at life because if I would have slept in five or ten more minutes, it probably would have been a little too late for me.

“I never would have thought that I would have been part of one of the worst fires in American history. You don’t think of stuff like that, but this stuff can happen to anybody. People think they’re invincible, but think twice. I think if it wasn’t for my fighter instincts, I don’t know if a normal person would make it out.”

Although he’d just been through a traumatic event, Cejudo gave no thought to postponing his clash with Sergio Pettis at UFC 218 in Detroit.

Within days of the fire, he was on a plane, headed for Natal, Brazil, where he has been sharpening his skills alongside the Pitbull Brothers, eager to build off his first-round knockout win over Wilson Reis at UFC 215 and move one step closer to once again facing flyweight kingpin Demetrious Johnson.

And he wants to use his upcoming fight at the brand new Little Caesars Arena as an opportunity to give back to the people of Santa Rosa affected by these ongoing, devastating fires.