Read on for early prelim results from Fight Night Phoenix...

A 2008 Olympic gold medalist in freestyle wrestling, UFC debutant Henry Cejudo didn’t need his ground game at all in early prelim action at US Airways Center in Phoenix on Saturday, as he displayed an excellent striking game in winning a shutout three-round unanimous decision over Dustin Kimura.

Scores were 30-27 across the board, for Cejudo, the third winner of Olympic gold to compete in the Octagon, joining fellow wrestlers Kevin Jackson and Mark Schultz.

Cejudo fought at a measured pace in the opening round and dominated the first five minutes with a stand-up attack punctuated by a knockdown midway through the frame. Kimura had few answers for his opponent, and now had an uphill climb heading into round two.

Nothing got better for the Hawaiian in the second or third stanzas, with cuts popping up over his left eye and under his right eye as Cejudo again picked away calmly with both hands, proving that he didn’t even need his wrestling game to win his first UFC bout. 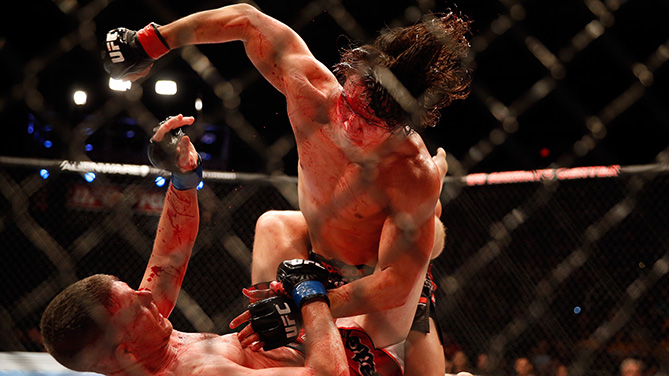 Glendale’s David Michaud picked up a victory in his lightweight debut, scoring a gritty three-round unanimous decision over Garett Whiteley.

The first round was competitive and fought mainly on the feet, with Michaud getting stronger as the frame wore on, as he bloodied Whitely, jarred him with a right hand and then scored with a late round takedown.

Michaud got a takedown early in the second, but Whiteley’s elbows from the bottom opened up a nasty cut over the Arizonan’s right eye, and he kept firing and landing them, even with Michaud in the top position.

Much of the third round was contested on the mat, with Michaud scoring the takedowns but Whiteley staying busy from his back. The ground control was enough for the judges, who rendered Michaud the victor. 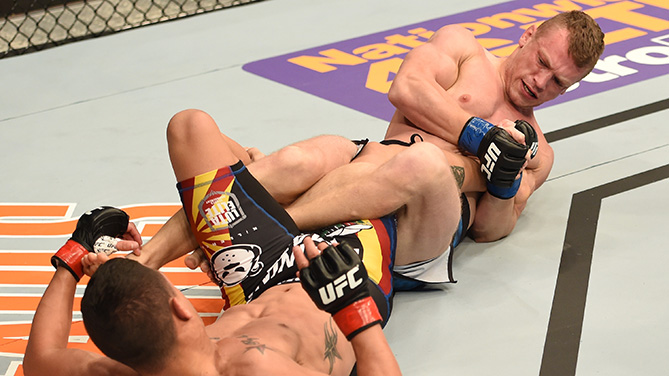 Arizona’s Anthony Birchak tried to kick off the card with a big win for the hometown crowd, but it was England’s Ian Entwistle who emerged victorious in the bantamweight opener, ending the bout via first-round submission.

Birchak (11-2) started fast, with a few strikes setting up a slick takedown. But once on the mat, that was Entwistle’s world, and he quickly locked up a heel hook. Birchak tried to punch, then roll, his way out of trouble, but it was too late, and he was forced to tap out at the 1:04 mark.

Due to a stomach ailment, Derek Brunson was pulled from his middleweight bout against Ed Herman.