Cejudo: DJ is human, anything can happen 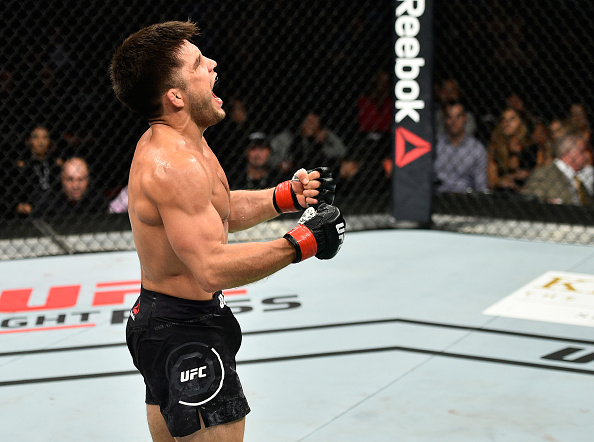 In April 2016, Henry Cejudo had it all figured out, and he was about to let UFC flyweight champion Demetrious Johnson know about it.

“My mindset was not only am I gonna beat this guy, but I’m just gonna drag him through the mud,” Cejudo said of his first meeting with Johnson at UFC 197 in Las Vegas. “I’m gonna show people my skills, my strength and my will. I’m gonna use it upon him.”

It didn’t play out like that on fight night, and in less than three minutes, Johnson had a TKO victory and his eighth successful title defense, and Cejudo had his first pro loss. It was a shock to the 2008 U.S. Olympic gold medal winner.

“I didn’t think Demetrious Johnson could do that to me,” Cejudo admits. “I really didn’t. And I got a rude awakening. (I thought) You’re good, you’re an athlete, you’re a great wrestler, but you’ve still got a lot to learn. So I went back to the drawing board, got rid of a lot of people immediately in my camp and in my life, and now I’m here today – ready, focused and excited to stop the ‘Mouse.’”

On Saturday in Los Angeles, Cejudo gets his second shot at “Mighty Mouse,” who has since gone on to successfully defend his title three more times, breaking Anderson Silva’s record and making a case for himself as the greatest MMA fighter of all-time. And Cejudo knows what he’s up against in the co-main event of UFC 227.

For the 31-year-old Arizonan, the reason why he didn’t emerge victorious the first time around comes down to one word: time.

In those three years, Cejudo went from Olympic hero to MMA rising star, roaring out to a 10-0 record that included four UFC victories. But Johnson, who has been too much for the entire 125-pound weight class, was too much for Cejudo that night. Ever since, Cejudo has thought of a rematch, and after a close loss to Joseph Benavidez and back-to-back wins over Wilson Reis and Sergio Pettis, he’s getting what he wanted.

“Never have I thought about a fighter like I thought about Demetrious,” he said. “There’s a bit of admiration for what he was able to do to me. And for what he was able to do to the other guys in those title defenses. It’s also an opportunity, it’s a motivator. This is Ronda Rousey-Holly Holm. This is going down like that. That’s the way I see it. I have the strength, the wrestling to neutralize whatever he’s doing, and I have the power to knock him out.”

But the main key to victory for “The Messenger” may be his mindset heading into STAPLES Center.

“It’s gonna be different because I know what to expect,” Cejudo said. “I watched too much film, I’ve been in the ring with him, and I understand Demetrious Johnson more. I understand his pedigree and the pressure that he’s going through too. There’s pros and cons to being the champ.”

Cejudo is eager to find out what those pros and cons are for himself, mainly because is he does, he will have fulfilled two of the three life goals he wrote out for himself when he was 17.

“Number three was being a UFC champ, number two was being an Olympic champ, and number one was to be the best husband, the best father, the best everything that I could be,” he said.

All he has to do is beat a champion that seems impossible to beat. But Cejudo likes his odds.

“We all bleed red,” he said. “He’s human just like me. And the beautiful thing about mixed martial arts is that anything can happen.”