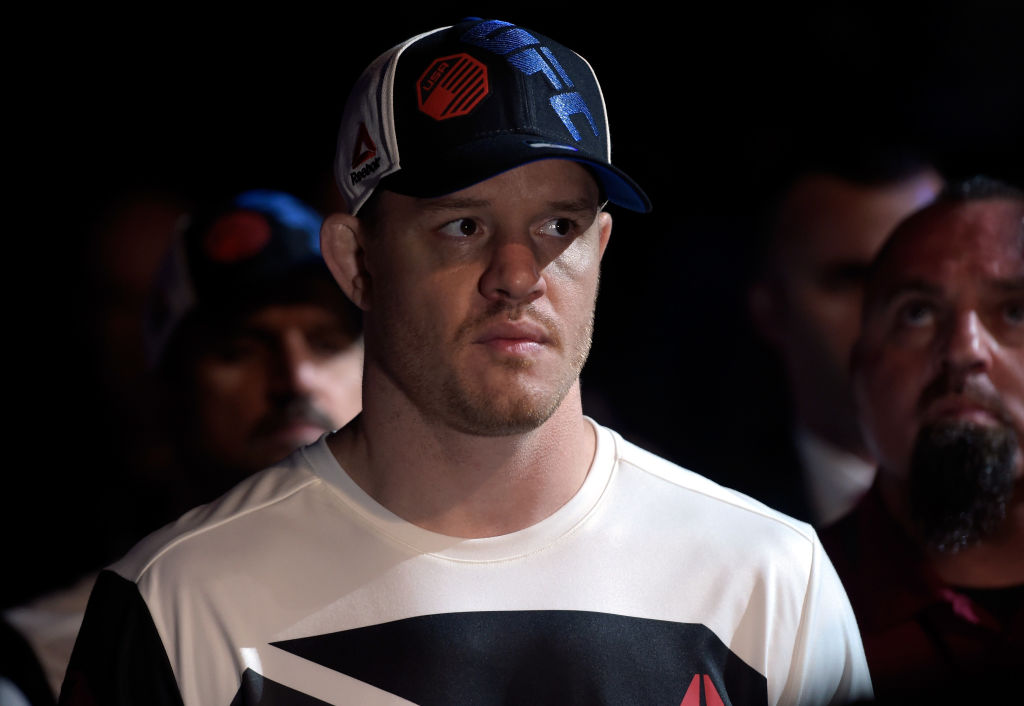 “The Doberman” sleeps in Moscow. CB Dollaway wasn’t sure that would be the case this week, as he went through opponent after opponent in the lead-up to this Saturday’s UFC Fight Night event.

But after nearly 12 years as a pro, Dollaway learned that it’s best to control what you can control, and let the rest figure itself out. So when he lost his original opponent, Omari Akhmedov, due to injury, and wasn’t sure if he would get a replacement, he left his Arizona home and went to the Grand Canyon.

“I told my agent if they do come up with something, just accept it,” said Dollaway, and when he came back from a couple days away, he had a fight with Artem Frolov.

“I got some good hiking in, kept my cardio up, cleared my head for a little bit, and here we go – off to Russia.”

That was a week ago, September 6, the day before Dollaway was leaving for Moscow and when he was about to find out that now Frolov was out as well. Told by the UFC that he would get a fight this weekend, he got on the plane. Soon after leaving Arizona, he had a fight against newcomer Khalid Murtazaliev.

Oh, what a long, strange trip it’s been, but a typical one given what Dollaway has been through the last couple years.

“It’s been a rollercoaster ride,” he laughs. “It’s just par for the course, I guess. It’s been a real weird last couple of years.”

Dollaway was scheduled to face Francimar Barroso at UFC 203 in September 2016. It was a chance to snap a three-fight losing streak in his home state of Ohio and get back on track. Then the day before the fight, an elevator malfunctioned, seriously injuring Dollaway’s back and forcing him from the Barroso bout.

He wouldn’t return to action until July 2017, when he decisioned Ed Herman. In March, Dollaway was back, and he had a solid first round against Hector Lombard until Lombard cracked him after the round ended. Lombard was disqualified, Dollaway got the win, but not the way he wanted it.

Yeah, it’s been a little weird. But now he’s back, with a two-fight winning streak and a chance to make it three this weekend. It’s not a bad place to be in for the 35-year-old middleweight veteran.

“I feel like things are on the up and up finally,” Dollaway said. “I had a lot of personal stuff I went through in the last couple years as well, like a divorce and other things. All that wrapped up and finished up within the last three months, so it’s like a breath of fresh air and a new start for me. It would be nice to get this third victory in a row, find myself right back in the middleweight rankings and go after a top guy and be back on course, hopefully, and work towards a title shot.”

Most importantly, Dollaway just wants to fight. That’s not surprising after what has amounted to a 12-week training camp for this bout.

“By the end of camp I’m ready to taper,” he laughs. “You can tell you’re just beat down and your body’s tired. You start to realize when you’re going into a training session that you’re getting tired from stuff you shouldn’t be getting tired from. That’s a pretty good sign. You’re not sleeping well, that’s another sign, and you’re welcoming the taper. You’re tired of seeing the gym, tired of sparring and fighting the same guys for the last ten weeks. So yeah, when taper time gets here, you start getting your body feeling good, your mind comes back and you start getting excited about the fight again. You’re just ready to fight. It doesn’t matter who.”

Suffice to say he wasn’t scouring YouTube for clips of Frolov or Murtazaliev.

“I’ve tested myself against some of the best guys in the world,” said Dollaway, who has faced the likes of Michael Bisping, Lyoto Machida and Mark Munoz over the course of his decade-long UFC run. “I know I can hang, and it’s a fight. We’re gonna get in there and fight. It’s what we do.”

Even if it’s in Russia, facing a Russian?

“I wanted to go to Russia,” he said. “When I saw they were going to have the first card in Moscow, sometimes when I see cool destinations, I’m like, ‘Hell yeah, I’d like to go fight there.’ I went down to Brazil and was fighting down there a little bit, Australia, Berlin – these are cool places I get excited about going to. It’s fun to go there and fight and enjoy the cities. It’s gonna be a cool experience fighting a hometown guy, and we’ll see how it compares to Brazil. The Brazilian fans have prepared me for any fans around the world.”

So has he found out the Russian translation of “Uh Vai Morrer?”

“I probably won’t look it up until after,” he laughs. “You don’t want to know what they’re saying until after.”