“You can take all the wrestling credentials and throw them out the window. It is a whole different game once you start throwing punches." 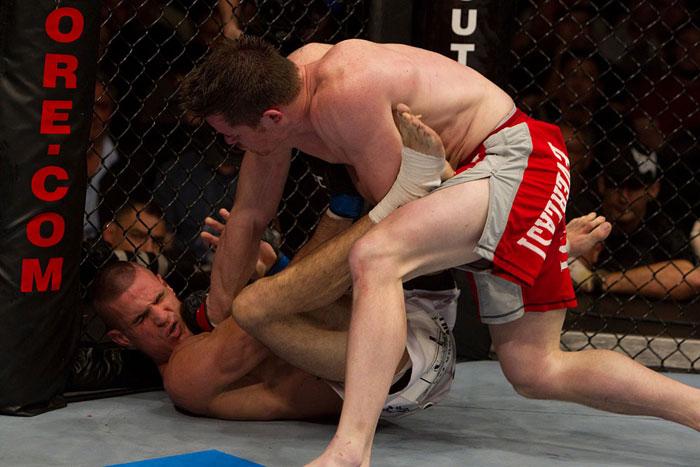 These are not the words or tone one expects to hear from a recipient of a much coveted “Submission of the Night” bonus. Gloating and outright cockiness, maybe? But UFC middleweight CB Dollaway is fairly humble and transparent with his thoughts concerning his own career in and out of the Octagon. And why shouldn’t he be? Dollaway won the fight, it’s not his first time receiving a “Submission of the Night” award, and he’s having a good time in the UFC nowadays.

The 27 year old Arizona State University graduate is an open book about his most recent victory in the Octagon over Canadian Joe Doerksen.

“I kind of planned on him not being able to take me down,” he divulges, which isn’t just bragging because Dollaway is a Division I All-American wrestler. The early takedown attempt by Doerksen was simply not a part of his expectation of the cagey veteran. “I didn't figure he would even go for many takedowns. I thought we would kind of stand and trade and test out the waters on our feet, but the first chance he got he went for the takedown.”

It is not too difficult to recall that UFC 119 bout blow-for-blow, because the fight ending choke was secured just over two minutes into the first round. “I knew that if it did hit the ground, I'm as dangerous there as he is, so when it went there I saw an opportunity and went for it,” asserts Dollaway about latching a guillotine choke on the savvy Doerksen, who has earned an impressive 33 of his 46 victories by submission. “That fight showed that I'm very dangerous off my back too. I'm very confident in my submission game.”

Overall, it was a short night for “The Doberman”. Doerksen got the takedown and Dollaway wrapped his neck for the guillotine, but did not have it immediately and the two sat in a stalemate for a minute. “I was staying relaxed because I knew I had him in a little bit of trouble, but I couldn't finish it from there,” says Dollaway, whose patience in the cage paid off and then some. “I was just looking to sweep him and take top position. I knew I had 15 minutes in a fight, so I was in no rush to do anything and get everything adjusted to make my move. All it takes is one mistake to end any fight.”

Dollaway’s opponent, known as “El Dirte”, made his move and the pair executed a series of somersaults, with Doerksen trying to escape the choke and Dollaway relentless in chasing for the finish. After a few rolls, Doerksen tapped and Dollaway was now 12-3 with a standing ovation from the Indianapolis crowd for the quick win. A couple hours later, Dollaway was also $70,000 richer with the submission bonus, “It makes me feel a little bit more secure and focus more on fighting and not having to worry about money. Just put that in the bank and have a little security there.”

“The Doberman” is licking his chops on a three fight win streak dating back to September of 2009 and is ready to take on another Division I All-American wrestling convert: Mark Munoz. On March 3rd, Dollaway will be looking for his sixth UFC win against Munoz and a little payback for his fight team. At UFC 123, “The Filipino Wrecking Machine” won a unanimous decision over Dollaway’s friend and training partner Aaron Simpson.

“We definitely broke him down a lot for Aaron's fight,” says Dollaway, noting that this will be his second time around analyzing Munoz for tendencies and weaknesses. But the videotape is far from gospel. “I feel like I've studied for him twice, but I'm expecting a different fighter. Like me, I'm betting he gets better every time he steps into the cage, so you can't simply go off their last performance. You have to expect they're going to get better, expect new things out of him and just expect a better Mark Munoz.”

As for The Ultimate Fighter season 7 runner-up’s opinion on Munoz’s showing against Simpson, “I thought he did a great job.” The Oklahoma State University alum out hustled his opponent that night, thus improving his record to 4-2 in the UFC. “He kept a lot of pressure on Aaron and kept coming forward. He stayed aggressive and it paid off for him.”

The match-up is excellent. Great wrestling backgrounds, comfortable strikers, similar amount of fights for the UFC, mostly wins, and a pair of losses each. “It is definitely the type of opponent I'm looking for,” affirms Dollaway who is more than satisfied with the potential this fight has and what a win over Munoz would mean to his career. “He just lost a split decision to Yushin Okami who should be fighting for the world title. He's definitely right up there and a win over him would be huge for my career.”

One can never guess how a fight will play out, but Dollaway assures this won’t be a wrestling match because it simply isn’t. “If this was a wrestling match it would be a different story, but it's a fight,” remarks Dollaway, making it clear that just because someone has success in college wrestling doesn’t mean that will translate to MMA. “You can take all the wrestling credentials and throw them out the window. It is a whole different game once you start throwing punches. I've seen guys with great wrestling credentials get taken down by guys who don't have any.”

Besides the win streak, “The Doberman” is at an all-time high confidence wise because he is coming off a great training camp. Even better, it was a smooth and uneventful one. Dollaway has been a man without a gym for the better part of a year after leaving Arizona Combat Sports with Ryan Bader and Aaron Simpson. They had plans to start their own gym. In the mean time, they were forced to train almost solely in the Arizona State University wrestling room because other gyms would not take them in knowing they were breaking ground on a gym. But now their gym is open and they have a home to call their own at Power MMA & Fitness in Gilbert, Arizona.

“We've been in our own gym this whole training camp. We haven't had to hop around to different gyms like in the Doerksen fight. That experience was a nightmare. But we found a way to fight through the adversity and got the job done. It's definitely been nice to have a spot to go to every day and no worries about somebody telling us when we can train. We could just get down to business and focus on the fight.”

“The Doberman” sounds happy and secure with his place in the UFC and even more so with his preparation for his opponent. “It is easy to train for Mark because we have a lot of guys like him; Aaron is almost a mirror image of Mark,” said Dollaway, who explains that Simpson and Munoz throw a lot of the same punches and have a takedown heavy offense. “It has been great having Aaron here and having all the other D-1 wrestlers coming in to work out with me. They provide great training partners. Every day you go in and you know you are going to get good work.”

The new gym has been busier than Grand Central Station with UFC stars from past and present. “Robbie Lawler is with us full time now, Kyle Kingsbury was down doing some of his camp here, and DaMarques Johnson was here.” For Dollaway, these new looks and new techniques make training more exciting than ever. “It reminds of the days when we were at Arizona State training with your teammates and friends. It's awesome.”

On March 3rd, live on Versus, a wholly focused and ever improving CB Dollaway will be ready and waiting to take on his next challenger: Mark Munoz. As Mike Tyson once said, “There's nothing more deadly or more proficient than a happy fighter.” Hopefully, Munoz is equally as prepared as his opponent, because with a new gym, a three fight win streak, dangerous submissions, more confidence in his stand-up, and his wrestling pedigree, “The Doberman” is fighting happy.