"I believe I’m one finish or one Fight of the Night performance away from taking that next step." - CB Dollaway 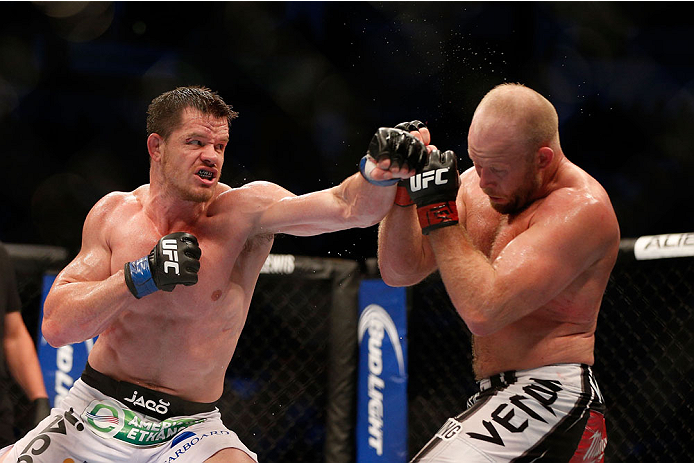 Competing in Brazil as a foreign fighter can be a daunting and complex experience. While establishing supremacy over another well-versed athlete inside the Octagon is a rigorous task in its own right, doing so in a raucous sea of fight-frenzied Brazilian fans creates an interesting environment. Where American audiences are prone to showing up when the biggest names on the card set about their work, the Brazilian fan base is there at the opening bell of the first fight of the night, and their blood is pumping red hot and eager for action.

These surroundings are precisely the intangible measures that can get inside a fighter’s mind and become the catalyst for the “psyche out” effect so many athletes traveling to Brazil for competition have fallen victim to. No amount of training can prepare an athlete to handle the emotions of fighting in a hostile environment and the pressure has been known to break foreigners before they ever step foot inside the cage.

While CB Dollaway acknowledges the unique atmosphere that comes with fighting on a UFC card in Brazil, he is one of the few who has not only publicly embraced the experience, but has relished it as well. The Power MMA fighter will now make his second trip in 14 months to the country largely considered to be the birthplace of the sport.

The former Arizona State University wrestling standout derailed highly touted prospect Daniel Sarafian via split decision in his first showing in Brazil, and the Michigan native will be charged with another difficult task on his next voyage to South America, as “The Doberman” will face The Ultimate Fighter Brazil 1 winner Cezar Ferreira this Sunday night at UFC Fight Night: Shogun vs. Henderson 2.

“I couldn’t be more excited, to tell you the truth,” Dollaway said. “The Brazilian fans really get into the fight. They may all be against me but it’s still awesome. The level of emotion they show during the fights is something you’re not going to get in Las Vegas or anywhere else in America. I can’t put into words what it was like standing in the middle of the Octagon after I won that split decision over Sarafian and how loud it was in that building. I’ve never experienced anything like that in my life and I doubt many people will ever experience anything like that in their lives either. It’s something I’ll never forget and it was a life-changing experience.

“I love fighting there and I would jump at the chance anytime the UFC offers. I’ll go to Brazil to fight any time and the fans are amazing. They make it worth it to do what we do. They make you want to go out there and put on a show because you hear how much they get into it and you can feel it.

“To have 10,000 people chanting “You’re gonna die” is awesome….especially to walk away with a victory. It was a great experience all around and I’m looking to go down there and put on another great fight for them. I’m going to get after it because that is what they love and want to see.”

When Dollaway steps into the Octagon to face the undefeated Brazilian prospect, he will also be looking to reignite his momentum in the middleweight division. The season eight TUF alum had put together back-to-back victories before coming out on the losing end of a controversial split decision loss to powerhouse Tim Boetsch at UFC 166 in Houston. Where suffering a loss of any variety is a difficult turn for a fighter, the defeat in Houston stung Dollaway to the core. He believes he did everything he needed to do to win the fight and was shocked by the judges’ decision.

“That was probably the hardest loss I’ve ever taken as far as the setback,” Dollaway recalled. “Instead of being on a three-fight winning streak and going for a fourth straight, moving closer to a top 10 position, I had this setback and it was huge. I’m 30 years old and I don’t know how many more years I have this sport. That loss really just sucked and it stopped my momentum for the time being. Obviously I’m going to come back and fight my ass off and try to get back on a win streak. I’m going to work myself into the top 10 and get some of the bigger named opponents, but I lost some steam because of that outcome. It was a huge letdown because I did everything in my power to win and I thought I had the fight. That’s how it goes sometimes. In this next fight I’m coming out for that finish and I’m not going to leave it in the judges’ hands.”

With his next fight approaching and his days on The Ultimate Fighter a distant memory, Dollaway is working diligently to take the next big step in his career. The 30-year-old Arizona transplant has worked through physical injuries, untimely setbacks inside the cage, and persevered to hold his own in a highly-competitive division.

Nevertheless, Dollaway believes the time has arrived for him to make a run at the next tier of the 185-pound fold, and that push will start by defeating Ferreira.

“I’ve worked very hard to become a well-rounded mixed martial artist and I’m going to mix things up in there with him. This is my 13th fight in the UFC and I’ve reached a point in my career where I’m very comfortable in the cage. I’ve dealt with some injuries over the past years and I’m 100% healthy right now. It’s the best I’ve felt in three years and I’m excited to test drive the new body, so to speak. I’ve been through a lot, but I hung around, toughed it out and made it through. I’m feeling good now and I’m ready to make a big push toward that top 10. I feel it’s my time and I’m coming into my prime.

“I want to be in the big fights. I want to be on the pay-per-view cards, and to get there I have to put on strong performances. This is a defining moment for me. I’m going down there to stop Cezar Ferreira. There is no beating around the bush. I need to go out there, look impressive and finish him. I believe that’s what I need to get the type of recognition I’m looking for. I believe I’m one finish or one Fight of the Night performance away from taking that next step.”