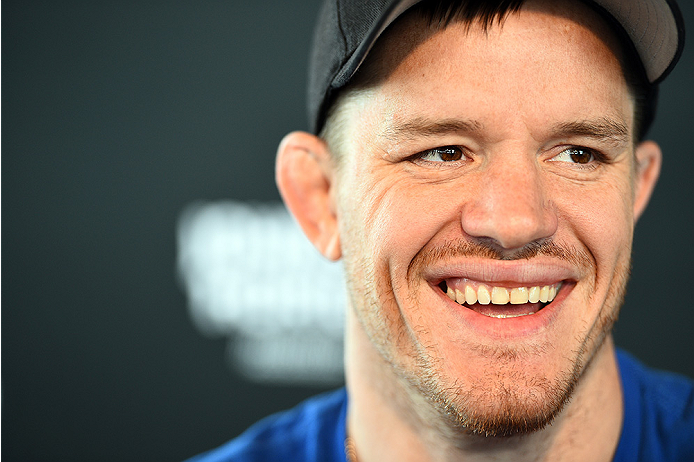 CB Dollaway never saw it coming. That’s okay, no one else saw the kick to the midsection that effectively ended his December 2014 bout against Lyoto Machida coming either, save the man who threw it.

“It was a perfect shot,” Dollaway said. “If he (Machida) is an inch the other way, he catches my elbow and breaks his foot. But I’m sure he trained it. It’s Machida, that’s what he does. I actually thought he was going high and was going to try and kick me in the head. After I tried to kick him in the head, he kinda gave me that look like ‘all right.’ I was expecting him to come after my head and I thought I had my body covered, but he found a little gap in there and snuck it in and caught me right in the perfect spot.”

That’s the beauty and the curse of the fight game. One shot can change everything, and while that’s great for the one landing that shot, it’s not so great for the one receiving it. And for the record, Dollaway was never one of those guys watching a body shot knockout and saying “nah, that can never happen to me.”

“The only time I’ve ever been put down in sparring was from a body shot, so I know,” he said. “I’d rather get punched in the head than get hit with a good body shot when you’re trying to breathe. They catch you at the right time, and there’s nothing you can do. You can’t recover from it.”

The loss against Machida was Dollaway’s first since a controversial decision defeat at the hands of Tim Boetsch in October of 2013, and first stoppage loss since 2011. After that setback against Jared Hamman, Dollaway turned the corner and went from prospect to contender, winning four of five before running into “The Dragon.” It wasn’t the way Dollaway saw things going, and after the fight in Barueri, Brazil, he wondered what direction his career would take.

“I didn’t know what was gonna happen for sure, but like a lot people say, it was Machida and he’s done it to a lot of top guys,” Dollaway said. “He’s a legend in the sport, he’s been around forever, he’s won a world title, so if anyone gets caught with that shot, there’s nothing you can really do. So I’m just glad to get the opportunity to go out and prove my worth again.”

That opportunity comes this Saturday night in Montreal, and as he faces fellow 185-pound contender Michael Bisping on the UFC 186 main card, it’s clear that his stock hasn’t fallen. From here on out, it’s only big fights for “The Doberman,” who learned how to deal with such a lofty place in the middleweight hierarchy in the lead-up to the Machida bout.

“Being a main event is much different with media obligations, and just a lot more stuff goes along with being the main event,” he said. “It gave me a lot more respect for the champions, those guys that have to do that all time, flying around everywhere and still finding time to train and be the best in the world. There’s a lot more that goes with this fight game the higher you go, and that’s something I’ll figure out. You just have to plan around it and it’s experience. Machida’s done it a lot more than me, he’s been through it, but now I know what to do and I think it will pay off.”

For Bisping, this kind of stuff is old hat, and few handle it better. He’s been in the UFC spotlight since winning The Ultimate Fighter in 2006, and he’s comfortable in the eye of the storm. Dollaway, a finalist on TUF in 2008, is still getting used to it, but what keeps him on track is knowing that when the Octagon door closes, none of those other distractions matter.

“Basically, everyone’s a man,” he said. “Everybody’s beatable and you just gotta get in there and you gotta fight. There’s no reason to be nervous. You go out and do what you’re gonna do, and don’t let anything get to you like the crowd and the trash talk. Just go out and fight and do what you do.”

And don’t worry about tomorrow, because today will determine the future for you.

“I think I got too caught up in what could come from it,” Dollaway said of the Machida fight. “I thought ‘If I could beat him, maybe it’s a title shot or maybe I’m one more win away. I’ve got to win this fight.’ So you put all that pressure on and I forgot why I do this. I got away from going out there loose and having fun with it and putting on a show. I got wrapped up in the other stuff, and this fight with Bisping I just want to go out and be loose, be myself and have a little fun out there and not put all this pressure on what this fight could bring.”

Arizona’s Dollaway, 31, has been noticeably loose on fight week in Montreal, giving as good as he gets with the always loquacious “Count” of Manchester, England. That’s a good sign for his chances, and though Bisping’s performances have been erratic since returning from eye surgery in 2014, Dollaway’s not about to sleep on the perennial contender.

“I’m training for the best Michael Bisping there is, because you never know what’s going on in a guy’s life,” he said. “Maybe his eye wasn’t where it should have been for those fights (in 2014). Maybe he wasn’t all the way healed up and maybe now he’s doing better. I saw him saying that everything’s on point and he’s feeling good, which every fighter says every time, so it means nothing (Laughs), but I’m going to prepare for the best Michael Bisping because you don’t want to come out unprepared against that guy.”

Unprepared? That’s a word absent from CB Dollaway’s fighting vocabulary now and for the rest of his career.