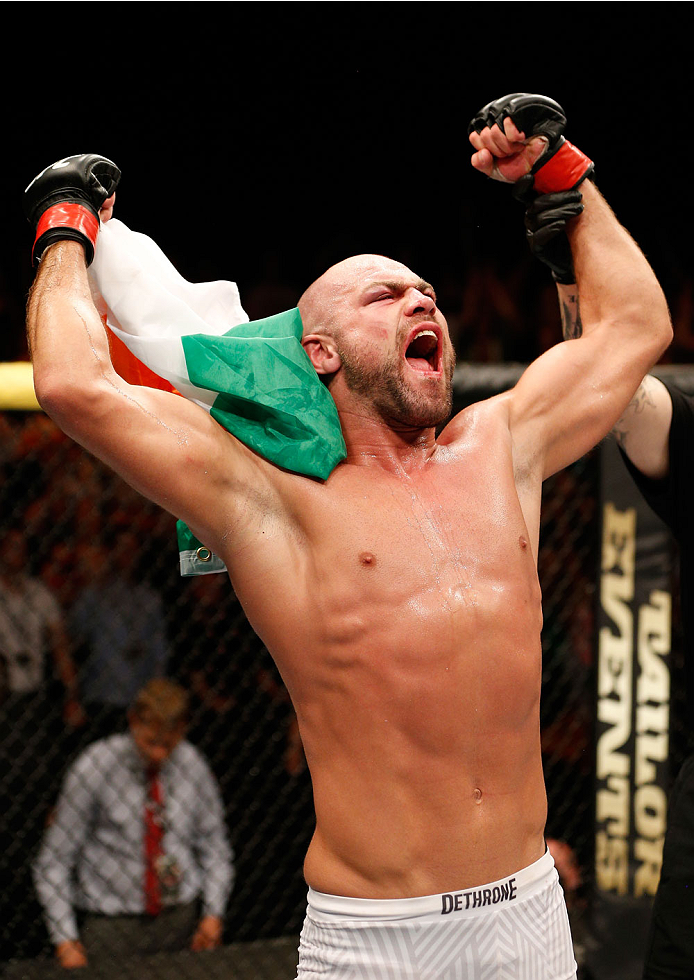 As far as his mixed martial arts career is concerned, Cathal Pendred – or anyone else for that matter – doesn’t have to think too long when picking out THE highlight.

“It has to be my debut,” Pendred, who retired Wednesday at the age of 28, said. “It was in Dublin on the night of the clean sweep for my team. Conor (McGregor) was the main event, he won against (Diego) Brandao. Gunni (Gunnar Nelson) fought, he won. Paddy Holohan was the first fight of the night and he won. And my fight in particular, the first round I was on the bad side of a good old fashioned beatdown, and then I turned it around in the second round and choked out my opponent. I got Fight of the Night honors, (UFC President) Dana White was jumping up and down afterwards in absolute amazement, saying it was the best comeback he had ever seen. Then a few weeks later, it materialized that my opponent had been on PEDs. So not only had I beaten a guy in a weight class above my usual one, I also beat a guy who had been on PEDs. All in all, it was just incredible, and I’ll definitely look back on that being the highlight of my career.”

Pendred’s second-round submission win over his Ultimate Fighter 19 castmate Mike King on July 19, 2014 was as epic as everyone says it was. To have it in his hometown of Dublin made it that much better, and with that win, he began a six-fight UFC run that resulted in a 4-2 record and helped introduce Irish MMA to the masses.

But even before his October 24 loss to Tom Breese, which left him with a 17-5-1 record, SBG Ireland’s Pendred wasn’t feeling the same way he always had before his fights.

“Before, I was going to the gym because I wanted to and I loved to, and it just felt recently that I was doing it because I had to and because it was my job,” he said. “I was proud to say I did what I loved for a living and because of that I didn’t feel like I was working or had a job. But it started to feel like that, started to feel like I was doing it because I had to get paid. It was work. So those feelings were in my head before my last fight.”

A month after the Breese bout, the dust had settled, and Pendred was feeling the same way. So he pulled the trigger and moved on to the next phase of his life.

“What drove me to get to where I am was this burning desire and passion inside of me for the sport and just competing,” he said. “And it’s somewhat dwindled in the last few months and other things have taken up my focus. I had these thoughts in my head and I had been thinking about it for a while, and the bottom line was, if you’re even thinking about it, I suppose that’s the time to get out.”

Most aren’t that wise, opting to keep fighting, hoping that the fire will return or that experience will allow them to get through the toughest game in the world. It never works. Pendred knew it, and he has no regrets.

“I got to the UFC, the UFC is the top of the sport, I did well, I have a degree behind me and I made a fair amount of money,” he said. “I fought six times in 15 months so I earned some good money from that, plus I got the 100 grand bonus in my first fight. I put that all away, I’ve got some business plans developing, and I just decided it was time for the next chapter and new challenges.”

If Pendred leaving the sport in his prime because his heart wasn’t in it anymore isn’t admirable enough, knowing that he took the bonus from the King fight and put it right in the bank is worthy of kudos as well. So no tigers for the backyard or six sports cars in the driveway for him.

“My plan was always to get into business, and you need money to make money, so I always put my money away. I know an athletic career is a short one, and I was thinking ahead.”

Pendred isn’t waiting to get started either.

“My first business is getting set up now,” he said. “There’s a chain of salad bars around Dublin that are very popular. They’re called “Chopped,” and I’ve become a franchisee and I’m opening up one down at the City Centre, which I’m looking forward to. Something I’ve always tried to promote while coming up and being in the limelight in my fighting career was healthy eating and clean living. It’s something I believe in. It’s the perfect fit for me, and selling something I believe in is the most important thing.”

Maybe not important as knowing when to say “when.” Cathal Pendred had a fighting career to be proud of, but the best may be yet to come.

“I’ve got a clean bill of health, other than some minor injuries here and there, nothing too serious. So I’ll just get out while I’m ahead and take on some new challenges.”