"I’m used to having good Irish crowds behind me, but nothing like that.
I’ve never had goosebumps. Usually my focus is so strong that the crowd
doesn’t affect me, but I felt that." - Cathal Pendred 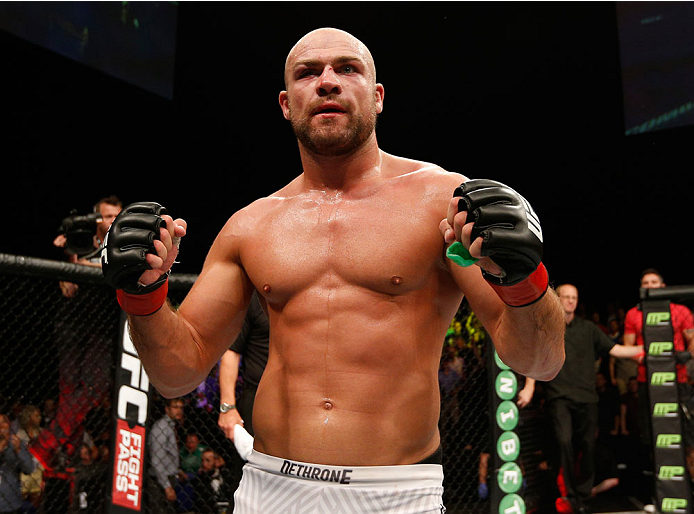 “There’s not many things in life that are perfect, but that pretty much was the perfect debut,” says Cathal Pendred, shortly after winning his UFC debut in dramatic, come-from-behind fashion in front of a rabid crowd inside the O2 Arena in Dublin.

The Irishman’s journey to the Octagon against Mike King on July 19 was a long time coming – a dream that began when the former rugby player stood in the crowd at the same venue five years earlier, a month prior to making his MMA debut, and that eventually led to “The Punisher” auditioning for Season 19 of The Ultimate Fighter in hopes of making his UFC ambitions come true.

For nearly a year he had to keep quiet, first about successfully making it into the house, then about his progress during the pre-taped reality TV competition and ultimately about where and when he would make his long-awaited debut. There was a time where it looked like he’d miss out on the opportunity to fight in Dublin – a concern we discussed prior to his maiden trip into the UFC cage – but the stars aligned and Pendred was able to join his SBG Ireland teammates Patrick Holohan, Gunni Nelson, and Conor McGregor on the highly-anticipated card in his hometown.

“It actually only hit me a couple days ago,” he admits, reflecting on the whirlwind of excitement and emotion that surrounded his debut victory. “I literally wasn’t left alone for a few days, and it wasn’t until Wednesday or Thursday I was sat at home in my apartment – my girlfriend was out and I was left alone to my thoughts and I thought about it.

“I was like, `Holy s**t – I just did it! I just made my UFC debut in my hometown, it was an absolutely crazy, unbelievable fight.’ Everything just sunk in. I nearly got a bit emotional just thinking about it.”

The crowd in Dublin that night was one of the best - if not the best – in UFC history. The venue was packed from the outset and they popped hard as Holohan, an underdog Irish flyweight, started the night off with an upset win over Josh Sampo. Though the cheers continued throughout the evening, the roof nearly came off the place whenever one of the hometown boys made their way to the cage.

Having fought at home in the past during his time on the regional circuit, Pendred thought he was prepared for the crush of noise that would greet him as he strode through the curtains and down the walkway, but when his music hit, the crowd erupted and a man that usually maintains a steely focus was forced to check his emotions and remind himself of the task at hand.

“The specific song I chose was from the 1990 World Cup when Ireland completely exceeded expectations,” he says, explaining that the song, “Put ‘Em Under Pressure,” played throughout the year in the build up to that year’s tournament in Italy. “The amount of people that are saying it was the highlight of the night – I would love to know what the decibel meter was when that song came on because they really did go nuts.

“I did a lot of preparing myself for that moment with my sports psychologist, doing a lot of visualization, but to be honest with you, nothing could have prepared me for that. I’ve never felt so much energy before in my life. The roar of the crowd, singing of the `Ole! Ole! Ole!’ – the hairs on the back of my neck were standing up walking out to the Octagon.

“I’m used to having good Irish crowds behind me, but nothing like that. I’ve never had goosebumps. Usually my focus is so strong that the crowd doesn’t affect me, but I felt that. I remember getting into the Octagon – I enjoyed the walk down, but I said to myself that I better get my stuff together.”

Early in the opening round, it looked as if Pendred’s fairytale moment was going to have an unhappy ending, as the natural welterweight was a little too aggressive out of the gate, allowing King to connect with a big shot that put the hometown favorite on the canvas. As his fellow Team Penn member swarmed, Pendred did his best to stay active and avoid damage, but he couldn’t shake free of King and mount any kind of offense.

He kept moving, but every turn led to another dangerous position. He ate punches and elbows from overhead, eventually giving up his back and being forced to defend a rear naked choke. Through it all, the crowd never fell silent, cheering their charge on as he went into full defensive mode, determined to survive the round and get a chance to regroup before the start of the second.

With referee Marc Goddard keeping a close eye on the situation, Pendred managed to make it to the horn and escape the first round, coming away from the opening five minutes.

As the second began, it was clear that King was tired and Pendred took full advantage, pressing the action with a little more control than he did to start the first. Midway through the frame, as the fight moved to the mat, he slipped around to the 30-year-old Ohio native’s back, fished his forearm under his chin and started to squeeze, using a palm-to-palm grip to put King to sleep with a rear naked choke and earn the victory.

“I’m delighted with the outcome, but I’m not delighted with getting my ass kicked for a round,” laughs Pendred, who earned a $50,000 Performance of the Night bonus for his efforts. “It worked out great because it was an entertaining fight and I got the bonus because of that, but I don’t want that to be the way my career goes. I don’t want to be going out and losing first rounds and coming back.

“The whole time I was in bad situations I was thinking to myself, `You can get back.’ He was on top of me throwing strikes and I was thinking, `Get back to your feet. You’re good. Get back and turn it around.’ At no point did I say to myself that I was done.

“I think what happens to fighters sometimes is they get put in a bad position and they say, `I’m done here.’ They might just stop moving and cover up and they’re waiting for the referee to stop it. They might give an argument for their own ego, but they wanted out. I just kept moving. I knew that if I kept moving, I would get out of there and that’s what happened.”

Everything afterward was a bit of a blur – a mix of adrenalin and the energy produced by the ravenous crowd carrying him through his post-fight celebration and interview, as well as a backstage encounter with UFC President Dana White.

“I was just feeding from the energy of the crowd,” admits Pendred, who pushed his record to 14-3-1 with the victory. “When I stood up and the crowd went nuts, I was pretty wrecked. The energy I was getting from that crowd is what got me jumping up and down, climbing on the Octagon, flying my flag, giving my speech. All that energy came from the crowd because I was wrecked – I was exhausted.

“Dana White came running up to me back stage, jumping up and down - `How the f*** did you do that?!’ – and that didn’t even sink in until Wednesday. All this was going on and it was just so surreal. Dana was jumping around all over the place. I’ve never seen him so happy; it was nuts.

“I didn’t know what to say to him,” adds Pendred with a laugh.

With his first win under his belt and the haze of his debut starting to dissipate, the UFC newcomer is eager to start preparing for his sophomore appearance in the Octagon.

Though he competed as a middleweight throughout The Ultimate Fighter and opposite King, Pendred has made it clear that his future rests in the treacherous welterweight division. Unlike his boisterous featherweight teammate, the soft-spoken 170-pound hopeful has no intention of calling anyone out – at least not yet.

“The welterweight division is the most stacked division in the UFC,” he offers. “There are guys I’d like to fight along the way as I start moving up the ranks, but for the first one, I’m just sitting tight and waiting to see what the UFC does.

Though making a quick turnaround alongside McGregor – who has been booked to faced Dustin Poirier at UFC 178 in Las Vegas on September 27 – would be an opportunity he’d welcome, Pendred believes a more realistic target is the October 4 UFC Fight Night event at the Ericsson Globe Arena in Stockholm, Sweden.

“I know Conor’s after getting a pretty quick turnaround at nine weeks and I’m the type of fighter that likes to stay busy, so I’m looking to get going pretty soon. The Vegas card with Conor on it would be great, but there’s a show in Sweden on October 4 – they usually keep the European guys on the European shows for their first couple fights.

“I know the Irish would be able to get to Sweden, so getting on that card would be something I’d really like and I think it’s quite likely.”

Regardless of when his next fight comes or how the remainder of his UFC career plays out, Pendred was able to fulfill a long-time dream in memorable fashion and it’s something that will stick with him for the rest of his career.

“It’s hard to explain how it feels to picture something in your head for so long. Making my UFC debut was one thing I always visualized, but since the time I was in the O2 in 2009, I’d envisioned making my debut there – it was just something in my head. As I got on towards my career, inevitably I was just waiting for the call and I was going to fight wherever it came, so it wasn’t so much about fighting at home, but that was the dream scenario.

“For that to come about and the fight to go the way it did, the crowd to be the way they were,” he pauses, searching for words that will do his feelings justice. “In terms of entertaining everyone, impressing my bosses – the bonus obviously changed my life. I’ve been struggling for the last year or so just trying to get to this point, so with all those things on board, I can’t explain to you.

“For so long, I had this dream and ambition to get somewhere – and don’t get me wrong, just getting there wasn’t the only ambition, but I knew things would get easier once I got there – so to have all those worries taken off me now feels like a weight has been lifted off me and it feels amazing.”