"My coach John Kavanagh tells me the two things he can never teach or give his fighters are heart and determination. You either have it or you don’t. And he says I’m very fortunate to have both in abundance." - Cathal Pendred 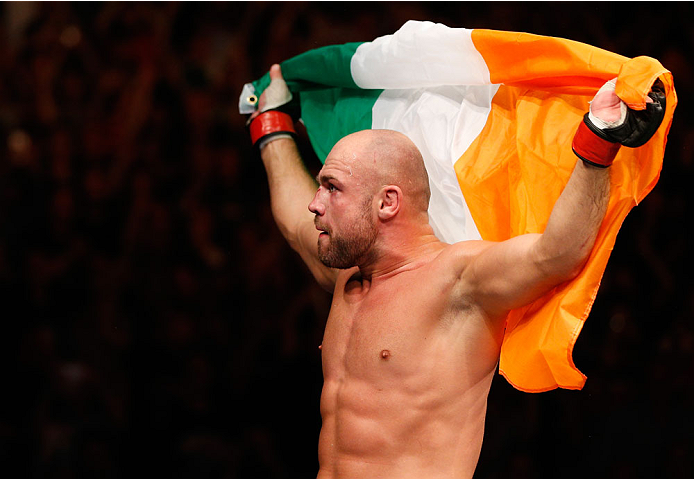 Heart is a difficult attribute to measure in the fight game. However, it doesn’t take scientific instruments or scales to know that Cathal Pendred has a ton of it.

The Irish powerhouse is pure grit and determination when it’s time to go to work, and when those elements are combined with a well-rounded skill set, he has all the tools necessary to make a lasting career under the UFC banner. Yet, his journey through the talent-filled ranks of the welterweight division is just beginning, and every progressive step will come with difficult challenges obstructing his passage.

Nevertheless, Pendred knows a thing or two about rough starts that give way to spectacular finishes. The 27-year-old SBG Ireland representative may be in the early stages of a promising career, but he’s already proven on numerous occasions that counting him out is a grievous error in judgment.

If there is air in his lungs then Pendred is giving all he has to the bitter end. That is a quality special fighters have in large supply and there is absolutely zero quit in Ireland’s “Comeback Kid.”

“You see it all the time within MMA,” Pendred said. “There are those who are great when things are going their way, but then they hit a rough patch and they wilt. I have always been the type of person that doesn’t let things not going my way affect me negatively. If you look back at my fight with (Mike) King, you will see me in many positions you have seen others fighters in before and they just call it quits. They just cover up and wait for the referee to stop the fight. I didn’t do that. Whenever he was on top hitting me, I kept moving and trying to improve my position. I ate more shots because of it, but I eventually improved my position.

“My coach John Kavanagh tells me the two things he can never teach or give his fighters are heart and determination. You either have it or you don’t. And he says I’m very fortunate to have both in abundance.”

Putting away a man who is willing to go to the edge and beyond is a monumental task, and Mike King discovered this truth at UFC Dublin back in July. The Ultimate Fighter 19 housemates went at it from the opening bell and it didn’t take long for King to take control. He dropped Pendred in the early going, then spent the rest of the first round expending all of his energy to finish the Irishman off.

That said, Pendred knows how to dig deep into his reserves and that’s precisely what he did in the second frame. After King scored a takedown early in the round, the Dublin-based fighter reversed position and locked in a fight-ending rear naked choke. While it wasn’t the start he was looking for, it is the finish that matters, and Pendred gave the raucous Dublin crowd the display of vigor and national pride they were there to see.

“It felt amazing to get that win,” Pendred said. “I have been asked many times since then how it felt and I have found it very difficult to put into words. Since I began training I envisioned myself becoming the UFC champion and I strove very hard to get my foot in the door with the UFC so that I could take the necessary steps to achieve that goal.

“However, it took much longer than I had expected to become a UFC fighter. To finally have made my UFC debut after years of chasing and visualizing it, and then for it to be in my hometown on a historic night with the loudest and most memorable crowd in UFC history made it something special and incomparable to anything I had every experienced before. But then you have to add in the equation how the fight went for me. I made some silly mistakes early in the first round, and as a result I spent nearly five minutes being rag-dolled, beaten, and choked to where the referee was close to stopping the fight. To have been so close to defeat in this fight and coming back from that to finish the fight in the way that I did in front of my home crowd made it the greatest and proudest moment of my life up to this point.

“On top of all this, I walked backstage and had (UFC President) Dana White literally run up to me, grab me, and start jumping up and down in excitement of how the fight unfolded,” he added. “Impressing Dana like that and receiving Fight of the Night honors…that was just the icing on top.”

While his time on TUF and his first official showing inside the Octagon came as a middleweight, Pendred is excited to finally be making his welterweight debut under the UFC banner. The Boston-born fighter went up a weight class because TUF was a sure-fire ticket to the sport’s biggest stage, but he certainly feels at his most dangerous when competing at the 170-pound limit.

He will look to put another impressive addition on his resume when he squares off with Gasan Umalatov at Fight Night: Nelson vs. Story in Stockholm on October 4. Pendred has every intention of showing the UFC fan base just how dynamic he can be when competing at his preferred weight, and that showing will come at the expense of the “Cobra” on Saturday night.

“I’m making my UFC debut in MY division,” Pendred said. “This is where I belong and where my future is. I want to make a statement in this fight that I am a serious contender within the division. And as great as the circumstances were resulting from the type of fight I had in Dublin, I wasn’t happy with the performance. So I want to rectify that in this fight.

“[Umalatov] seems to favor grappling; however, he is quite well-rounded. I’m not thinking of this fight in terms of the type of stylistic matchup though. I am just thinking and focusing on putting on a very impressive performance and making a statement.”