"He’s a good fighter and a tough fighter, but he’s not as good as me and
he’s not as tough as me. I know that I’m going to come out on top." - Cathal Pendred 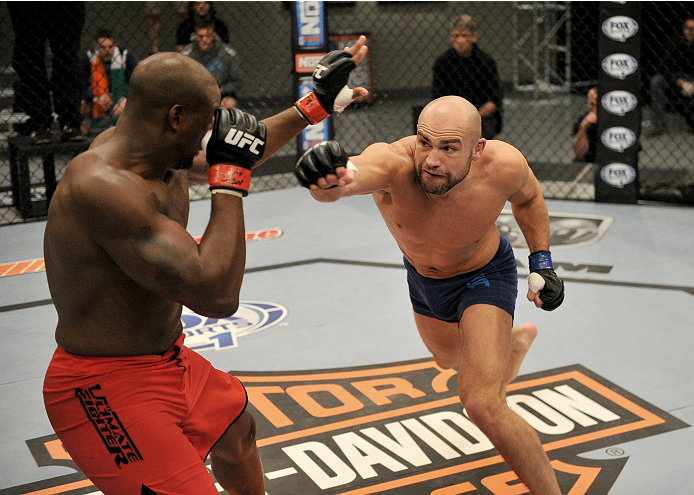 For Cathal Pendred, his entry way into the UFC nearly kept him from achieving one of his biggest professional goals.

Last summer when the SBG Ireland representative successfully defended his Cage Warriors welterweight title with a third-round stoppage win over Che Mills, he fully expected to get a call from Joe Silva inviting him to join teammate Conor McGregor on the UFC roster, but the call never came.

Standing atop the 170-pound ranks on the European regional circuit, there weren’t many fights that made sense for the former rugby player. After stopping a respected veteran who had previously enjoyed a cup of tea on the biggest stage in the sport, Pendred was left waiting for the right matchup to materialize, but nothing was coming together.

Instead of continuing to sit on the sidelines, Pendred heeded the advice of his head coach John Kavanagh and joined teammate Chris Fields in making the trip to Indianapolis to try out for Season 19 of The Ultimate Fighter and ended up making it into the house without having to win an elimination fight.

As the season played out, Pendred advanced to the semifinals of the middleweight competition, losing a split decision to Team Edgar’s Eddie Gordon. After the bout, UFC President Dana White confided in the Irishman that he believed he deserved the nod and would get the opportunity to compete in the Octagon once the season had played out.

Not soon after the date for the Ultimate Fighter 19 Finale was released, the organization announced it would be making its long-awaited return to Pendred’s hometown of Dublin just two weeks after the finale was set to take place in Las Vegas. The news left the 26-year-old newcomer torn.

“I got really worried that it was going to be a couple weeks after The Ultimate Fighter 19 Finale because after I had lost that split decision to Eddie (Gordon), Dana had said to me that he thought I won the fight and I was going to be getting my shot, so I thought I’d be fighting on the finale,” admits Pendred with a laugh. “I got pretty worried when they announced the Dublin card that I’d be fighting a couple weeks before that in Vegas and there would be no way of me competing on it, so when Joe Silva contacted me and told me I was on (the Dublin) card, I was over the moon.

“To be honest with you, doing The Ultimate Fighter was just about getting my foot in the door, getting that contract I’ve been looking for for a long time. I got that now. As much as not winning the show hurt at the time because I went in there believing I would win, it worked out for the better and I’m happy with the outcome.”

Fighting in front of his friends, family and countrymen inside the Octagon has been at the top of Pendred’s list of professional goals for five years, six months and three days – the exact amount of time it has been since the UFC last held an event in Dublin.

Held on January 17, 2009, UFC 93 not only boasted some major names on the fight card, including Rich Franklin, Dan Henderson, and Mauricio “Shogun” Rua, but there were a pair of potential future stars amongst the 9,000-plus fight fans that packed the O2 Arena that evening as well – Pendred and the man who will headline the organization’s return to Ireland, featherweight lightning rod Conor McGregor.

“Ireland is a small country, but it’s a very proud nation and they’ve always been proud of their fighters. The last time the UFC came around, we weren’t quite ready in MMA terms. We’ve always had a great boxing tradition and been world-class in that sport, but MMA we were slightly behind. We’ve caught up – more than caught up – with the rest of the world now and we’ve got world-beaters, myself included, in the country now and the country is behind us.

“I remember being in the audience, in the crowd in 2009 when the UFC first came to Dublin and the O2 – it was a month before my first pro fight and I said to myself, `The next time they come back here, I will be competing on the show.’ It took longer than we thought for the UFC to come back and it took longer than we thought for me to make my UFC debut, but they finally announced the card here and it’s the perfect timing.”

Though this will mark Pendred’s first official appearance in the UFC Octagon, it won’t be his first time competing before a raucous and partisan Irish crowd. He’s fought at home on a number of occasions, including serving as the headlining act for his championship encounter with Mills last June, so he has a good idea of what to expect when he makes his walk to the Octgaon.

While it is a moment he has been looking forward to for an extended period of time, Pendred also knows that the time to soak in the experience and let the powerful emotions of the moment wash over him is after he’s done trading punches with fellow Team Penn member Mike King.

“I’m so in the zone going into a fight, my mind is so set on what I have to do,” continues the 13-3-1 fighter who will compete here at middleweight before moving back to his natural 170-pound weight class. “I’ll enjoy walking down to the cage, but I won’t truly enjoy it until I look back and remember the roar that happens and the hairs sticking up on the back of my neck and the `Ole! Ole! Ole!” chants. I’ll reflect on how good that is, but I won’t get caught up in it at that moment because I still have the job to do. I’ll be so focused and so in the zone that I won’t get caught up.”

But when the fight is over and if he’s standing in the center of the Octagon, the Irish flag draped over his shoulders, Bruce Buffer bellowing his name as the referee raises his hand in victory, that is when Pendred will allow himself to take it all in.

“It will be a dream come true and I can’t wait,” says Pendred, the excitement evident in his voice. “I’ve been visualizing this and picturing this for so long and it’s going to be amazing to have it happen with the Tricolor draped around me in front of the Irish crowd going ballistic. I can’t put it into words how good it’s going to feel. I’m getting tingles just talking about it.”

As much as the bout with King will allow Pendred to cross off a major professional goal, the confident and competitive Dubliner wants to make it clear that it’s the beginning of a new and hopefully lengthy chapter in his career – one that will start with him earning the victory at home on July 19.

“I’ve kept it no secret from the start of my career that this is what I wanted to do – to fight in the UFC, in Dublin and now it’s coming true – but this isn’t the end of the dream; this is the start of the next chapter and a new journey. It took a little bit longer than I would have imagined, but I’m finally here and it feels great.

“(Every fight), I just go out there and fight my fight. I don’t take into account what his game plan might be. Even though I’ve trained with him, done a bit of sparring with him, I’m just focusing on my fight; that’s what has gotten me to where I am. I go in there, fight my fight, dictate the pace and I’m going to do that again this fight.

“He’s a good fighter and a tough fighter, but he’s not as good as me and he’s not as tough as me. I know that I’m going to come out on top.”