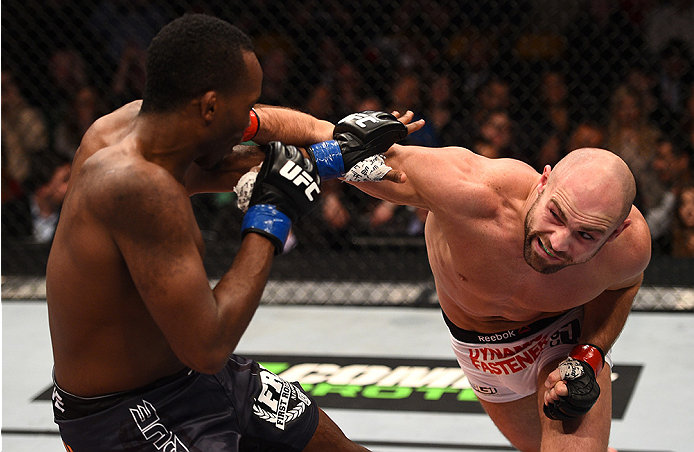 Cathal Pendred has been the Irishman fighting in Ireland, and on Saturday, he will see how the other half lives when he fights a Mexican, Augusto “Dodger” Montano in Mexico. But whether on the side of the cheers or the boos, none of it really matters for the 27-year-old welterweight prospect.

“When I go in there on fight night, it’s the same as every other fight night,” he said. “I’m going in there, there’s a guy across from me in the Octagon, and I’m just looking to go through him and go on to the next chapter. All the other variables don’t really matter to me. I know I’m going to be the bad guy, I know I’m going to get booed, but I’m not going to hate that person; it’s just part of sport. No matter what sport you do, there are rivalries and home teams and away teams, and sometimes you’re going to be cheered at home and sometimes booed when you’re away. And if you can’t handle that, you shouldn’t be a professional sportsman.”

It’s why Pendred has taken the criticism he received for his last victory, a close unanimous decision win over Sean Spencer in January, as part of the game. It doesn’t mean he particularly cares for those who called the win “the worst decision of all time” when it wasn’t close to that, but in this business, if you’re going to embrace the good, you also have to accept the bad. And in a world where social media gives everyone a public forum, it’s just another aspect of his chosen profession.

“It was very frustrating, especially the first couple of weeks,” Pendred admits. “It was a very close fight, and, first and foremost, I was actually disappointed just because I felt I didn’t perform that night. But I believe I beat him; I outstruck the guy, I took him down several times, I had submission attempts, but I was very disappointed in my performance. I just didn’t show up that night. After that initial disappointment, then to have the criticism on top of that was very extreme. It wasn’t just a few people saying ‘oh, that was a bad decision;’ it was like ‘worst decision ever’ and stuff like that. It was quite disheartening.

“There were three independent judges sitting around the Octagon and all three gave the decision to me, and it (the decision) had nothing to do with me,” he continues. “I just went out, fought my fight, and I don’t believe I fought as well as I should, but it’s out of my control. So I try not to worry too much. In this modern day, it’s a bit harder to get away from that stuff because of social media. People have a voice and you get to see people’s opinions more, even if at times it can be frustrating in situations like that.”

That’s life in the big leagues though, and Dublin’s Pendred wouldn’t trade it for anything, and why would he? Following a positive stint on The Ultimate Fighter 17, he’s gone on to win his first three UFC bouts over Mike King, Gasan Umalatov and Spencer. And on Saturday, following fights at home in Ireland, in Sweden and the United States, his passport gets stamped for his Mexico City matchup with Montano.

Traveling is a perk of the job for Pendred, but for this one, he made sure he got even more time at the site of the fight, spending over a month in the high altitude of Toluca, just outside of Mexico City.

“I had the opportunity to come over here for a press tour and I actually ended up doing a little bit of training with Gilbert Melendez,” he said. “I felt the effects of the altitude, and I just didn’t want that to be an issue or a factor. So I decided to go over as soon as possible. I’m very analytically-minded, I have a science degree, so I started looking into the science behind altitude training and competing at altitude, and from what I read, to completely adapt you want to be in the altitude for a month. So I took extra precautions and came over six weeks before the fight. I rented a house here, brought the whole team across, and we actually went to a spot that’s at a higher altitude than Mexico City.”

With training camp now in the books, it’s up for Pendred to perform this weekend and erase the memory of the Spencer fight in the eyes of the fans. He believes the results will speak for themselves, and while the Irishman is his own toughest critic, he can admit that it’s pretty good to be in a spot where he’s 3-0 in the UFC but hasn’t shown his best yet. That’s something he plans on rectifying very soon.

“I’m excited about this fight,” Pendred said. “I’m 3-0 in the UFC and I’m at the top level, but I still feel I haven’t performed anywhere near the best of my capabilities. There could be various reasons for that. I work with a sports psychologist quite regularly and it’s another part of my training, and it’s something we’ve been working on to figure out why is it that I haven’t performed at my best in the UFC. But it says something that I’m not performing at my best but I’m still winning. I’m so focused on putting on a spectacular performance in this fight and I believe when I do, I will start turning heads and make people start talking about me as a serious contender, someone who can compete at the top of the division.”