Catching Up with Adlan Amagov

"I really don't care who they put in front of me." - Adlan Amagov 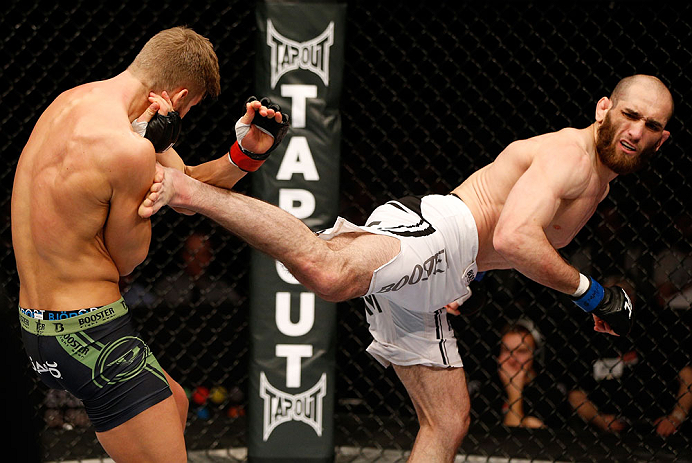 With a 3-1 record in Strikeforce, Adlan Amagov already did his part to establish his name on the international fight scene, especially among the diehards that immediately took to the Chechnya native’s aggressive style and finishing instincts.

But the UFC is a whole other animal, as Octagon vets from around the globe will tell you. The lights are brighter, the competition’s tougher, and the whole experience amps up the intensity meter tenfold.

Amagov found that out first hand in April, when he took on fellow Strikeforce vet Chris Spang.

“I was definitely nervous as it was my UFC debut,” said Amagov through translator / manager Sam Kardan. “I was also pretty cautious in the fight, keeping my opponent at a distance.”

Amagov got through it though, scoring a shutout three round unanimous decision win over Spang, a victory aided by the support of several of his family and friends who were in attendance in Sweden that night.

“A lot of people from Europe, Russia, and the US came to support me. The support has encouraged me to earn victory and go all the way.”

That should be the end of the story right there – Amagov makes it to the UFC, gets over the first-time Octagon jitters, and gets that first win out of the way. Next. But it’s not, because not only did Amagov make his UFC debut in April, it was also the first time the former middleweight dipped his toe into the waters at welterweight. Now you’ve added an entirely new wrinkle to the story.

“It was my first drastic weight cut of about 26 pounds, and it was definitely an experience for me,” said the 26-year-old. “But I learned a lot of new tricks from my teammate, Carlos Condit, and a few other guys. I was feeling fine during the fight.”

He also plans on staying at welterweight, which is welcome news for fight fans and something to dread for Amagov’s future foes. As for that future, Amagov doesn’t have a fight scheduled yet, but he has expressed a desire to get a spot on October’s Velasquez vs. Dos Santos III card in Houston.

In the meantime, Amagov is staying busy in the gym, and he also participated in a seminar in Russia with UFC light heavyweight champ (and his Jackson’s MMA teammate) Jon Jones.

“The seminar with Jones went very well, everyone enjoyed it,” he said. “The place was packed and we had a good turnout. Sam Kardan asked me to help out and it was great as I train with Jones on a regular basis. MMA is growing fast in Russia, with a lot of new clubs and shows.”

Maybe one day, Amagov will get the opportunity to compete in Russia again, something he hasn’t done since 2010. But for now, it’s all about his next UFC fight, yet in keeping with his anyone, anytime, anywhere attitude, “I really don't care who they put in front of me.”