Cat Zingano: The Number One is Back

"For some reason, all this stuff needed to happen this year, and it’s gonna make me bigger, faster, stronger in my future." - Cat Zingano 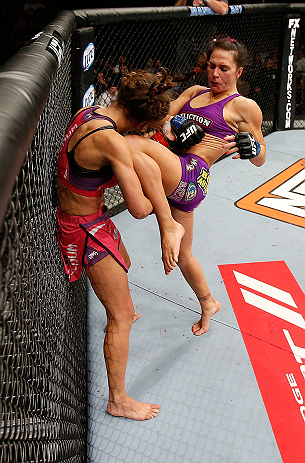 When Cat Zingano walked from the locker room to the Octagon for her UFC debut against Miesha Tate in April of 2013, it was one of those great moments in the sport that had nothing to do with what happens once the bell rang.

Showing every ounce of the emotion that comes from surviving a tough training camp and years of hard work to make it to a goal that may have not even seemed possible when she started, Zingano didn’t play the “tough fighter” role that night; she let it all out, her tears and smile speaking volumes.

“It was kind of a do or die kind of training camp,” she recalled. “The opportunity was there, and to quote my coach, he said when you’re approached with the opportunity of a lifetime, you need to act within the lifetime of that opportunity. So I wanted that fight and I needed that fight, and as soon as I walked out, it was all worth it. It was all there, and everything I worked hard for was opening itself up to me at that moment. I saw the faces, the lights, my name, and I was absolutely taken aback by what I had achieved. I was very happy.”

You could end the story right there and it would have been compelling enough. But Zingano - long considered one of those diamonds in the rough in women’s MMA that just needed the spotlight to show the rest of the world how good she was – still had to fight. And for two rounds, the emotions leading up the bout still had her in their grasp.

“I couldn’t snap out of it for quite a while,” Zingano said, but when she did, she pounced, scoring a come from behind third round knockout of Tate that earned the duo Fight of the Night honors in only the second women’s fight in UFC history. “I understand that in that fight I had a great comeback, but even that comeback says nothing about my potential. I’m capable of much more than that fight, and in a way, it’s a blessing because anyone training to fight me based off of watching that fight, they’re looking at somebody that wasn’t me.”

That’s scary, and when Zingano won, fans and media immediately speculated about the outcome of “Alpha” Cat’s next bout against the woman she would be coaching against on season 18 of The Ultimate Fighter, UFC women’s bantamweight champion Ronda Rousey.

Then disaster struck, first in the form of a knee injury that required surgery and scrapped her from TUF and a title fight against Rousey, and then with the tragic passing of her husband Mauricio in January.

She hasn’t fought since the Tate fight, but Zingano will make her return to the Octagon this Saturday in a UFC 178 main card bout against Amanda Nunes. How she’s made it back to this point is a lesson in perseverance, and that’s just how she describes her ability to get back in the gym, get back in fighting shape, and get back in the title race.

That’s what makes a fighter, and the 32-year-old Zingano is certainly that, along with being a mother to her son Brayden. But this week is all about the fight, and Nunes has lit a fire under Zingano.

“She just said some things,” Zingano said when asked if the Brazilian has gotten under her skin. “I’m not really the type person that you try to make mad because it will come right back at you. I’m generally very calm, very happy, very peaceful, but once I’m mad, it’s hard to get me un-mad. She’s trying to step on a rattlesnake.”

It’s a fight that has the potential to steal the show on a stacked UFC 178 card, and it’s the perfect way to reintroduce the number one contender to the masses. When you talk about that number one contender status, Zingano appreciates that the fans and media haven’t removed her from the place she took with the win over Tate 17 months ago. Now she wants to cement that place and stamp her ticket to a shot at “Rowdy” Ronda.

“It’s really important,” she said. “I feel it’s relevant because I won that fight (against Tate) to make me number one contender, and it stood out as Fight of the Night in only the second fight for the women (in the UFC). I earned my spot, and for people to respect that and encourage that meant a lot to me, especially with everything that went into being my best that night.”

It’s a rare acknowledgement, being that in this or any other sport, out of sight usually means out of mind. Knowing that and watching the world go round without you can often be more difficult than the physical part of dealing with an injury, but not for the Coloradan.

“It was definitely the physical part,” she said. “I wanted to get out and hang out with my kid and do things with my body that I physically couldn’t do. I was watching my friends train and wasn’t able to enjoy my physical outlet the way that I’m used to. That was really challenging for me. All that other stuff is just a byproduct of me working hard, and I wasn’t able to work hard. I’m a very active person, so having to deal with that was pretty rough on me.”

And through it all, she knew she was going to be back. Not as a shell of herself, but a better version.

“I just have goals, and I knew that when the time is right, I’ll be able to achieve them,” she said. “For some reason, all this stuff needed to happen this year, and it’s gonna make me bigger, faster, stronger in my future. So I just count on that.”

As for a Rousey fight…

“Of course that’s the ultimate goal, but I don’t look past anyone,” Zingano said. “This fight is the biggest fight of my life, so I’m focusing on this fight and that’s it.”