Cat Zingano, A Fighter In Every Sense, Embracing Every Moment

No. 1 contender Cat Zingano battles women's bantamweight champion Ronda Rousey at UFC 184 on Saturday, Feb. 28th, live from the STAPLES Center in Los Angeles. Check out the full fight card and the rest of the details here! 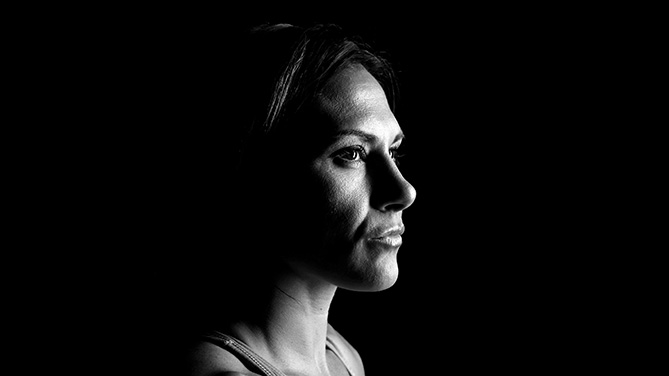 There are never enough hours in the day, certainly not for a single mom with an 8-year-old son and a stressful, demanding job. But Cat Zingano embraces every precious moment.

She knows why she’s here. She understands that everything she does – from making lunches and helping with school projects to applying a rear naked choke in the Octagon – is for her family. All two of them.

It’s a delicate balance: a mom by day, a UFC fighter by night. The juxtaposition seems illogical, if not inadvisable, but in Zingano’s frenzied world, it has its purpose.

“At the end of the day,” she says, “I’m fighting and putting 100 percent of my effort physically and mentally and emotionally into this career that is going to provide opportunities for us to live comfortably.”
••••
A mom who packs a punch? It’s all for the love of her son.
••••
> READ: Hollywood Beckons, But Ronda Rousey Only Has A Title Defense In Her Sights

There you have it. When Zingano challenges women’s bantamweight champion Ronda Rousey at UFC 184 on Saturday night at Staples Center, there is much more at stake than a world title. For Zingano, it’s about family.

Hers has already been rocked. A year ago last month, her husband Mauricio committed suicide at age 37. Zingano has been struggling emotionally ever since, coping with her grief while caring for their son Brayden. 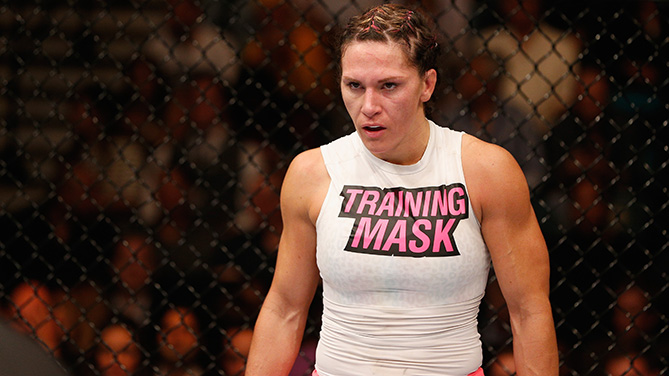 Time hasn’t eased her pain. Not even close.

“Everything that I do, I’m thinking about it and dealing with it,” she said. “It’s definitely a work in progress. The only thing I know how to do at this point is put one foot in front of the other and keep going.

“Hopefully, I’m a living example of how I want my son to live. That’s all I have.”

She also has her fighting, which has sustained her in difficult times and taken her to a showdown with Rousey – an unbeaten opponent who has won each of her 10 bouts by submission or knockout.

But Zingano, 32, is equally formidable, even without a UFC championship belt or the celebrity status Rousey enjoys. Zingano, known as Alpha Cat, is 2-0 in the UFC and 9-0 overall, with five victories by KO, three by submission and one by unanimous decision.
> WATCH: Free Fight - Zingano vs. Tate

A mom who packs a punch? It’s all for the love of her son. 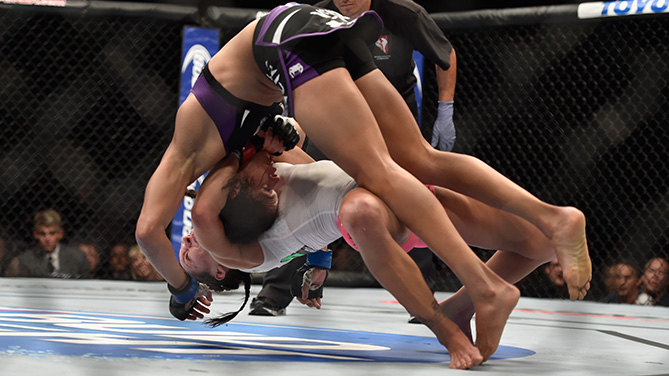 “Brayden is the reason she does this,” said her trainer, Leister Bowling of Elevation Fight Team in Denver. “She started this with her son, and she doesn’t want her son to see her quit until she reaches her goal, and that’s to be the best in the world. To do that as a single mother, that’s harder than any of these male fighters can ever imagine.”

Nothing will be more difficult than beating Rousey, who has yet to be tested in the Octagon. Only one of Rousey’s fights, a submission win over Miesha Tate at UFC 168, has gone past the first round. A succession of armbars has ended most of the others.

But Zingano, confident in her striking and her well-rounded blend of wrestling, Muay Thai and Brazilian jiu-jitsu, believes her skills are unlike any Rousey has faced previously.

“I don’t feel like she’s been challenged the way she will with me,” she said. “I feel like I’m a different, complete pedigree than anyone she’s ever been against, and I think she knows that as well.”

Her victories have come in a variety of ways. She used a rear naked choke to submit Raquel Pennington in 2012, set up her win over Tate with knees and elbows in 2013 and stopped Amanda Nunes last September using elbows and strikes.

Bowling learned that lesson early when he and Zingano were 15 and wrestled on their respective Denver-area high school teams. But their first encounter wasn’t exactly on friendly terms.
> WATCH: UFC 184 Media Conference Call

As Bowling remembers it, their teams occasionally cross-trained together. One day, Zingano, a member of the team at Fairview High in Boulder, came into the crowded gym and told Bowling and his teammate, both state champions, that she wanted to work out with them. 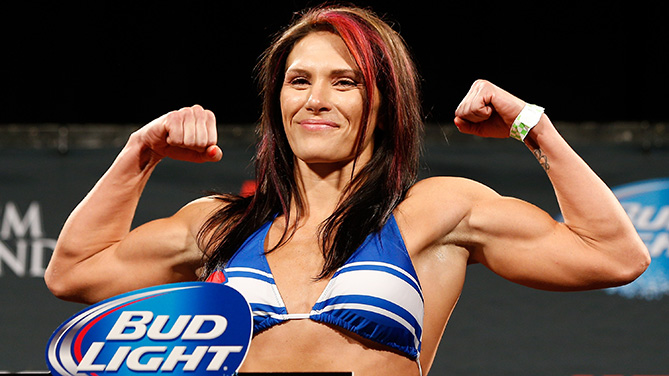 The young men were righteously offended.

“We took it like an insult,” Bowling said. “It was like this girl comes in and calls us out. I told my buddy I was going to beat her until she quit. I beat her up pretty bad. I think she ended up with a fractured cheekbone, but she never quit. To this day, I tell her, ‘I never made you quit, so I guess you won.’

“Ever since then, I’ve had respect for her.”

Their paths didn’t cross again until years later, when Mauricio Zingano approached Bowling and asked him to coach Cat leading up to the fight with Tate. That win was a rousing success, but the months ahead would dissolve into a nine-month unraveling that Zingano somehow endured.

First, there was the injury, a torn ACL in her left knee just before she was to participate in “The Ultimate Fighter 18” as a coach opposite Rousey. That would have culminated in a title fight with Rousey, but it went to Tate instead.

Zingano underwent surgery in the summer of 2013, then submitted to stem-cell treatment in both knees in October. But her planned return to the Octagon in early 2014 was knocked completely off course. 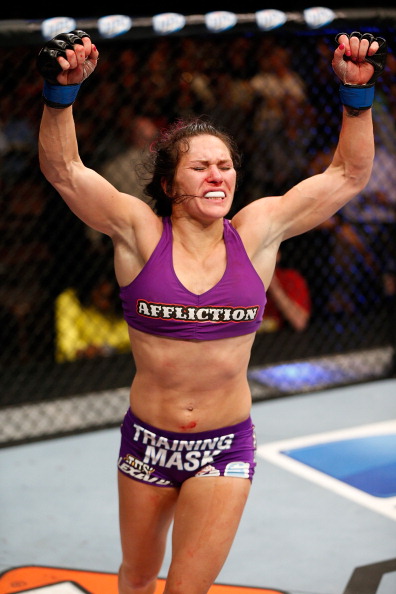 Mauricio’s suicide was like nothing she’d ever faced before. Worse, she had to tell their son. They relived the tragedy in January, on the one-year anniversary of his death.

Zingano didn’t return to the Octagon until last September, ending a 17-month layoff. But her TKO against Amanda Nunes at UFC 178 pushed her into title contention again, although much later than she expected.

“It’s been such a long time coming, and it’s constantly been on the horizon for me for about three years that I almost have a sense of calm that I haven’t experienced with other fights,” she said. “I’m at the top of this mountain, and I’m relieved to be here. It’s surreal.”

Zingano knows it’s only temporary. No matter what else happens, there is always her primary role as mother. Earlier this month, she helped Brayden finish a Valentine’s Day project for school then put in her usual training session at the gym.

“She’s a pretty incredible woman,” Ed Soares, her manager, said. “She does both of them very well, and she does a good job separating them. Neither job is an easy one to do.”

In fact, Zingano admits that cutting weight and long training sessions can make it difficult when she’s preparing for a fight.

“It’s very, very hard to balance, especially during training camp when I’m calorie-depleted or exhausted from workouts,” she said. “I’m peaking during certain weeks and he’s got kid things that are going on. Finding time to do all that, plus (media) interviews plus go to his wrestling or his sports or my sports – all of these things are a lot to get done in one day.

“But I also know that me learning how to fight and be good at these disciplines and improving as an athlete are also different ways for me to protect my son, in theory.” 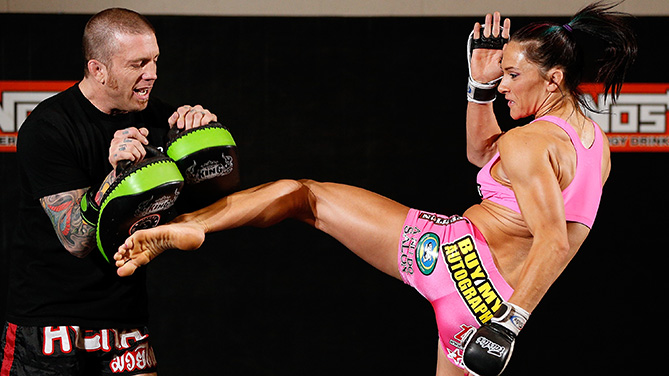 And what about fighting? It’s how Zingano makes a living, but she clearly doesn’t want her son beating up his classmates just to prove he’s as tough as his mom.

That’s a delicate balance, too.

“You could put a twist on this as violence, or you could say it’s a healthy outlet, a method of self-defense, or sport,” she said. “I’m a professional athlete in training, but when I go into the cage, I’m absolutely a fighter and I’m getting in a fight. The day-to-day, the conditioning, the sparring, the learning, the different disciplines that I apply myself to, all of those prepare me for this fight.

“Inside the cage, when I see that person across from me, it’s no longer a sport. I’m defending myself. I’m dominating someone else. There’s definitely a change in the actual combative moment versus the training.”
> WATCH: UFC 184 - A Girl Like You

Brayden will watch Saturday’s fight from home, on TV. He’s still too young to watch in person, although he grew up in the gym and knows what to expect. But not this time.

“I would dearly love for him to be there when I win the belt,” Zingano said, “but in reality, it’s an interesting crowd. You never know what you’re going to get.” 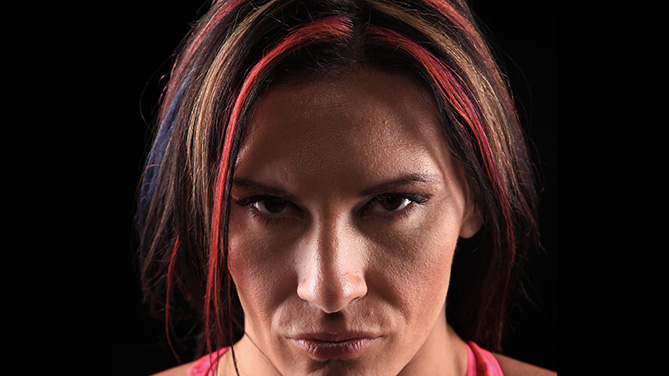 There will be other times. If all goes as planned, Zingano will enjoy her moment in the Octagon, then return home to Colorado and share it with Brayden.

And with Mauricio, who guided her career through its early stages.

“She’s one of the most caring and genuine people I’ve ever been around,” Bowling said. “I believe good things happen to good people. I believe in karma.

“She’s got some good karma coming her way.”