From Casual to Unbreakable - Jake Ellenberger's Rise to the Top

"The guy is tough and I have a lot of respect for him, but when we fight on June 1, I’m not going to fight him with any respect." - Jake Ellenberger 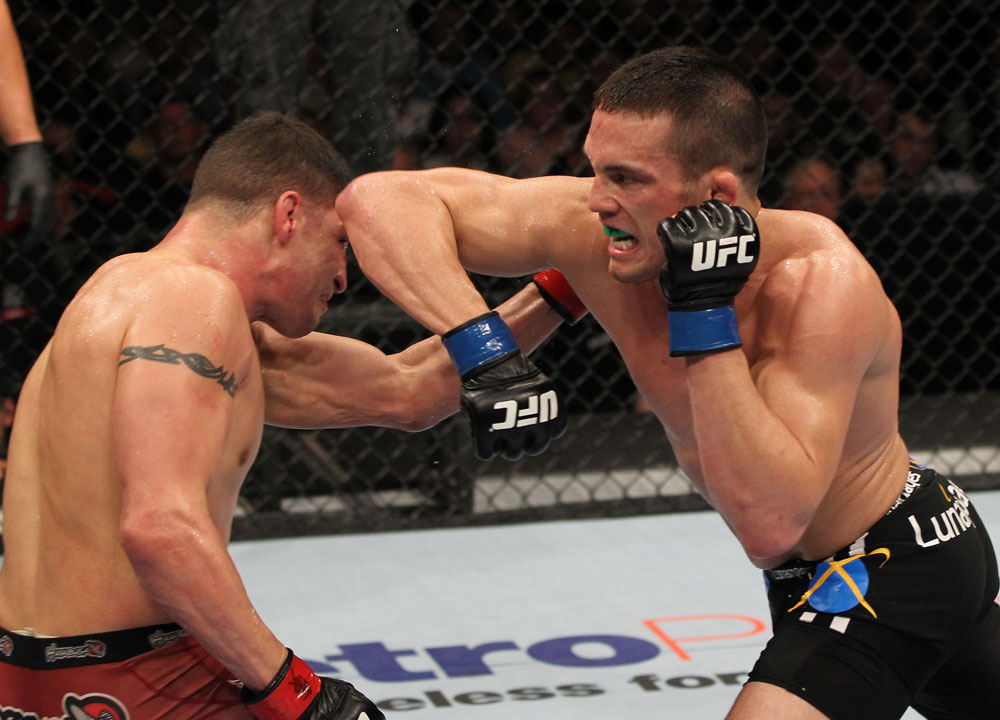 Jake Ellenberger is a top welterweight contender on the cusp of an extraordinary career. He’s evolved from good to great, and a chance at elite arrives on June 1 when he headlines his second consecutive UFC event against Martin Kampmann at The Palms in Las Vegas. A win may earn Ellenberger a shot at the title, and he knows he has it within him to be a champion. All he needed was reassurance from a champion in the game of life.

Jake and his twin brother Joe grew up like any ordinary kids in the suburbs of Omaha, Nebraska. As children they were a lot alike in addition to looking alike; Jake laughed when telling a story of how the brothers hated it when their mother dressed them exactly the same. The adolescent years brought divergent paths. Joe turned to wrestling and Jake to the park to showcase his skills on a skateboard. Watching Joe succeed – he went on to become a two-time Division II All-American wrestler at the University of Nebraska Kearney -- motivated Jake to keep up with the Joneses, or in this case the other Ellenberger.

“He was competing in wrestling when I started MMA and going to school at the same time; that’s when I walked on to the University of Nebraska at Omaha to wrestle,” Jake said. “My brother saw a lot more potential in me than I did. He believed in me when I didn’t believe in myself.”

Jake made the wrestling team at the college where he eventually became an assistant coach until the wrestling program was discontinued in 2011. But it was the United States Marine Corps that transformed Ellenberger from a freewheeling street kid to a man of mental toughness and discipline that, without him knowing, would lead him to his biggest of breakthroughs.

“When I first started fighting it was more of a hobby and I enjoyed it,” said Ellenberger, recalling a casual interest in a sport at the time not close to gaining traction in the mainstream.

Joe had bigger visions in mind. Seven years ago, Joe told Jake he’s the best welterweight in the world and he will be a champion. Jake considered it a pipe dream, but over time he learned it was possible, that he could actually do it. The notion was reinforced not far from where the brothers were born and raised. Ellenberger had dominated Diego Sanchez in the main event of the UFC’s debut on FUEL TV. But as Joe reminded Jake, the fight was three rounds, not two, so he pulled out a classic motivational speech, “You’ve got five minutes for the rest of your life.”

A right hand from Sanchez midway through round three that bloodied Ellenberger’s nose and a flurry of punches that came flying in his direction served as harsh reminders that success could be fleeting. What Ellenberger learned that night were certain X-factors the most brutal of training sessions cannot teach. Fighting is truly a game of mind over matter, and on June 1 in Las Vegas, Ellenberger has his showdown with Kampmann to be decided in five rounds or less. He saw “The Hitman” drop a close decision to Sanchez while sitting ringside. On the tube, he watched Kampmann do what Sanchez nearly did to him, as the Denmark native locked in a guillotine choke with 48 seconds left in the fight to shock Thiago Alves two months ago.

“He’s always dangerous,” Ellenberger said. “The guy is tough and I have a lot of respect for him, but when we fight on June 1, I’m not going to fight him with any respect. I’m looking forward to introducing myself.”

The winner may end up being introduced as the next No. 1 contender at 170 pounds. Awaiting battle is champion Georges St-Pierre, unbeaten in the last four-and-a-half years but rehabbing a torn ACL, and interim champ Carlos Condit. If St-Pierre is fit, the two are expected to meet late this year. If not, Condit will need an opponent, and Ellenberger could be in position to stake his claim. In his career, Ellenberger holds wins over Sanchez, Jake Shields, John Howard and Mike Pyle. A high caliber level of competition boosted the credentials of Frankie Edgar and Benson Henderson to where it led both to a title reign. The scuttlebutt among fans and media has suggested that Ellenberger will be the rightful top contender if he gets past Kampmann. Normally loquacious and outgoing, Ellenberger is refusing to engage.

“I don’t really care, to be honest,” Ellenberger said. “Right now it doesn’t matter. I haven’t been thinking about anything other than Martin Kampmann. The only thing that matters is this fight. I have to prove again that I’m a contender for this title. I can only control what I can control, but I haven’t looked past Kampmann at all. I can’t get complacent. He’s always dangerous and a skilled fighter. I can’t take him lightly.”

The last time Ellenberger lost a fight was three years ago, when an injury to Chris Lytle created his debut UFC bout against Condit, a former WEC champion brought into the parent promotion once Zuffa dissolved the WEC welterweight division. The fight went the distance and Condit was awarded the second and third rounds to escape with a split decision win. Six consecutive victories later, Ellenberger has dramatically improved, and that’s a scary thought. He’s more mature mentally, refined technically and smarter in training, all of which is derived from working with top middleweight contender Mark Munoz, a former NCAA champion, Reign Training Center teammate and one of the top wrestlers on the planet.

Most of all, Ellenberger is hungry for another chance at Condit, who ironically five months before squeaking by Ellenberger lost a razor-thin split decision to Kampmann. But Ellenberger’s recent run has validated his nickname “The Juggernaut.” His brother Joe has forged a heart and mind fit for a fighter, leaving no doubt about what he can accomplish, whether it’s Condit or anyone standing opposite him inside the Octagon.

It’s just that loss, that one damning, gut-wrenching loss to Condit, which still cuts deep.

“I can beat that guy. I can beat him. I know I can beat him,” Ellenberger said. “It’s very motivating. It makes me more hungry. [Winning the Kampmann] fight gets me one step closer to that title shot and becoming a world champion, which is really the only reason why I’m in this sport.”

It wasn’t only genetics that got Ellenberger to this point. Joe Ellenberger’s influence and inspiration has made Jake believe in himself and his potential. Joe’s battle with Paroxysmol Nocturnal Hemoglobinuria (PNH) is well documented. Joe receives blood transfusions every two weeks to manage his condition. He not only copes, he lives. Joe won his last MMA fight with a rear-naked choke in the third round to move to 13-1. He will again corner his twin for the Kampmann fight. He’s feeling good, just bought a house and expecting his first child in September.

“It’s hard to put into words,” Jake said. “How he’s dealing with it, it’s changed my life. Fighting has become more than a passion, kind of a fuel to the fire of becoming a world champ. He’s always believed in me, telling me ‘I told you so.’ When you have a twin brother you always have a friend around.

“It’s not so much what happens to you, but how you deal with it. When he first got diagnosed it was obviously hard for us, but just to see the way he deals with that … he loves his life and wouldn’t change a thing for anything. He’s always like, ‘I can beat this.’ He’s probably, mentally, the toughest guy I’ve ever met and ever seen. To see how he deals with a lot of things has put a stamp on that claim.”

Jake was quick to add that if given the choice to trade places he’d do it in “a blink.” Joe, though, insists that Jake be comfortable in his own skin. His flesh is one win from a possible chance at gold. His spirit is centered to where confidence is unshakeable and resolve is unbreakable.

“Fighting is a small part of your life,” Jake said. “Right now it’s obviously consumed a lot of my life, but in the big scheme of things it’s really not. Everybody is going to have fights in their life. When character comes out in adversity, you can handle anything in life.”