"I’m fighting for the belt, co-main event on the first UFC card in Ontario, so I have an obligation to do as much as I can to help promote not only my fight, but the sport in general up here.” - Mark Hominick 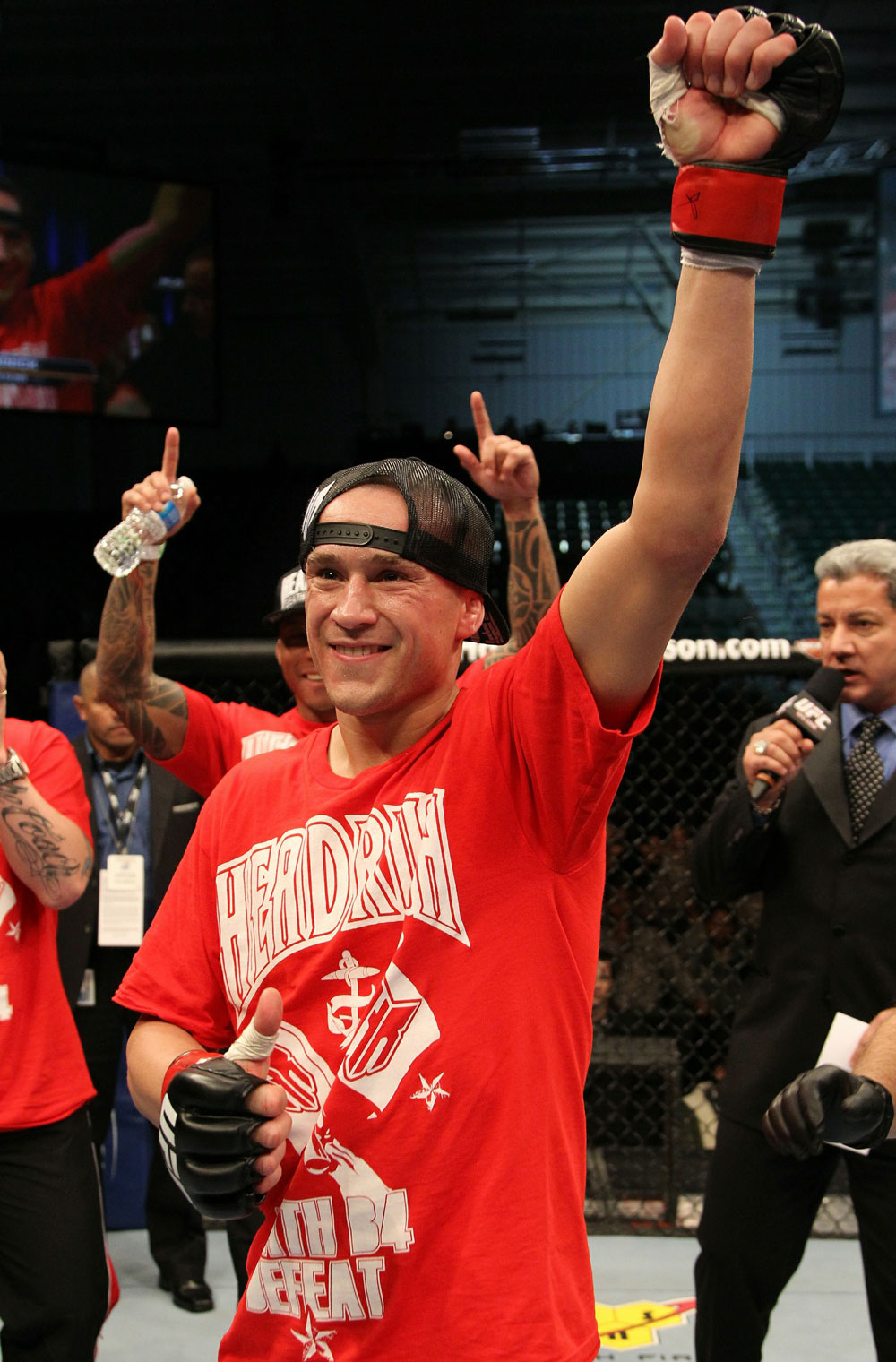 If Hollywood made a movie about Team Tompkins, the London, Ontario fight team consisting of Mark Hominick, Sam Stout, and Chris Horodecki, producers would have some of the richest characters in all of mixed martial arts to cast in their film.

The handsome and brooding Stout, with his piercing blue eyes and chiseled features, would be played by Star Trek’s Chris Pine. Horodecki, the former IFL and WEC star with a puckish sense of humor and a stand-and-bang fight style, would go to The Social Network’s Justin Timberlake.

And while the platinum blonde coach Shawn Tompkins (he’d play himself in the film, naturally) is the de facto team leader, number one featherweight contender Mark Hominick’s character would need a special kind of actor to portray the range and depth the real life man has in his personality.

A University of Windsor graduate with a degree in Commerce who started training in martial arts in ninth grade, Hominick would need to be portrayed by an actor who not only kicks ass – after all, he hasn’t lost in three years – but someone who is convincing as a thinking man who never buckles under the pressure of the moment.

Matt Damon of the Jason Bourne series would likely get the nod.

“Matt Damon is definitely cool. The Bourne Ultimatum and all of those films definitely made him a lot tougher. I can live with that,” he says, agreeing that Tompkins would play himself.

“Nobody but Shawn could play Shawn.”

And while a typical Hollywood movie would produce some kind of fantastic ending pitting the protagonist against his toughest challenge in a champion like Jose Aldo, in front of a record setting hometown crowd of 55,000 screaming Canadians – the reality is just as amazing.

Not only will he have the fight of his life against the best featherweight in the world in front of a record audience in his home country of Canada, but his wife Ashley is due to give birth to the couple’s first child, a daughter they will name Raeya, just five days after the fight.

“Jose has had to overcome many difficulties in his life. Sleeping in the gym, he’s had to fight a lot harder for things in life than I have for sure. I’m fortunate that I am from Canada, where we enjoy certain privileges, but that doesn’t mean I’m not as mentally tough as he is,” says Hominick, who grew up amidst the brutally cold Ontario winters, a stark contrast to the sun and heat of Manaus, Brazil --- from where his opponent hails.

Hominick agrees with that distinction.

“What makes him so dangerous and pound-for-pound one of the best is that he can finish guys from anywhere,” says Hominick. “On the feet, in the clinch and on the ground, he’s so well rounded that preparing for him in this fight camp has been a lot of fun. Because he’s so dangerous everywhere, we brought in a lot of guys who are great in different areas.”

Hominick, for his part, however, is no slouch.

A former ISKA super welterweight kickboxing champion, “The Machine” has finished 16 opponents by knockout or submission, including the likes of George Roop, Yves Edwards and Yves Jabouin, and he’s currently enjoying a five fight win streak.

“I don’t think he’s seen anybody with my hand speed and footwork,” says Mark. “I think I’m the one question mark for who he’s been able to take out so far. It’s going to be interesting to see how he meets the challenges I will pose to him on fight night.”

For Team Tompkins, fight camp is usually in Las Vegas at the TapouT Training Center. However with a pregnant wife and a fight just one hour away from the Adrenaline Training Center, a gym he co-owns with Stout and Horodecki, Mark stayed north of the border and brought fighters and trainers to him this time.

“There’s no jetlag and no travel time so that’s an added bonus come fight day,” he said. “Shawn and BJJ coach Keebo Robinson came up to London and Sam and Chris are here. 155-pounder Jorge Brito is a BJJ black belt and he’s been working with me. I have a lot of great national team wrestlers who’ve been in and I’ve been boxing with some Olympic boxers, working on my footwork and my clinch game.”

And while most fighters training for a championship fight are focused on getting the belt, Hominick says having a pregnant wife during this camp has kept things in perspective for him.

“It’s been overwhelming, everything’s happening all at once,” he said. “We are trying to enjoy the ride and take things one day at a time. There will never be another time like this in our lives. Fighting for the title and giving birth to our first child, this is a once in a lifetime opportunity. It’s going to come and go but we’re trying to enjoy it all. There are days when Ashley is really stressed but we’re trying to make it all work. Yesterday I did nine rounds of sparring, left the gym and went straight to Lamaze class. Those are the types of days we’ve been having.”

For Hominick, everything that has happened during the course of his decade long career – training, wins, losses, travel, coaching and running his gym – has been preparation for April 30.

“I believe it’s my destiny,” he says. “It’s a huge opportunity. This is my tenth year as a pro, and to fight in my home province on the biggest card of all time, a baby on the way, I’ve been training for this for fifteen years. My whole fighting life has been in preparation for this one moment. I really do believe everything happens for a reason, and you’re right, Hollywood couldn’t have scripted it any better for me.”

Hominick started competing in martial arts just two weeks after signing up for his first class. It was a ninth grade gym class field trip to a London, Ontario martial arts school that changed the course of his life forever, something that his mother and late father weren’t too keen on.

“They were really never into me being a fighter,” he said. “They are not fight fans. My mom’s first question to me after every fight is ‘Are you retiring now?’ My father was a great athlete, but he and my mom wanted me to go the business route. That’s why I have a degree from business school. But now my mom’s pretty into it. She’s very supportive, especially when she’s got co-workers who want autographs (Laughs).”

Hominick’s father succumbed to cancer four years ago. He says that while many fighters fight through adversity to get to the top of the fight game, nothing really compares to seeing someone suffer through chemotherapy.

“We lost my dad and my wife’s mom within six months of each other, and they were going through cancer treatment at the same time, so it was a really difficult time, seeing them go through all the treatment and fight so hard, but to see those people battling cancer it’s an awful thing to see anyone go through, let alone someone you love,” he said. “He’d be proud, but fighting wasn’t something we shared. He didn’t really understand the mindset of fighting, but he’d support me in his way. He’d come to my fights but he’d leave right after.”

These days Mark’s world is consumed with mixed martial arts. He trains full time, he watches fights as much as possible, reads the industry sites and magazines and tries to stay as healthy as he can. He believes that having a close team in Shawn, Sam and Chris is part of the reason he’s been in the fight game for so long and is in the position now to fight for the title.

“Shawn was the best man in my wedding,” he said of ‘The Coach.’ “Sam, Chris and I were all groomsmen in his wedding to Sam’s sister Emilie. We are all very close, like brothers, and that’s really important. I think that’s what separates us from a lot of other fighters, especially recently, as you see people gym-jumping. We’ve been the same crew for twelve years and there’s a certain bond we have with each other. There are things I can’t do without them. And it’s really because of Shawn. He’s always led the way and been the one that brought the passion out of all of us. He leads by example.”

For Hominick, coming in to this fight as a huge underdog doesn’t mean he’s not feeling the pressure of the moment. He says that as soon as the fight was announced to take place in his home province, not a day has gone by without reporters calling or dropping by the gym, but he says he’s relishing the moment.

“You know guys can’t just show up in Georges St-Pierre or Jake Shields’ gyms,” he says. “But since I’m only an hour away from the venue a lot of the buzz that this card has brought to the area has led a lot of the sports reporters to me, which is great. My life changed overnight on January 22 as far as me being kind of a face of MMA in the area. So a lot of the attention of the show is coming my way. I’m fighting for the belt, co-main event on the first UFC card in Ontario, so I have an obligation to do as much as I can to help promote not only my fight, but the sport in general up here.”

As the UFC continues to grow and mixed martial arts becomes more and more accepted in the world of professional combat sports, it’s not such a stretch that Hollywood would do the Mark Hominick story. After all, most movies are shot in Toronto anyway. Like the fight on April 30, it would be an easy commute.