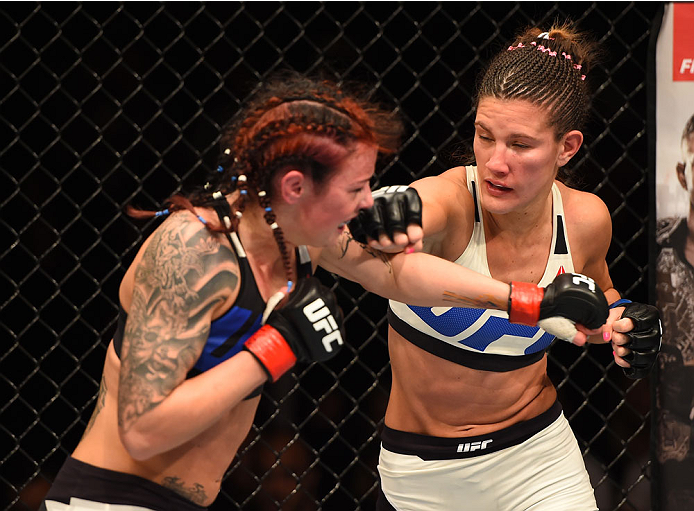 Hate to disappoint, but there were no Rocky III-type fights behind closed doors when Cortney Casey traveled to Poland to train with UFC strawweight champion Joanna Jedrzejczyk earlier this year. There was plenty of mutual respect though, and even more good work that was reflected in Jedrzejczyk’s November 15 win over Valerie Letourneau and what Casey hopes is a similar result when she meets Seohee Ham in Seoul this weekend.

“Everything met up perfectly, and we were able to train together and I think it’s definitely going to pay off in my fight and I’m pretty excited about it,” she said. “We were just there to get better and help each other.”

Yet with both in the same division, it does bring up the question of what happens if the UFC calls up with an offer for the two to fight. You already know the answer to that one.

“At the end of the day, we’re fighters,” Casey said. “If they call us and say we’re going to meet up, then we meet up. That’s how it goes. We’re both respectful fighters and we understand that to be able to grow in the sport, you’ve got to have training partners, and you’re going to bring the people in that are going to help you. We’re both very humble, so we got along great. And if we get a phone call, I’m sure she’s not going to hesitate to take it, and I’m not gonna hesitate to take it. We’re going to do our job and be friends after. That’s how we approach each fight.”

Casey, 28, may be only six bouts into her pro career, but she is a true fighter. That much was evident in her UFC debut in July, when she tackled Scotland’s Joanne Calderwood in Glasgow on short notice. Yeah, she took the bout without a full camp, which was admirable enough, but the truly impressive part of her performance was how she kept pressing for all three rounds, looking for any opening to finish. You may assume that’s the norm, but often, a fighter taking a bout on short notice will have an initial surge of energy, but then fade as rounds two and three approach, subliminally assuming that even with a loss, he or she will get another shot in the Octagon. Casey didn’t subscribe to that notion.

“My mindset was to go in there and put on a good show and show the UFC that I do belong in there,” she said. “I wasn’t saying ‘if I lose, no big deal, I’ll get another shot.’ I was definitely going in there to make a statement and win the fight, and I just happened to get a top ten fighter. If you get thrown a top ten fighter, you have a chance to prove yourself – not only to yourself, but to the UFC and everyone that’s been supporting you and have been doubting that you are a top fighter. I wanted to prove that I was ready, that I’ve been ready, and this is my time and I’m going to take every opportunity to make sure that I make the best of it.”

Casey lost the bout to Calderwood via decision, but on the positive side, she earned Fight of the Night honors and made an impression in a division where a couple solid wins could put her in the title race. Casey isn’t about to lose focus on her ultimate goal in place of her newfound celebrity though.

“I train, I focus on my gym and my family, and everything else is just secondary to me,” she said. “I appreciate all the fans that I’ve got, all the ones that have been there in the past and all the supporters, but if anyone knows me, they know who I am and what I’m about, and I’m not someone that’s gonna be walking around saying ‘oh I’m a UFC fighter.’ I’m just Cortney. Fighting is part of who I am, but it’s not who I am as a person as a whole. I try to float under the radar as much as I can, and then when it’s time to go, I go, and then it’s back to my normal routine.”

This Saturday, she’s going to Seoul to face local favorite Ham, and with Scotland, Guam and The Philippines being the sites for her last four fights, she’s no stranger to piling up the frequent flier miles. But the Arizona native wouldn’t mind a return to Stateside action in 2016.

“It’s definitely a perk to be able to travel and stuff like that, but it’s always nice to be able to fight closer to home, where your family and friends can go and support you,” she said. “They’re there with you every single day, helping you out and supporting you, so every now and then it’s good for them to actually be able to come to a live show and watch you compete. The past four fights have all been outside of the U.S., so they couldn’t come, so hopefully in my next fight or my fight after that, it will be in the States, where they can come and support me.”

And Arizona or Hawaii, where she’s currently based, would be perfect.

That doesn’t mean the former Division I soccer player for UTEP is bothered by being the “bad guy” while on the road. In fact, it sounds like she likes it.

“I have no problem being the bad guy or having a target on my back or being the underdog,” Casey said. “It’s just part of being an athlete. You can either embrace it or you can hate it, and I just embrace it. There are always going to be people that don’t like you or think they’re better than you, and you just have to believe in yourself, believe in your training and your support system and know that you’re there to do your job and get your job done. Win or lose, I’m out there to put on a good show for the fans, and as long as I keep doing that, I know the wins will come.”