Casey O’Neill Called Her Shot From The Start

Casey O’Neill called her shot before she ever stepped into the Octagon.

“My goal is to just fight everybody in the flyweight division and just finish everyone,” she told UFC.com ahead of her UFC debut in February 2021. “Ultimately, that’s my goal.”

O’Neill went on to finish Shana Dobson in the second round, and then proceeded to finish Lara Procopio and Antonina Shevchenko to complete a 3-0 campaign in 2021. Many publications, including this very website, touted O’Neill as the best newcomer of the year.

“It’s what I wanted and expected of myself,” O’Neill told UFC.com in Houston. “Work hard, and you get the rewards at the end, so I’m very happy with my 2021, and I look to build on that and make 2022 even better.”

After her win over Shevchenko in October, O’Neill took a short break before getting back to work. Cracking the Top 15 in the growing flyweight division is certainly an accomplishment, but she has eyes on bigger goals, which begins with taking out Roxanne Modafferi at UFC 271.

The fight is her first in front of proper crowd since joining the UFC roster, but the stoic O’Neill sees this moment as nothing more than “business as usual but significantly different.”

“I’m obsessed with being the best,” she said. “I know I won’t get there overnight, so I gotta keep working. I had enough time.”

Modafferi, who announced she is retiring after this fight, presents an intriguing and stiff test for O’Neill. The lifelong martial artist is the most experienced opponent O’Neill could possibly face, and she has made a habit of turning away surging up-and-comers with her craftiness and experience.

Although O’Neill holds respect for Modafferi, she is supremely confident in her ability to rise to the occasion and take advantage of the moment.

“I think that this is a great next step for me fighting someone with a lot more experience than I have,” O’Neill said. “Going out there and proving that I’m better than everybody is always my goal, so proving that I’m better than a veteran in the sport will be a big deal. Props to her and everything that she did for the sport, but it’s definitely a passing of the torch moment. I think that the skills that she has are not enough for the UFC anymore, and I think that’s why she’s retiring. I think I’m going to go out there and prove I’m better everywhere.”

O’Neill is at the forefront of the talent rush that arrived in the flyweight division in 2021, along with Manon Fiorot and Erin Blanchfield.

O’Neill believes 125 is going to be the premier division sooner rather than later, and so she is preparing to also handle a brighter spotlight. When it comes to handling the hype buzzing around her, she is doing so with relative ease, especially as she continues to rack up the dominant performances. While O’Neill isn’t the most outspoken fighter, she does project the confidence of an undefeated fighter who knows exactly how good she is and could become.

“I’m not the best at interviews and talking, but I’m definitely getting better at it,” she said. “I think I do most of my talking with my fighting, so if I keep fighting that way, I’m going to have to keep talking better.” 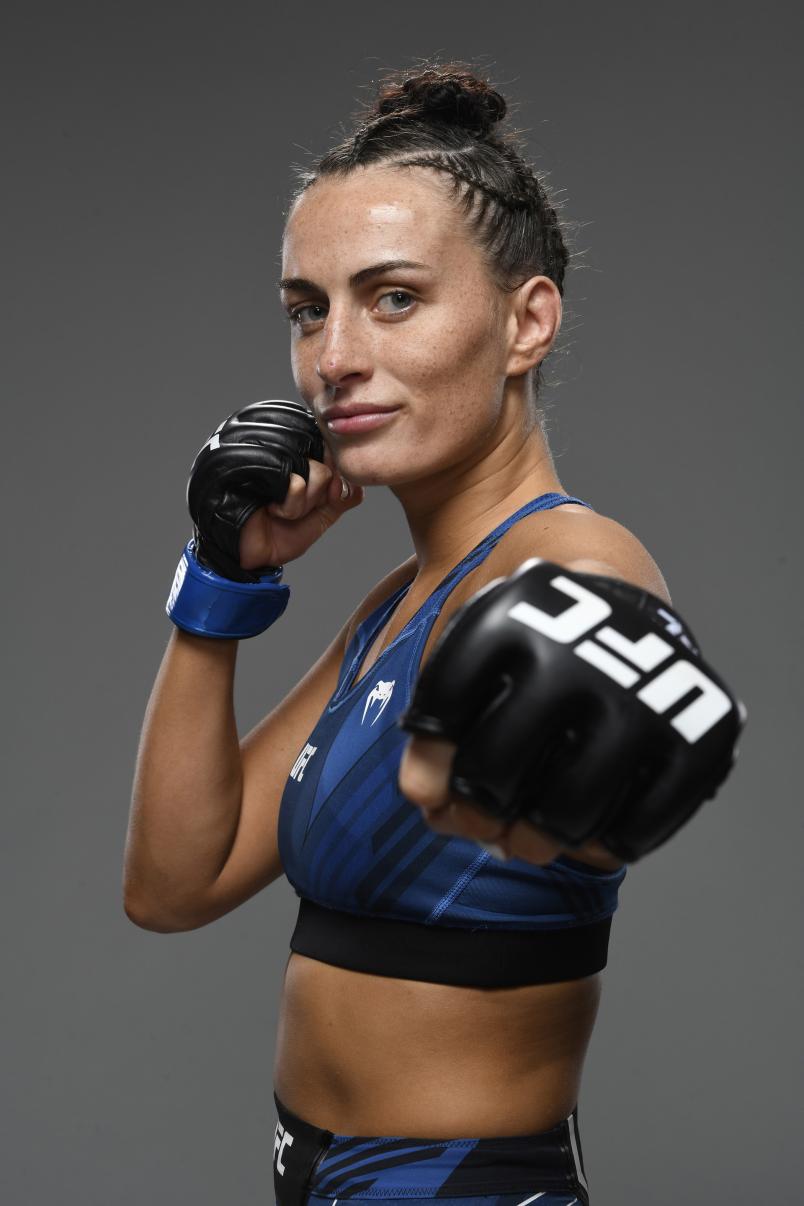 Casey O'Neill of Australia poses for a portrait backstage during the UFC Fight Night event at UFC APEX on October 02, 2021 in Las Vegas, Nevada. (Photo by Mike Roach/Zuffa LLC)

O’Neill has some stable roots in Las Vegas, as well, adding to her list that consists of Scotland, Australia and Thailand as places she has proudly called home. She still plans to go back to Thailand at some point but, for now, she has found a flow at Xtreme Couture.

So, after a banner 2021, the self-described “Scossie” can start marching toward that Top 10, and perhaps toward a title shot. The division has long been under the reign of flyweight queen Valentina Shevchenko, but “King” expects to challenge for the throne soon enough. Even though she enjoys a busy schedule, she knows selectiveness has its advantages up the ladder, as well. Regardless, she is going to relish another chance to showcase her stuff and continue to build steam toward the top of the heap.

“I love being able to go out there and prove myself,” she said. “I love the fight week vibe even though I don’t love training camp so much, but I’m definitely looking forward to this one, and then we’ll see. Maybe it’ll be a two-fight year because I’m really trying to get on another pay-per-view card and just stay on that pay-per-view vibe.”