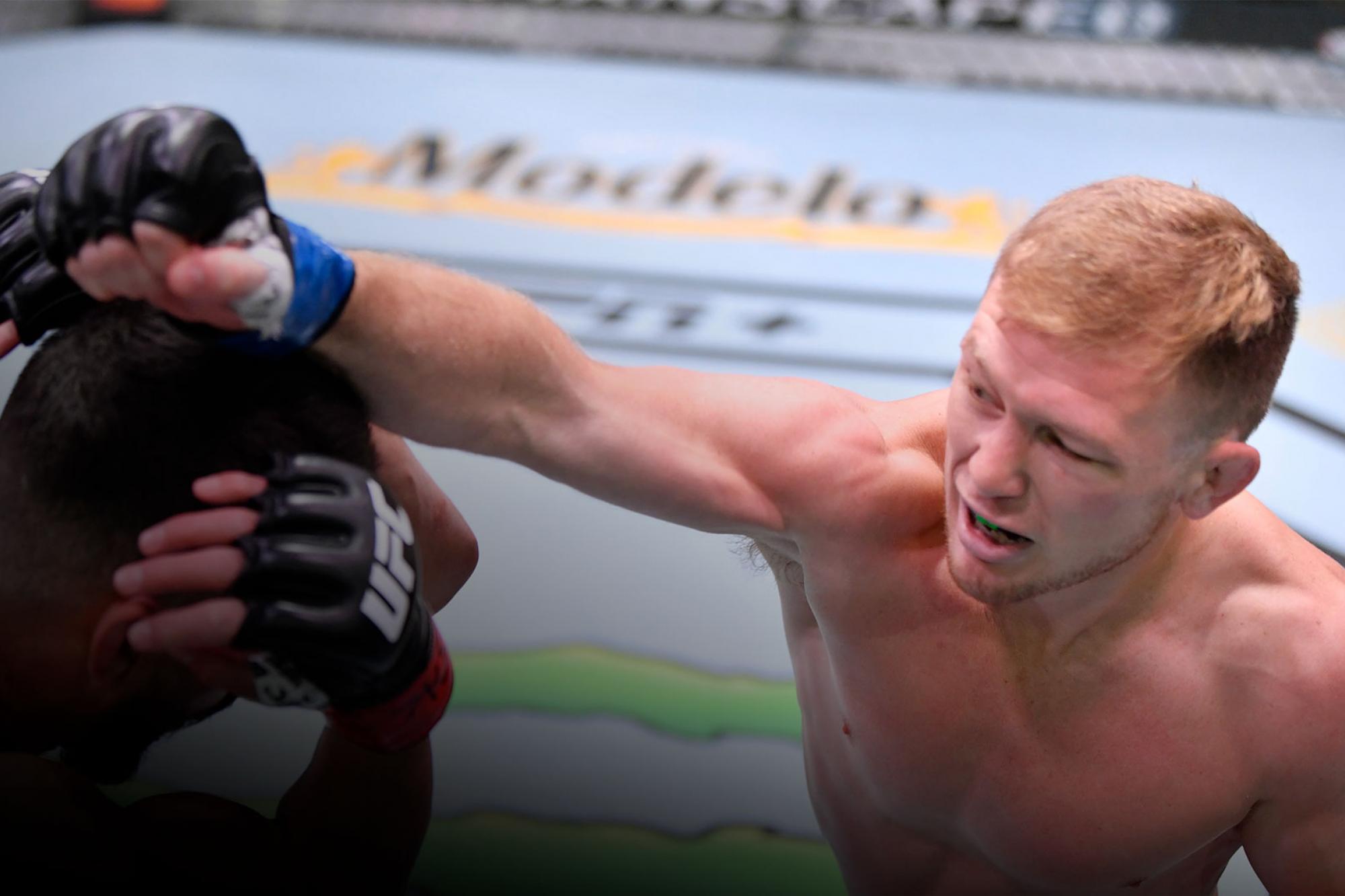 Casey Kenney was hoping to return to Fight Island for a second fight after his first bout on Oct. 4. He got his wish
By Thomas Gerbasi, on Twitter: @TGerbasi • Oct. 21, 2020

Casey Kenney went into his October 4 fight against AlatengHeili with one intention. Well, maybe two. The first was to beat his opponent; the second, to get another bout on Fight Island as soon as possible.

Bantamweight prospect Casey Kenney is looking to go 2-for-2 on Fight Island after securing a decision win at UFC 253 less than a month ago.

He hit both marks, scoring a one-sided win to move to 4-1 in the UFC, and after calling for a quick turnaround, he’s back in Abu Dhabi for a Saturday meeting with fellow rising star Nathaniel Wood.

About the only wish that wasn’t granted was sleeping under the Octagon on the beach until he got another fight.

“If they would have went the following weekend, I would have stayed and slept under the Octagon on the beach,” laughed Kenney. “Twenty more days, I've gotta come back. Obviously, the coaches had to come back, too, but I got a little bit of a training camp in and got to reset.”

A training camp, in less than 20 days?

“I did enough of a training camp for the last one for this one, too,” he laughs. “I got probably eight, nine days in where I got back to pushing it hard and making sure everything was still sharp from a couple weekends ago.”

So after going from Abu Dhabi to Arizona to Las Vegas and back to Abu Dhabi, is he still happy that he asked for – and got – another fight so fast?

“I was grateful for it,” said Kenney. “I was hoping for that, I was speaking it into existence, and it happened. It wasn't the following weekend but it's close enough for me, and I couldn't be on a better card. The Khabib-Gaethje card is what I wanted plus more.”

The world will be watching this weekend’s UFC 254, headlined by the lightweight championship clash between Khabib Nurmagomedov and Justin Gaethje, making it the perfect platform for Kenney to display his wares for the fourth time this year.

In February, he lost for the first time in the Octagon against Merab Dvalishvili, but he roared back with a first-round submission of Louis Smolka in May, and against AlatengHeili, he came as close as a fighter can get to a Performance of the Night bonus without scoring a highlight reel finish. And while he didn’t get that extra check, he’s satisfied with his effort, especially since he got to show off his striking game for three rounds.

“That was the game plan,” Kenney said. “Go out there, put my hands on him, kick him hard. I thought he would make some adjustments and we would have more of an MMA match. I thought he was gonna shoot, being a tough wrestler. I thought I was even gonna shoot. (Laughs) But what I was doing was working and it was working so well. I was constantly in that mode of okay, one more body shot, one more left hand and he's gonna go down. Before I knew it, he was battered, and 15 minutes had went by.”

It was the kind of win that made fight fans sit up and take notice, and even more will tune in to see Kenney face Wood, who shares an identical 4-1 UFC record with the Arizonan.

“If you don't know I'm a well-rounded mixed martial artist now, you haven't paid close enough attention, that's for sure,” said Kenney. “And I think this is a great matchup to put both of them together. I feel like I've showed one here, one there, both sides of what I can do. There's the final form, which is using it all at once. And looking at what we've done inside the Octagon, we've both got eight wins between the two of us, which, in the bantamweight division, is tough. Our only losses are to tough guys and whoever comes out on top of this one I think is the next guy to start working his way back up into those rankings and into a title shot, which is my ultimate goal. A little loss, a bump in the road, that's not gonna stop me from the ultimate goal, so we're both headed towards that same goal, I believe.”

But will there be another post-fight request to be booked as soon as possible?

“We’ll see,” he laughs. “Maybe we’ll have to give them one more for the year.”