Casey Kenney Will Show Up Wherever, Whenever

Wherever and whenever you need me to show up, I’ll show up and the bigger the stage the better I perform. I’m a guy that performs well under pressure.”
By Thomas Gerbasi • Aug. 16, 2019

In the town of Portland, Indiana – population of just over 6,000 – there was no tougher 10-year-old than Casey Kenney.

“I think I was the toughest 10-year-old around,” laughed Kenney, who won his first national title in judo at that age, just four years after he hit the mat for the first time. “I’m from a small town and not a lot of people were doing martial arts. I was small, but I didn’t get picked on a lot.”

That’s not surprising. And 18 years later, no one is picking on the bantamweight prospect, who is still chasing gold, this time in the UFC.

“I’ve been trying to be the best in the world in everything I competed in since that age,” the 28-year-old said. “It’s years of competition, competing overseas, competing in huge tournaments with thousands of people there, all that stuff. I’m a competitor. Wherever and whenever you need me to show up, I’ll show up and the bigger the stage the better I perform. I’m a guy that performs well under pressure.”

So after taking a short notice fight in March against Vince Cachero in the LFA promotion and winning that in less than two minutes, he didn’t have an issue when his phone rang the following Monday, asking him if he was willing to fight that Saturday night against Ray Borg in the UFC.

“I show up to fight whether I’ve got eight weeks or five days,” he said. “At that point, I had taken the fight (against Cachero) the weekend before on short notice, too. I think it was like a week and a half out for the LFA title fight, so I was just on a roll with the short notice thing. I went to training Monday morning and happened to get a phone call. I knew there was a reason I went to training. (Laughs) And it was only a minute and a half fight (against Cachero), so there wasn’t any damage to my body.”

But this was the UFC, the big show, the place he had targeted ever since he put four-ounce gloves on. And he was going to be facing a former world title challenger in Borg. What about the first-time UFC jitters?

“I’m about that ‘staying ready’ life,” said Kenney. “When I say I’m ready, I am really ready. A lot of guys aren’t ready when they step in there. My fighting speaks for itself.”

And it did on that night in Philadelphia, as he won a unanimous decision over Borg to start his UFC career off on a winning note. On Saturday, he looks to make it two for two when he faces unbeaten Manny Bermudez, and while fans are expecting big things out of this clash on the UFC 241 card, Kenney does want to make a note about his 12-1-1 record. 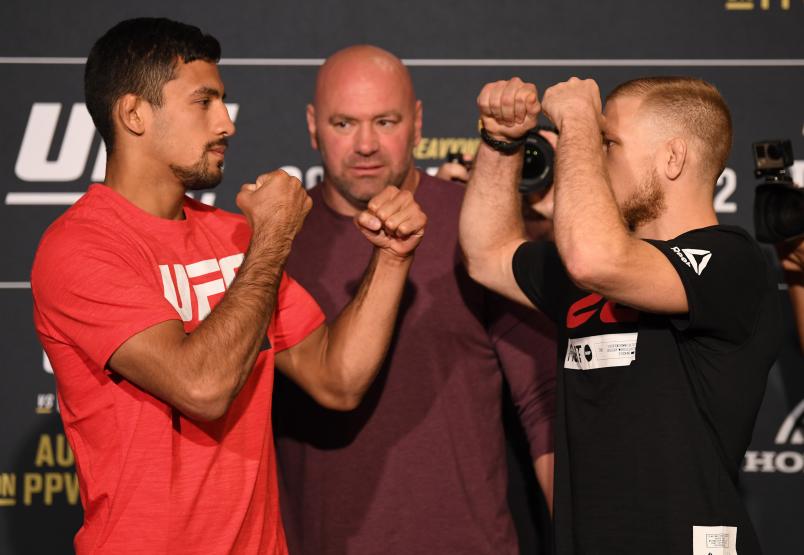 “I consider myself 14-0,” said Kenney. “My only loss is that one on the Contender Series (against Adam Antolin), and fighting a guy who’s 14-0 at UFC 241, which I’m considering the Super Bowl of the UFC this year, what better way to become a top prospect in the division than to go put this dude away and get a highlight reel finish, end up on ESPN and ride the wave from there. Then maybe I have to call out Urijah Faber.”

Kenney laughs, but he’s dead serious about all of it – from putting Bermudez away to calling out a UFC Hall of Famer, and especially about his record, which saw him fight to a draw with recent UFC signee Bruno Silva in 2017 and then lose to Adam Antolin in August of that year.

The Antolin fight is the one that really stings, as it was his second shot to earn a UFC contract on Dana White’s Contender Series. On episode two of that first season, he decisioned CJ Hamilton but didn’t get the call to the Octagon. Instead, he was brought back six weeks later to face Antolin. Again, the fight went three rounds, but this time, a split decision went against Kenney. It was a disputed verdict, and one that cost the Indiana native.

“(UFC President) Dana (White) told me that he thought I won the fight and to go get some wins,” Kenney said. “So I went and got four wins in a row and still hadn’t gotten the call. I just gotta keep grinding. They’re gonna take me one way or another.”

They did, and while it was short notice, Kenney made the most of his opportunity.

“I really like the way I came into the UFC,” he said. “I matured a lot, it’s a whole new weight class, I got some good wins under my belt and I came in with a boom. That’s the way I wanted to come in.”

Now he wants to keep the momentum going, all the way to the top of the class. It’s been a 22-year journey, and it’s about time to cash in and pick up a belt.

“That’s something I’ve been working for,” he said. “I moved across the country and I left college to come chase a dream and it’s working out. So it would mean a lot. I’m after that UFC gold.”