Over Seven UFC Appearances, Bantamweight Continues To Make A Name For Himself
By Thomas Gerbasi, on Twitter: @TGerbasi • Aug. 2, 2021

Casey Kenney has never been someone content to sit back and watch life happen. He had to be a part of the action, chasing glory in whatever competitive endeavor he could find.

“I've been a competitor since I was five years old,” said the UFC bantamweight. “Eight, nine years old, I wanted to be one of the first American judo gold medalists and I've been training to be the best in the world since as far back as I can remember.”

The Olympics may not have panned out for the second-degree judo black belt, but mixed martial arts is going just fine for the Indiana native. Yet after a stretch in which he fit his first seven UFC fights into a little less than two years, Kenney decided a little break was in order following a March loss to Dominick Cruz. 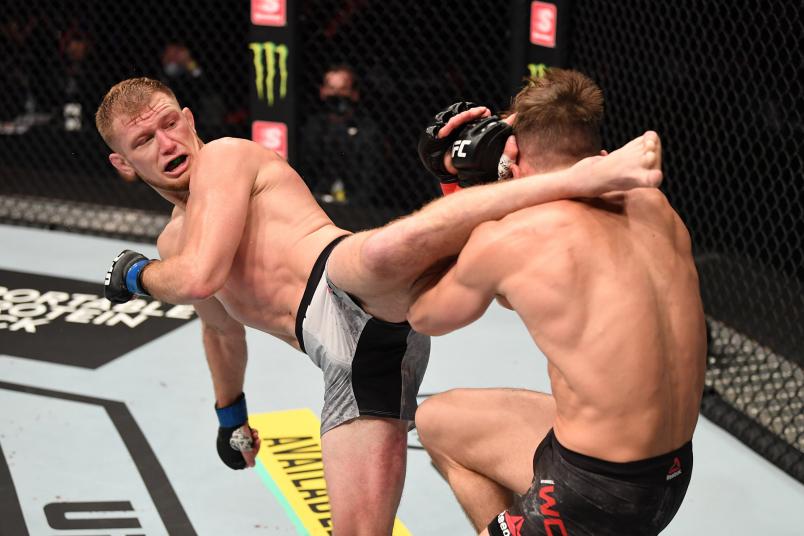 “That was my 20th professional fight in six years, so I've been busy for a lot of years,” he said. “It's been seven years since I've been scheduled to take a full month off. I got my month off after Dom and then got back to work. There's no stopping now, but I think it's always good to let your body rest a little bit before you come back strong.”

So what did Kenney do with this foreign concept known as a vacation?

“I hiked out in Sedona a little bit, I had some good food, partied a little bit, enjoyed some time with some friends - normal human being stuff,” he laughs.

That sounds like it could be dangerous, because that normal human being stuff can become addictive and make someone not want to rush back to the gym. 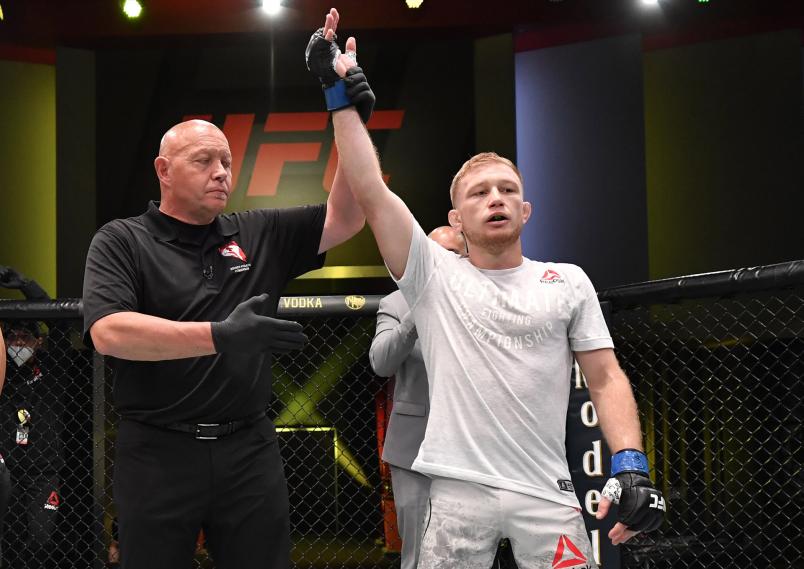 Casey Kenney celebrates after his submission victory over Louis Smolka in their bantamweight fight during the UFC Fight Night event at UFC APEX on May 30, 2020 in Las Vegas, Nevada. (Photo by Jeff Bottari/Zuffa LLC)

Why shouldn’t he? He’s one of the best fighters in one of the UFC’s toughest divisions, and he’s opening up this weekend’s UFC 265 pay-per-view main card against Song Yadong. And when he does so, he’s stepping into the Octagon as a 30-year-old ready to kick off his prime years.

“I think this is the next step of my career,” said Kenney. “Obviously, I've been in the UFC for a couple years now, but that was the climb-up and my first run in the UFC. I just fought Dominick Cruz in the last fight, I'm about to kick off a pay-per-view, so I'm right exactly where I want to be, but I think the 30s are where I build my legacy in the UFC. I'm planning on being here a long time and obviously I'm still after that belt, but I think this is kinda where I establish myself as a legend of the sport.”

The beauty of where Kenney is right now is that he can make good on those hopes despite a couple setbacks. Just look at fighters like light heavyweight champion Jan Blachowicz and lightweight champion Charles Oliveira, both of whom had both peaks and valleys in their careers before obtaining UFC gold. And let’s not forget that the greatest woman to ever compete in combat sports, Amanda Nunes, was once 9-4 as an MMA pro after a 2014 loss to Cat Zingano.

So, Kenney has time, and if anything, the biggest fight of his career against Cruz showed him that he did belong among the elite, even if he did come up on the wrong side of a split decision verdict at UFC 259. 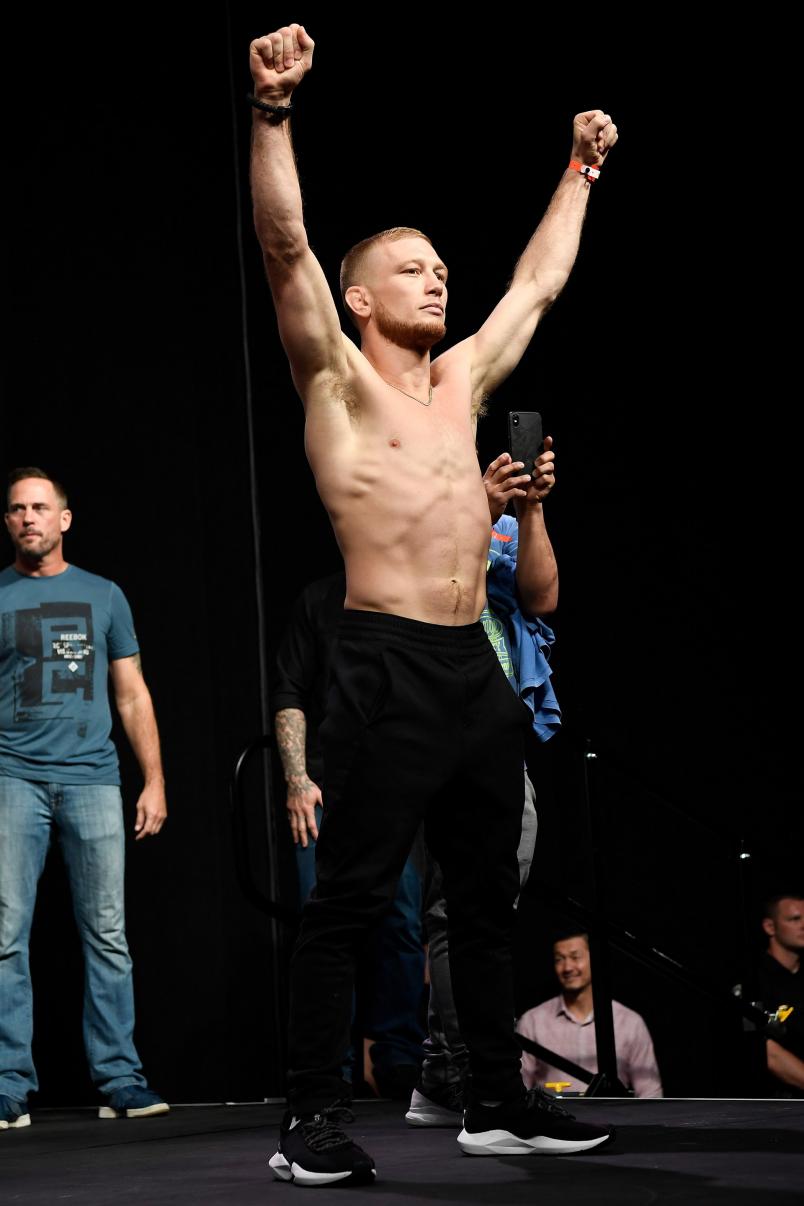 Casey Kenney poses for the media during the UFC 241 weigh-in at the Anaheim Convention Center on August 16, 2019 in Las Vegas, Nevada. (Photo by Mike Roach/Zuffa LLC)

“It was all a great learning experience,” he said. “The hype behind Dominick Cruz, the big spot being the headliner on the ESPN card, honestly, it all felt normal. It felt like a normal fight. Obviously, the decision didn't go my way, but as far as a performance, I don't know many people that stuffed all of Dominick Cruz' takedowns for the first two rounds and not many people busted up his face, so I got to do both of those and the decision didn't go my way, but I can be happy with what happened. And I definitely learned a lot about the other side of it with the media and all that stuff, but I think I handled it really well. It's one of those things that you put in your back pocket for later use as far as experience.”

Starting now. If Kenney keeps performing like he has in racing out to a 5-2 UFC record, there will be more pay-per-view appearances, more big opportunities and more fights against the 135-pound elite. That could be intimidating to some, but that’s what Kenney has been chasing in one way, shape or form since he was a kid. And when he got the chance to fight the UFC’s first bantamweight champion, he knew that the days of opening up a prelim card were likely over.

He likes that new normal.

“That's exactly what I said when I signed on the dotted line for the Dominick Cruz fight - well, there's no going back now,” he said. “All these years, the road I took to get in the UFC, and now everything that's happened has led to this point. I'm ready to not look back. Some people get there and they need to take a step back and assess things and evaluate things, but I'll make a couple adjustments and I think I'll make a good run for the title. I've done everything that I'm supposed to do, and it's all played out perfectly.”