Casey Kenney doesn't want to be sitting on the sidelines anymore while there's fights going on. He wants to be a part of the craziness
By Thomas Gerbasi, on Twitter: @TGerbasi • May. 28, 2020

May the Writing Gods forgive me for using this phrase, but as the UFC returned to action earlier this month, Casey Kenney may have been suffering a bit of FOMO as he saw three fight cards take place in eight days.

“I watched the UFC be the first sport back and I was stoked as a fight fan just to be a part of that, but I wanted to be in there, too,” he laughed. “While all the other sports are sidelined, we're in there doing our thing with no crowd and on ESPN when there's nothing else going on. It's a great stage to showcase my skills. And the craziness makes me want to fight even more.”

That craziness is the COVID-19 pandemic that put all major sports on pause until the UFC returned on May 9. And even though he wasn’t going to get a couple months to train for a bout with Louis Smolka this Saturday in Las Vegas, the 29-year-old bantamweight prospect has no issues with that at all.

“I feel like a 10 to 12-week camp kinda wears on me mentally, so I like to short notice it,” he said. “Obviously, I came in with the debut like that and it's my world. I feel like I'm always ready to fight, I know when I'm gonna perform well, and that's when that Octagon door gets closed. It's some crazy times, but I think this is a good step. The UFC getting back on, that was great to getting back to normal, and now I get to be a part of it as well, so I'm super stoked about that.”

Kenney’s enthusiasm is matched only by that of his opponent, with Hawaii’s Smolka also having no problem with a short training camp conducted in the midst of a pandemic. The way he sees it, fighters fight, and when those fighters are all in the same boat, it’s a level playing field that should result in a memorable scrap.

“He's got a good style and I've watched him for a long time,” Kenney said of Smolka. “Chris (Cariaso), one of my coaches, fought him six years ago. That was when Louis was undefeated and up and coming. So he's a guy I've known about for a long time. I think I was an amateur at that point, about to turn pro when that fight went down. But I’ve got nothing bad to say about him and it’s nothing personal; it's all business and I'm sure he feels the same way.” 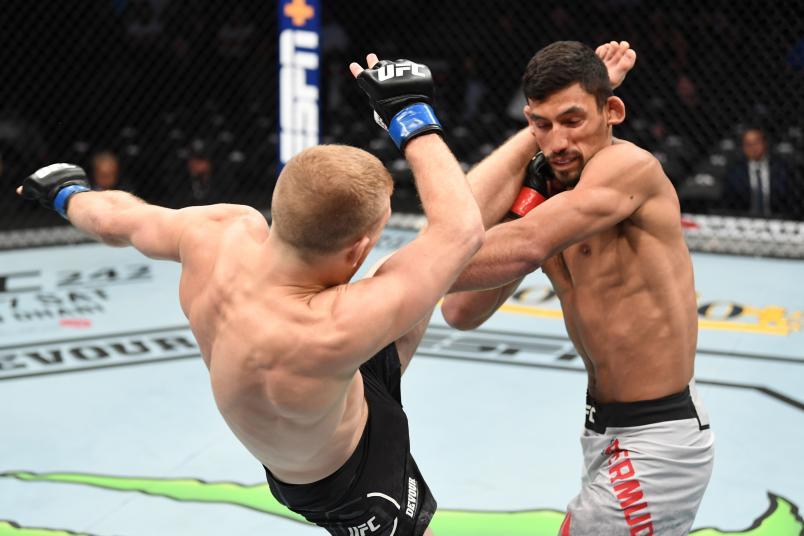 That doesn’t mean the two bantamweights won’t be throwing down when the Octagon door shuts at the Apex, and that’s exactly the fight Kenney wants after he saw his six-fight winning streak snapped in a grappling-heavy affair against Merab Dvalishvili in February. It was a disappointing result for the Arizonan, but he’ll chalk it up to experience and move on to a fight he expects will have more fireworks.

“I went back and watched it a bunch of times and the best way I can explain it is if I was on the other end and I won - and nothing against Merab, it's his style - if you had to tell somebody okay, I won a fight. Well, did you punch him a lot? No. Did you kick him a lot? No. Did you elbow or knee him? No. Did you ground-and-pound him? Maybe like once or twice I hit him. Did you have him in a bunch of submissions? No. Well, how the hell did you win?”

Kenney laughs, but he knows where he went wrong in New Mexico.

“I felt like I did pretty good for the most part,” he said. “I stuffed a ton of takedowns, but one major one did it for me, and in the third, he kind of got some dominant positions, I will say that. Up until the very end of the fight, he was taking me down but wasn't really establishing top control. We were just kind of stuck there. On the flipside, I'm trying to make things happen. It was frustrating, but it was something that I knew. I knew what I was getting into and I knew that was what Merab likes to do and it didn't quite go as planned. I got into that headhunting mentality of trying to take his head off with one or two punches and that's when he noticed that and started shooting in and timing my punches. I stay creative there like I normally am and I think it's a different fight. I got lost in trying to put on a show and knock somebody out.”

There’s nothing wrong with that. That’s why fans are expecting big things from Kenney vs. Smolka on Saturday. So is Casey Kenney.

“I didn't feel like I got beat up in the last fight,” he said. “So it was hard to be down on myself. But it fueled the fire. You're only as good as your last fight, and I'm looking to erase all that this weekend.”