Carmouche Proud To Be Part Of A Change For The Better

"When I came out, I had the hesitance, but just because the community and society then wasn’t as accepting of everybody in the community. Now I don’t see that at all. There’s not even a second guess about it and that is so awesome to see.”
By Thomas Gerbasi • Jun. 14, 2019

When people talk about Liz Carmouche these days, the focus is on the No. 3-ranked flyweight contender’s place in the 125-pound title picture, her 2010 win over current champ Valentina Shevchenko or her upcoming bout with Roxanne Modafferi next month.

It wasn’t always that way. In fact, it wasn’t that long ago that the idea of someone being an openly gay fighter was something that scared some people, and Carmouche experienced that ignorance up close.

“In the beginning it was really difficult,” she said. “Especially because once I was out of the Marine Corps, I didn’t have to be quiet about my preference. The whole time I was in the Marine Corps, I was constantly looking over my shoulder. So I finally felt like I could be so open and not be hiding a part of myself. And then I went to fight in Mississippi and saw the judgment on me.” 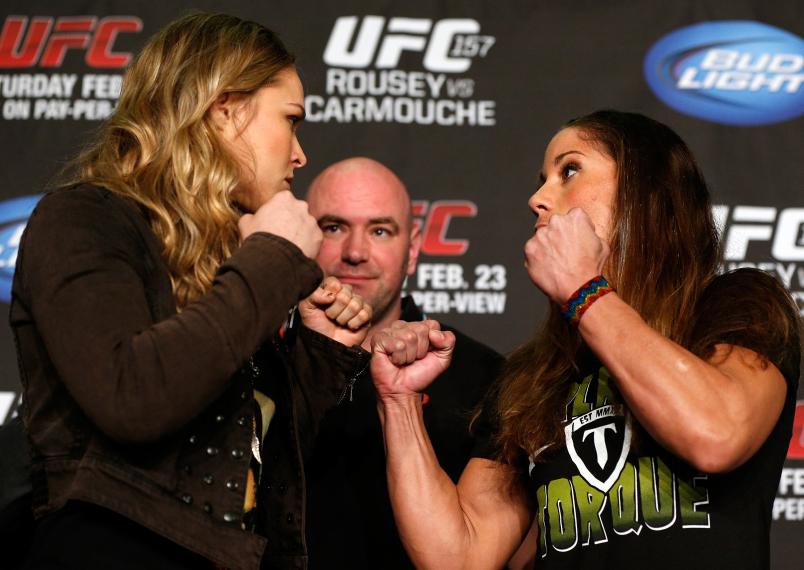 Wearing rainbow in the lead-up to her 2010 fight, the unbeaten bantamweight prospect was shocked by the reaction she received.

“Why are people giving me bad glares?” she asked her coach.

“Because you’re gay,” he said.

“Somebody even went and closed the door on my face and I was like, ‘Was that an accident?’” recalled Carmouche. “My coach said, ‘No, they did it on purpose.’ Really? Why does that matter? I’m being polite to them – why would you be that way? So it was really mind-boggling for me that people still have that level of ignorance and that level of living in fear about the unknown that they treat people the way they do. It makes no sense to me.” 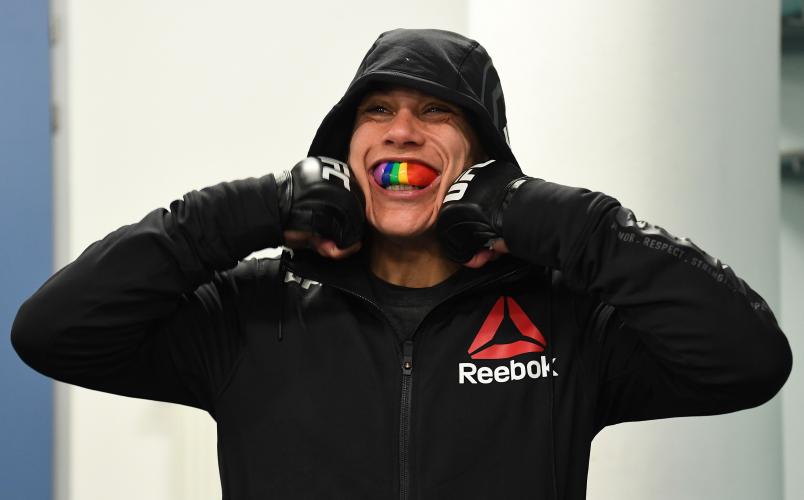 PRAGUE, CZECH REPUBLIC - FEBRUARY 23: Liz Carmouche warms up prior to her bout against Lucie Pudilova of Czech Republic during the UFC Fight Night event at O2 arena on February 23, 2019 in the Prague, Czech Republic. (Photo by Mike Roach/Zuffa LLC/Zuffa LLC via Getty Images)

PRAGUE, CZECH REPUBLIC - FEBRUARY 23: Liz Carmouche warms up prior to her bout against Lucie Pudilova of Czech Republic during the UFC Fight Night event at O2 arena on February 23, 2019 in the Prague, Czech Republic. (Photo by Mike Roach/Zuffa LLC/Zuffa L

Three tours of duty as a United States Marine established Carmouche’s toughness long before she put four-ounce gloves on professionally, but going through times like these and still finding a way to perform on fight night took things to a new level. And what the Californian didn’t know at the time was that she was laying the groundwork to become not just a world-class fighter, but a role model for people going through the same struggles she was. That would only come in time, though.

“I know I had my own questions and my own doubts coming out because of the community that I grew up in,” Carmouche said. “I went to Christian schools – elementary, middle school, high school – and then I was also in the Japanese culture that doesn’t believe in PDA and I had never seen gay couples. I heard about them, seen them in movies and stuff, but I never experienced seeing them in person. So as I started to realize things about myself, I had questions, but didn’t even have the typical questions because I had never experienced anything and had no awareness. And as I started to, I wondered why it mattered, why does that make anybody different. They’re still human, still a person, so why does it matter? Who cares, they’re not hurting anybody, so it shouldn’t matter.”

It shouldn’t, but that wasn’t the case for so many years. Yet by the time Carmouche followed up runs in Strikeforce and Invicta FC with an invite to fight Ronda Rousey in the first women’s bout in UFC history in 2013, the world was ready for “Girlrilla.” All of her. And the LGBTQ community responded in kind, embracing Carmouche’s historic accomplishment.

That was a shocker to Carmouche, who didn’t just have to deal with fighting Rousey, but with a barrage of media attention.

“It was really weird for me,” she said of the pre-UFC 157 attention she received. “Growing up, I had never seen gay people. So for me to then turn around and be a spokesperson for a community that I was still learning about and still coming out to was a big thing for me. I never thought, not even dreamt, about being in a position where I would be a role model or a spokesperson for people. Because the way I grew up, I had never seen that before and I was still discovering myself. It was really shocking. A lot of times I had questions from people I didn’t have answers for because they weren’t experiences I had ever had.”

Carmouche took it all in stride and accepted the attention with grace. She didn’t win the UFC women’s bantamweight title that February night in Anaheim, but she made an immediate impact, and it was clear that she wasn’t going anywhere. More than six years later, the world is a different place for Carmouche and the LGBTQ community, and it’s a good different for this flyweight contender.

“I have seen a positive change,” said the 35-year-old as the celebration of June’s Pride month continues. “I’ve had a lot of people that have reached out to me and told me how me being open and coming out the way that I did gave them the confidence to be able to speak out and come out for themselves. And, for the most part, a lot of people experienced positivity and acceptance from their families. When I came out, I had the hesitance, not only because of ‘Don’t ask, Don’t tell,’ but just because the community and society then wasn’t as accepting of everybody in the community. Now I don’t see that at all. There’s not even a second guess about it and that is so awesome to see.”