Animosity in the crowd isn't going to bother Liz Carmouche. After an impressive win over Jennifer Maia, she has dedicated herself to training full-time
By Gavin Porter • Feb. 21, 2019

Fighting in your opponent’s home country is an experience that Liz Carmouche is more than okay with. Every extra boo and any animosity will help motivate her when she faces Lucie Pudilova in Prague, Czech Republic.

Carmouche is looking to win her second fight in a row, as she follows up her impressive victory over Jennifer Maia at UFC Boise last July. Since then “Girlrilla” has been able to dedicate herself to training full-time, a luxury she has never had as a professional fighter.

And she’s expecting it to pay dividends.

“This is the first time that my whole focus is just training so I was actually able to go to different gyms and experience different training partners,” Carmouche said. “I was able to really focus on all my weakness and make sure that I fine tune them. And also just try new things that I’ve never done. So I just feel like I’m a completely new fighter that people won’t recognize.”

We caught up with Carmouche to talk about fighting in the Czech Republic, what she thinks about Pudilova and how she’s managed to continue growing as a martial artist.

UFC: You’re part of the UFC’s first ever fight card in the Czech Republic. What does that feel like?

LC: It’s crazy to do another event for history. It’s such a beautiful place, the history behind it behind it and the architecture. Just everything. It’s been one of my bucket list places to visit so it’s great to actually fight here.

UFC: What do you think the walk out will be like?

LC: I imagine the energy will be similar to that of the Ronda fight where it’s just excitement for the whole crowd. I think if there is any booing, which can be expected when you fight in other countries, I don’t anticipate much due to the excitement of the event and the fact that this is a new experience.

UFC: What kind of fighter are the fans going to see on Saturday?

LC: I think that’s difficult because each fight I feel like I’m evolving I’m bringing out something different stylistically. I think that the more people try to put me in a box and describe the more I try to evolve outside of it. 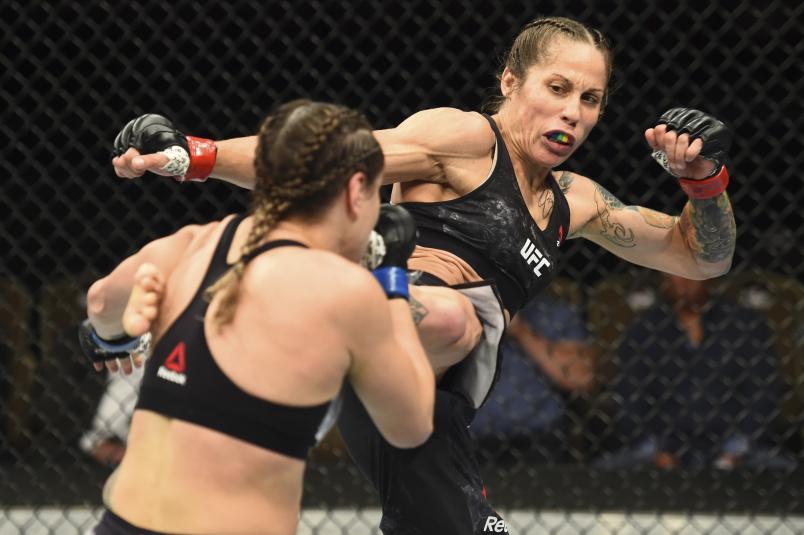 UFC: Where do you see the advantages in your match-up with Lucie?

LC: She’s known for being a good striker and I know that she’s brought in an Olympic wrestler to help her prepare. I’m really looking to the challenges that she’s been trying to grow in to try and overcome those. But like I said I’ve really been working on fine tuning myself as well and growing and making sure I evolve. I have a lot to bring to the table in this fight.

UFC: You kind of get to play the villain role since Lucie is from the Czech Republic. Is that fun for you?

LC: It’s fun to be the villain in the sense that booing only fuels me more. If they do it’s really going to come to the cost of my opponent. The booing just make me work that much harder to instill pain upon my opponent.

UFC: You’ve been in the fight game for quite a while, but after a win like you had in Boise does it feel like you’re kind of just getting started again?

LC: If nothing else, my awareness more of my body and how to take care of it properly. In the beginning I was just beating it and abusing it like the marine that I was with no consideration to long term. And now I definitely think more to the future and I do the things necessary. And I’ve noticed the difference. Also in my body, I feel like with every fight I’m getting in better shape, I’m getting stronger and getting faster. And at 125 I feel that much better. So I feel like there are a lot more fights ahead of me and I’m certainly not out for the count.