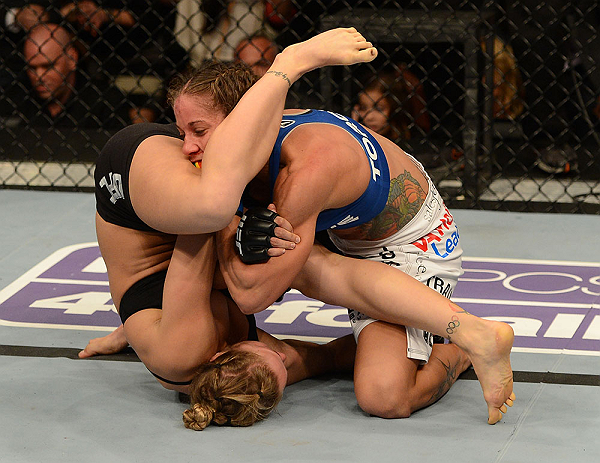 She laughs at such a suggestion.

“If I had known that’s all it would have taken, then I would have let everything fall down and be like, ‘I’ll let it all go and just wait it out,’ because eventually this awesome opportunity is gonna wait for me and I can just take grasp of it and run with it.”

Obviously that isn’t the case with the No. 9-ranked women’s bantamweight contender, who faces Katlyn Chookagian at UFC 205 on November 12 in her first bout since a win over Lauren Murphy in April of 2015.
RELATED CONTENT: Carmouche fighter bio | Matchup with Katlyn Chookagian

“It seemed like the timing of life,” she said of her absence. “Everything came to a climax all at the same time and a heavy wave swept me out to sea and I finally made it back to shore. Between business issues, family issues, medical issues, you name it, anything underneath the sun, it all decided to smash me all at once. So I had to kind of step aside from everything and focus on that. But I was able to get everything in order and now I am back on the grind harder than ever.”

Making the call to put a momentary halt to her fight career was a bold one, but instead of trying to fight while distracted and then ending up with a bunch of losses, Carmouche made the right move, as the United States Marine Corps veteran is well aware that a fight career doesn’t last forever, so it was time to pay attention to life outside the Octagon. Not that it was easy.

“It was really difficult, but if there’s one thing that I’ve learned is that with our fight life, it’s such a short-lived period,

and at any moment it can be stripped from us,” she said. “So I own and operate a gym full-time, and whether I have a bad training day or not, I still have a job I have to do. If I got in a car accident and I was a paraplegic and my fight career was over and that was the only thing I was banking on, that would be it for the rest of my life and I’d be screwed. And that’s the realization I had. I have the ability to realize that whether it’s that I retire or something terrible happens, I have to be prepared for a long life and a future ahead of me with a real career that’s gonna be there for me. I give everything I have to fighting – I always have and I always will – but I also have to prepare for the idea that it may turn out that I’m going to live to 80 years old and I’m gonna need something there for me. So I’m trying to prepare for that and help take care of my family.”

At 32, Carmouche has a long way to go before 80, and there’s still plenty of time left in her fighting life, which she is happy to get back to next month. Add in that she gets to return in Madison Square Garden, and that has amped up her excitement level, especially since she helped in the fight to get MMA sanctioned in the Empire State.

“A few years ago, I was one of the fighters that they brought to go to Albany and help lobby to legalize MMA in New York,” she said. “And one of the things I said when I was leaving there was, ‘Man, I really hope that this pays off and that I can be one of those fighters that’s fortunate enough to make history and be one of the first fighters to fight in Madison Square Garden.’ That’s everybody’s dream. Anybody that’s ever watched boxing or MMA, that is the place to be. My mom was born and raised in New York City, and to be able to fight for her and fight there and bring that to all of our family that’s wanted to see this, that’s a gift to me. I’ve been to Madison Square Garden. That’s a beautiful place, and I can make history now and be there.”

As for her opponent, rising star Chookagian, Carmouche knows that she’s in for a tough fight, but after being away for so long, she would have fought anyone, and she let UFC matchmaker Sean Shelby know it.

“I was kind of nagging him.”

That’s okay. It shows that the time away hasn’t dulled Carmouche’s fighting spirit. If anything, the break has ignited that fire.

“We all go through different difficulties in life, and every time we can come out on top and survive through it and only get sharper through what we’ve learned, it makes us better people. It shows us our character and what we’re made out of, it makes us stronger, and that’s exactly what it’s done for me.”