One day, someone’s going to write a book about Liz Carmouche and they’re not going to be wanting for compelling material from a compelling life. But the 35-year-old flyweight contender isn’t interested in looking back yet.

Fair enough. Maybe that’s why “Girlrilla” is still adding chapters to her story long after most would have said, “Okay, that’s good enough, I’m done.” And even though she’s starting to make moves up the flyweight ladder heading into Saturday’s bout with Lucie Pudilova, the Californian is as hungry as ever.

“I’m never under the mindset that in this sport that I can grow stagnant and level out,” she said. “We have too many fighters that have these opportunities. Look at Nicky Ryan competing in jiu-jitsu. He’s been doing it since he was four, he’s 17 and he’s destroying ADCC. So if I think I can sit still for one moment and not continue to grow, I’d be stupid to do that and I’m setting myself up for failure. But I also train with people like Ilima-Lei Macfarlane, who is a champion, and so many other people that are striving for greatness that I can either get surpassed by them or I can grow with them, and I choose to grow with them and all of us just sharpen each other and get that much better. So it keeps me on my toes at all times, and I never want to be the fighter that doesn’t evolve as a fighter.”

Winner of three of her last four, Carmouche finished up her run at bantamweight before moving to flyweight in late 2017, and after a split decision loss to Alexis Davis, she bounced back with a win over Jennifer Maia last July. In the UFC’s newest division, that’s good enough for a number six ranking, and given the fact that she already holds a 2010 win over champion Valentina Shevchenko, a win this weekend could put Carmouche in the title conversation. That’s a conversation she wants to be in, especially since the current talk with casual fans still focuses on her historic Octagon debut six years ago.

“People go, ‘Man, I remember that fight’ And there’s only one fight that anybody’s ever talking about, and it’s always the Ronda (Rousey) fight,” she laughs. “You know that I’ve been fighting six years since then? There’s been more than just that fight, I promise you. So just to put a new image in somebody’s mind is gonna be that much sweeter.” 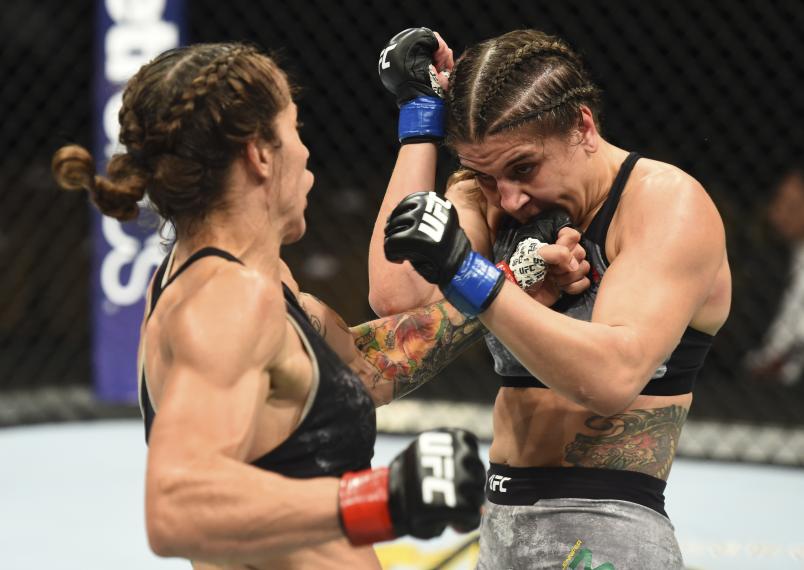 And getting to do it against Shevchenko wouldn’t be a bad thing either, considering there a little heat between the two flyweight standouts.

“There’s some animosity on her part where she feels that it was an unfair call,” Carmouche said of the 2010 bout. “I cut her eye and it was bleeding into it, so they had to stop it, so she wants to prove something. And if there are any doubts in anybody’s mind, let’s do it again and really show everybody. There’s not gonna be any questions, no doubt, it’s on video, everybody in the world will see it, and let’s put this to rest.”

Sounds like a plan. But Carmouche has to beat Pudilova in the Czech Republic native’s home country first. No problem, says Carmouche, even if she has to wear the black hat and hear some boos in Prague.

“It’s always more motivation for me,” she said. “I love coming in as the underdog and kind of the disliked person. One of my fights in Mexico, I was booed by the entire stadium, and that just made it that much more violent. It lights a fire in me and so I look forward to it. I really hope they boo me because it will be at the cost of their fighter.”

Fighting words, indeed. But it’s not personal. Just business for someone with gold on her mind.

“I’m always goal-setting and I’m always rushing to get that belt,” Carmouche said. “That’s my end goal at all times, so anything that gets me one step closer. I’m definitely not overlooking my opponent on Saturday, but I certainly am letting this be the next step towards title contention.”