After A Dominant UFC Debut, Guyana-born Welterweight Carlston Harris Is Ready To Rise To The Next Challenge In Impa Kasanganay At UFC Fight Night: Smith vs Spann
By McKenzie Pavacich, on Twitter @mpavacich_ • Sep. 16, 2021

Unfazed by the circumstances that could add an insurmountable amount of pressure to his plate, Carlston Harris doesn’t allow himself to focus on anything but succeeding.

Making his UFC debut in May after a decade-long professional career, Harris became the first and only athlete to represent his native Guyana inside the Octagon, and did so in emphatic fashion, with a first-round submission win over Christian Aguilera.

“I don’t have any pressure; I take it one step at a time. One fight at a time. It’s just another fight. I get in there and do what I train in the gym,” Harris told UFC.com during his fight week interview ahead of UFC Fight Night: Smith vs Spann. “My plan when I get in the cage is always to not leave it up to the judges.”

Riding a four-fight winning streak, all of which have come by way of finish, “Moçambique” is looking to build on the momentum he’s built in the four months since making the walk to the Octagon for the first time. 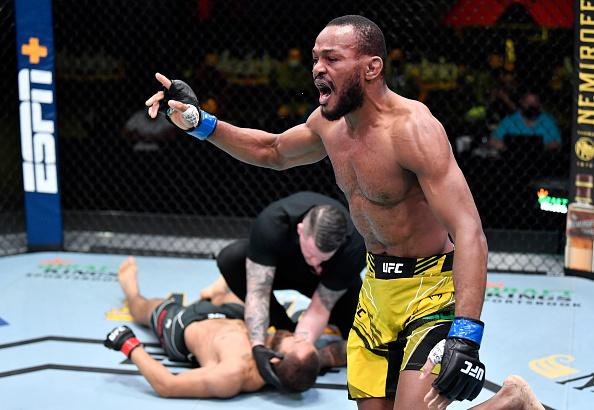 “I utilized (the wins) as motivation and tried to get better every day, because I know there are going to be a lot of guys watching me, so the lions are there,” the Rio de Janeiro resident said. “They’re hungry and want a piece of me, so I try to get better in all areas.”

Since submerging himself in the depths of the UFC’s welterweight division, Harris explained that his training has been elevated in a number of ways, but especially by the athletes he shares his gym with.

“Every day in the gym, they’re coming at me hard. I’m feeling the training, feeling it get harder every day. I know that with hard training in the gym, you will feel more confident when you get into the cage.”

While it’s something he’s never really lacked, confidence will be key for Harris heading into this Saturday’s matchup against former middleweight Impa Kasanganay, who is also making a sophomore showing in the welterweight division.

"I take one step at a time, one fight at a time. It's just another fight to me, man."@CarlstonMMA is taking a measured approach ahead of #UFCVegas37 where he proudly reps for his native Guyana.

“He’s dangerous because he comes forward and has shown that overhand right is very dangerous,” Harris explained. “But it’s a fight, anything can happen. As fighters, we get back into the gym to improve and to bring new things to the table.

“I think I’m better than him in grappling and the movement on the feet. And the takedown defense, too. I have a solid gameplan.”

While Kasanganay has more Octagon time than Harris, the 34-year-old has twice as many professional fights with wins over names from the UFC roster like Wellington Turman and Michel Pereira — experience he believes will make the difference.

“It’s great experience because it shows you both sides of fighting. It shows you victorious and in loss. It shows you how you might deal with loss, because it’s not easy to deal with. People get frustrated when they lose,” Harris said. 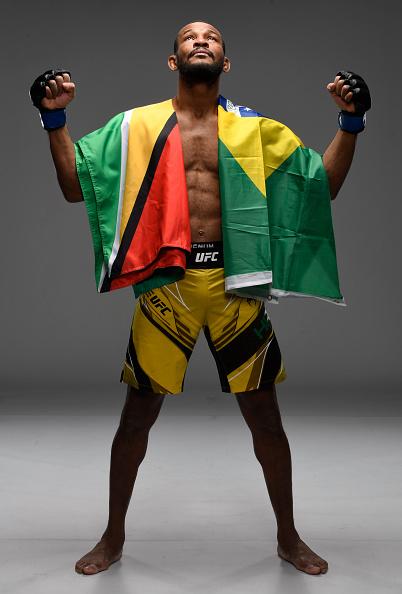 Carlston Harris poses for a portrait after his victory during the UFC Fight Night event at UFC APEX on May 08, 2021 in Las Vegas, Nevada. (Photo by Mike Roach/Zuffa LLC)

“Sometimes you have doubt in yourself, but when you are a true martial artist, you overcome that doubt. When you suffer a loss, the doubt comes, and then you get back in the gym and start to build confidence. My goal has always been to make it to the UFC, and I made it because I never quit.”

The “never quit” mentality quite literally transcended Carlston Harris from a country that doesn’t have any organized martial arts to the pinnacle of the sport, and he doesn’t plan on quitting any time soon.